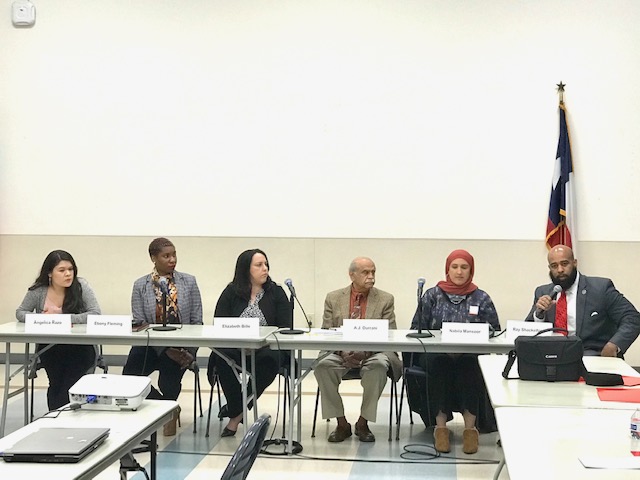 Houston, TX -- Houston may already be the third most populous city in the United States, elbowing aside broad-shouldered Chicago and trailing New York and Los Angeles as first and second, respectively. We won’t know until the 2020 census is concluded.

“In most parts of the country, there has been little or very modest growth, but not in Texas,” said Dr. Richard Murray, a political science professor at the University of Houston speaking to a convening of census advocates and experts co-hosted by Houston in Action, the Leadership Conference Education Fund and Ethnic Media Services. “By far, we’ve added more people, according to the [Census Bureau’s] Community Survey, than any other state.”

Texas may have gained as many as 4 million people since 2010, Murray said.

The convening represented the first formal briefing about the 2020 census for and with news outlets representing a broad spectrum of audiences from Hispanic, African American, Chinese, Vietnamese and Korean to Nepalese, Asian Indian, and African diaspora communities.

Echoing the sense of pride in Houston’s growth, many speakers called the census an opportunity for the city's increasingly diverse communities to stand up and be counted. A large percentage of the state’s growth stemmed from Latino births and immigration, but its fastest growing demographic is the Asian American community, according to Nabila Mansour of the Empowering Communities Initiative.

“We’ve had about 128% growth from the year 2000,” Mansour reported. “Asian Americans in Texas, we’re about 1.5 million, and 27% of Asian Americans live in Harris County or Fort Bend.” Houston is the county seat of Harris County, Richmond, Fort Bend’s County’s seat, is less than 40 miles away.

Mansour said her organization’s staff spend a lot of time going into East and South Asian communities to educate them about the importance of the census, especially since residents who arrived in the United States after 2010 may have had no experience with a census in their country of origin.

Numbers matter. The aggregate per person count is used to calculate the annual federal dollar allotments Texas counties and cities will receive to fund many state and local programs, from Medicaid to hospital and school construction and road building. One estimate is that Houston alone would lose $3.78 billion in federal funding between now and the 2030 census if the city’s population is undercounted by 10%.

Within the 254 Texas counties, 25% of Texans live in Hard to Count (HTC) communities or neighborhoods, regions or populations with historically low response rates during previous censuses, said Katie Lightfoot of the Center for Budget and Policy Priorities. “Kids under five, immigrants, people of color, families that move frequently, non-English speaking communities, low-income households, people in rural areas, renters, complex households – the list goes on and on,” Lightfoot said of HTC tract characteristics.

HTC communities are fairly ubiquitous in Texas. For example, the Vietnamese who rely on fishing or other economic activities linked to coastlines, often reside in rural areas more difficult for census-takers to canvas, noted Jannette Diep of Boat People SOS, and they are less likely to have access to computers or the Internet to avail themselves of the Census Bureau’s highly touted online census survey.

Changes in funding programs is just one result of an undercount. Population also determines reapportionment. If the census captures the state’s growth, experts project, Texas could add another two or three congressional seats to its delegation in the U.S. House of Representatives, Murray noted, and likely one more seat in the state legislature as well. And, there is redistricting, redrawing the boundaries of congressional districts so the numerical representation in each is roughly proportionate.

Panelists cited cross-cutting issues they think make this census particularly challenging and that could depress the response rate. Foremost, they said, has been negative reactions to the Department of Commerce Secretary’s attempt to include a census question on citizenship. Despite the 2019 judicial ruling that prohibited that action, participants across the ethnic groups they represented said “the damage has been done.”

A.J. Durani, of Emgage-USA, said President Trump’s remarks on his first presidential campaign trail and his subsequent actions since in office, particularly the Muslim travel ban, have had a chilling effect on his organization’s membership.

“These actions,” Durani stated, “have resulted in fear, apprehension, and trepidation among the Muslim community for any initiative of the current government, especially those whereby information or data are collected on individuals, that is, by the census.”

Durani said Emgage-USA, a multi-state organization, with chapters or a presence in California, Florida, Illinois, Michigan, New York, Ohio, Pennsylvania, Texas, and Virginia, seeks to promote civic education and engagement. He noted that although approximately a quarter of the Muslims in the greater Houston area are non-immigrant African Americans, the majority are immigrants from Asia, including Bangladesh and Indonesia, the Middle East, North Africa, and other countries in Africa with predominantly Muslim populations, like Somalia and Sudan.

Throughout the convening, trust -- or rather mistrust -- was a pervasive theme and one not solely relegated to immigrant communities. Ray Shackleford, representing the Houston chapter of the National Urban League, and national president of the Urban League’s Young Professionals, said mistrust of government is prevalent within the city’s African American community as well.
“I think there is general mistrust when you’re talking about the government, and it’s a challenge because it’s something that’s well founded when you look at the history of government’s interaction with black people and, honestly, its communities of color overall.”

Shackleford, who has worked with Houston’s homeless population, outlined a scenario of a renter who has two people on the lease but shelters six in the apartment. “You don’t want to put that down on the census if you think it’s going to get into the hands of the landlord and they’re going to try to evict you.”

The lack of state funding to support census outreach was another issue raised at the convening. Shackleford said he recently attended a Houston meeting of professionals of Caribbean descent where he polled attendees informally on how much money they thought the Lone Star State had committed to outreach. Because of Texas pride, “they threw out big numbers,” Shackleford said, but were dumbfounded to learn the answer is zero.

In 2019, Houston Mayor Sylvester Turner wrote to Texas Gov. Greg Abbott requesting funds for census outreach. Past Texas governors invested in census public education, but Abbott has declined to do so. With less federal revenue committed to the 2020 census than many longtime census observers deem necessary for a truly successful count, Turner, as have some other big city Texas mayors, is spending city revenue to raise the visibility of the census.

One compelling narrative that overrides distrust, speakers agreed, is the high stakes for kids if they are undercounted. Approximately 105,000 Texas children were not counted in the last census, said Elizabeth Bille, Texas State Director for NALEO, “and 75,000 of those are Latinos. So you can imagine what is at stake for our community and all communities of color.”

Bille spoke of her concerns, not only as an advocate, but as a mother, knowing and watching young children being deprived of health or educational resources that could be readily available were the census count accurate and communities received the appropriate funding. She also echoed Emgage-USA’s A.J. Durani in advocating for robust cooperation between census advocates and the ethnic media as trusted messengers.

Angelica Razo, State Director for Mia Familia Vota, said everyone already knows why people are fearful but "we need to empower them and tell them why need to fill out the census.” Razo agreed that ethnic media as trusted messengers are vital to educating communities but said there is another imperative needing emphasis. “Put some ownership on community members, they too are trusted messengers.”

Hyunja Norman, director of the Korean Voters Association, brought to the meeting promotional material she had developed and financed in order to reach Korean Americans. She struck an emotional chord with attendees about what is driving her engagement with her community around the census. “I am participating in the census because I am part of this great nation. We are part of this nation. We contribute to this nation. Make your community exist in this country.”

Ebony Fleming, of the children’s service organization BakerRipley, summed up the shared sense of pride of place through the census: “In the space you’re in, you matter.”