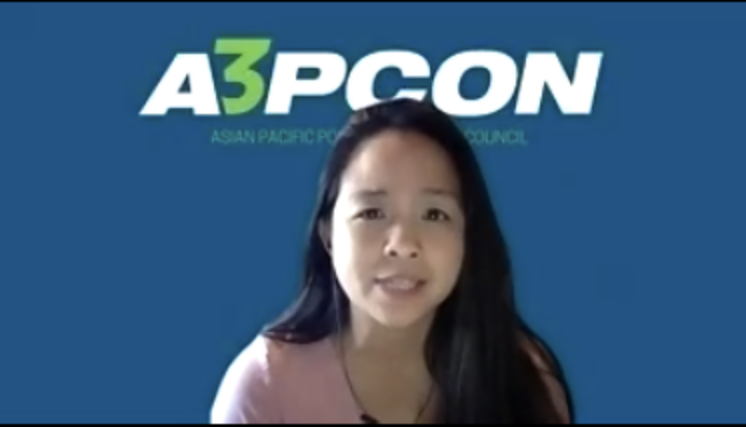 Aquilina Soriano Versoza, from Pilipino Workers Center, spoke in Tagalog about how the COVID-19 pandemic has forced changes in efforts to ensure Asian Americans, Pacific Islanders and Native Hawaiians are fully represented in the data being collected in the 2020 Census. Filling out a census form takes minutes, but its effects will resonate for the next decade, or longer.

With the onset of the COVID-19 pandemic this year, grass-roots efforts to encourage full 2020 Census inclusion have had to make drastic adjustments to their strategies.

On Wednesday, April 14, Congressman Jimmy Gomez, who represents California’s 34th District, joined a host of community Asian American, Pacific Islander and Native Hawaiian representatives, all working from the safe shelter of their homes, in a press teleconference briefing to discuss the challenges the pandemic has presented to getting their communities counted in the 2020 Census.

The conversation, hosted by the Asian Pacific Policy and Planning Council, extended to what new strategies they’ve implemented to meet those challenges and how the pandemic has highlighted the importance of census participation.

“The census benefits all of us,” A3PCON’s Manjusha Kulkarni said in opening the meeting. “We are heavily reliant on doing outreach face-to-face. It’s clear that the pandemic has had a negative effect.”

She then introduced Gomez, whose work in Congress includes a seat on the House Committee on Oversight and Reform. Part of that committee’s purview includes overseeing census operations.

“An accurate census impacts nearly every aspect of our lives,” Gomez said, and cited needs the pandemic has highlighted such as for emergency response, hospitals and sufficient hospital beds.

“We’re feeling the remnants of the last census,” he said. “Do we have enough resources for the people that are here? If we’d had a more accurate count …”

With a response rate in the high-40% range, the nation as a whole is about 10% behind where it was at this point in the process in 2010. California is slightly ahead of the national rate, but the response rate in its primarily Hispanic communities is 10% lower.

Worse, Gomez said, in his own congressional district, which is more than 65% Asian, census participation so far is only at 32%.

“We need to up our game,” he emphasized. “We want to continue to push the self-response rate.”

Usually in the once-every-10-years census, responses are collected through July. Already this year that time has been extended to Aug. 14, and now the plan is to continue that work through October, which risks making the data, intended to provide a snapshot of the country as of April 1 this year, less accurate.

“We must make sure that an extension does not compromise the quality of the data,” Kulkarni said as she introduced Kawen T. Young from the Native Hawaiian and Pacific Islander Alliance.

Young, noting that the current population is “standing on the broad shoulders” of its predecessors, emphasized the importance of census participation “to shape the future for the next 10 years.”

“In terms of COVID-19, we are pretty together, but of course we have to work extra hard.” His organization’s efforts include in-language PSAs (public service announcements), social messaging, and “even TikTok with the younger generations.”

Except for the opportunity to identify a co-habitant as a same-sex spouse, “we are excluded.” For example, there is no way for a person to indicate being transgender, non-binary, intersex or LGBTQ unmarried.

“We know that this is an incomplete picture,” she said. “LGBTQ people exist within all populations,” but nonetheless, “despite these shortcomings, we are still encouraging people to fill out the census the best we can.”

Her organization has turned to producing videos and phone banking including video calls to encourage participation.

Linda Huynh from API Forward Movement said that in her work as a Chinatown nutritionist, as part of the food deliveries she oversees are in-language flyers describing the importance of census participation and information on census hotlines.

API Forward Movement, she said, can no longer hold events in conjunction with the Alhambra Unified School District or faith-based organizations, but has intensified its work through online papers such as Alhambra Source, including producing animations emphasizing how the COVID-19 pandemic highlights the urgency of being counted in the census.

She noted that posts including photos of “people that look like us” or are “in-language” get far more user views, sometimes many times more, than those that don’t.

Amy Hom from Khmer Girls in Action said that in their work emphasizing the importance of the census and how the political landscape impacts lives, Instagram is preferred for reaching the youngest members of the community, Facebook for elders and Twitter for news and media.

Jose Roberto Hernandez, of the Koreatown Immigrant Workers Alliance, described how his organization began the year doing census outreach in person, canvassing block-by-block and reaching 51,000 people by early March. KIWA also coordinated with the South Korean, Mexican, El Salvadoran, Honduran and Guatemalan consulates, who provided space for them to set up tables and “very successfully” do other forms of outreach.

But because of the pandemic, KIWA has had to shift its focus to phone banking and sending text messages, which its volunteers are doing by the thousands — 15,000 and 60,000 respectively, he said.

In the words of Empowering Pacific Islander Communities’ Tavae Samuelu: “Being counted is our tautua, our kuleana, our duty to those who came before us and those who will follow.”