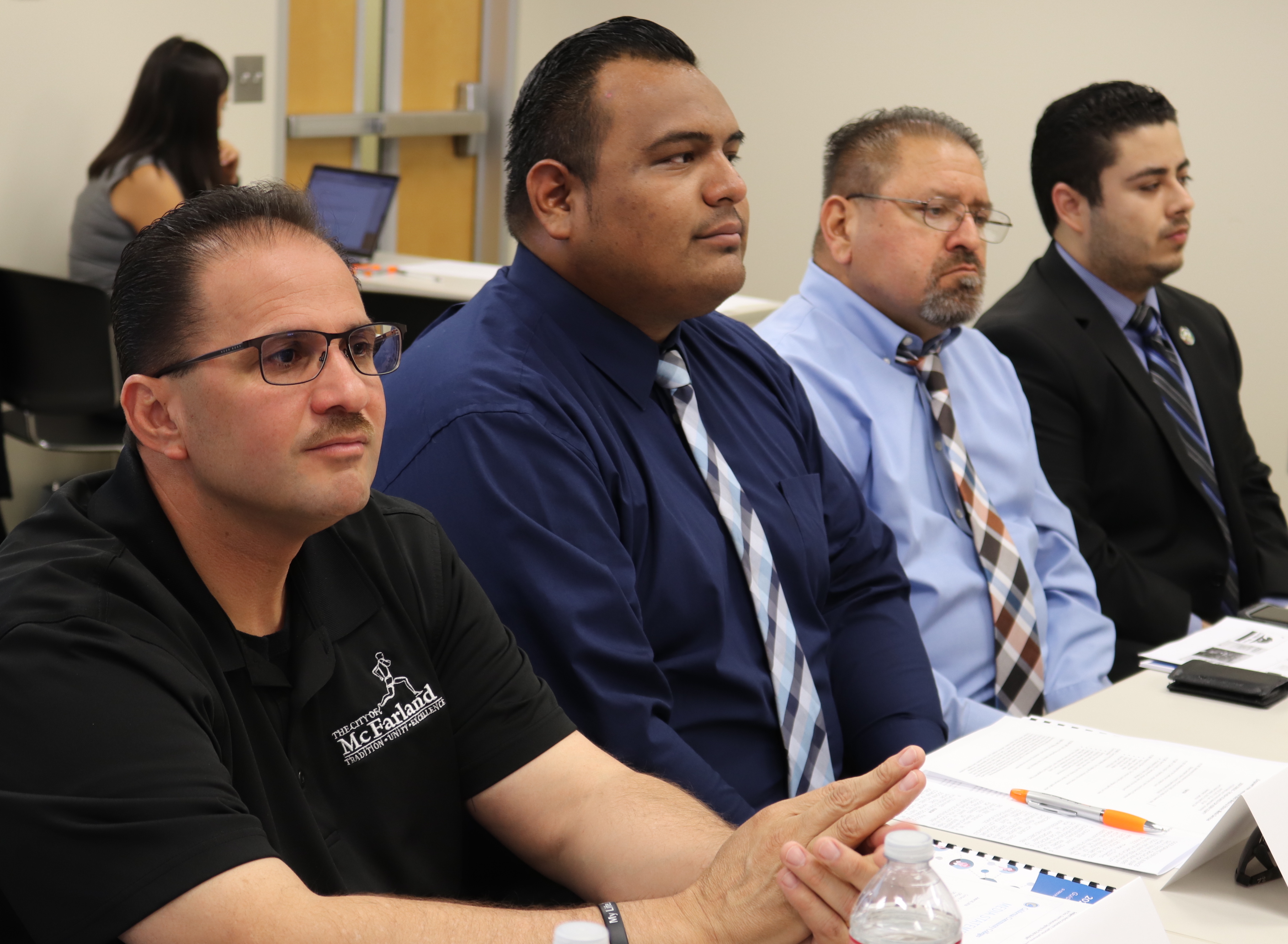 BAKERSFIELD — Next year's census seems distant to many, but not to leaders and community activists in California's largely agricultural Kern County, where population growth and the needs of the community leave no doubt that the future is at stake.

On Friday, June 28, in an unprecedented event, local mayors, officials from various levels of government, community organizations and representatives from communities as diverse as Latino, Native American, Punjabi, African American, Latino, Assyrian, youth, gay and lesbian, religious, residents from rural areas and farm workers came together with a common goal: to be counted in the 2020 census. 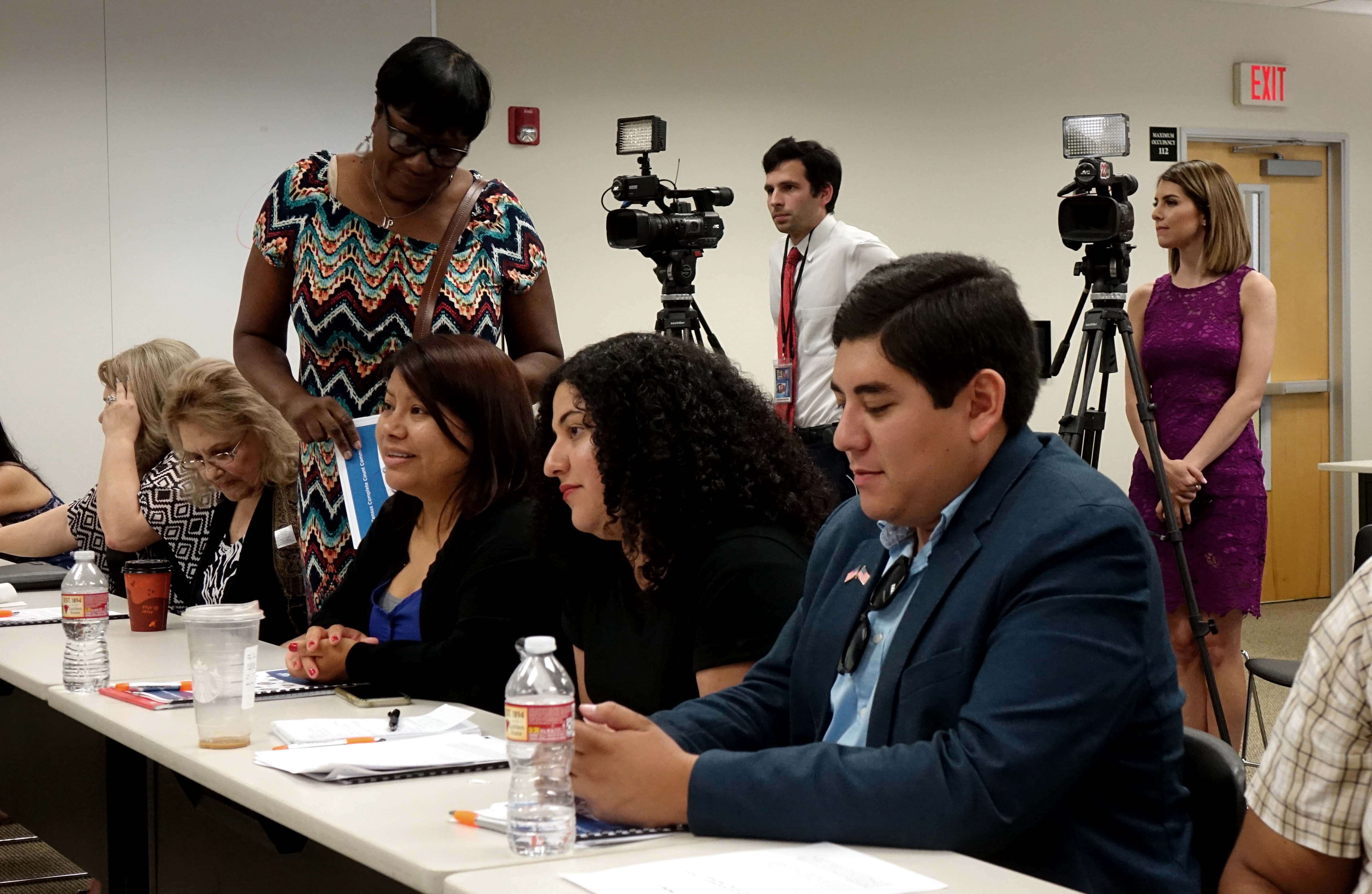 They gathered just a few days after the U.S. Supreme Court had disallowed the addition of the citizenship question to the census questionnaire and before the Trump Administration announced it was dropping it altogether. At the meeting there was a sense of relief, but many in attendance still believe there is work to be done to overcome reluctance or apathy that could lead to undercounts of certain communities.

"I really appreciate the diversity in this room today," said Manuel Cantu, mayor of McFarland, a city 25 miles northwest of Bakersfield. "What we're discussing is a humanitarian issue, not a political one. Our goal is to serve every person, especially children who don't have a voice yet.”

Chairing the meeting: four Latino mayors from cities surrounding Bakersfield, including Delano, Wasco, McFarland and Arvin. The agenda: how to deal with local communities' fear, apathy or distrust of participating in the census and convince them that it is in their best interest to fill out the forms detailing their presence in this country.

Though it's a major challenge, they have no choice but to try. In one of the country's most productive agricultural areas, there are numerous communities vulnerable to being overlooked in the decennial census count, according to U.C. Merced professor Edward Orozco Flores.

"In the 1990 census, the San Joaquin Valley had one of the largest undercounts in the country," Flores said. Among the hard-to-count groups are "complex" families, large families, young mothers with children up to five years old and immigrants, he explained.

For Joseph Aguirre, mayor of the city of Delano, the survival and prosperity of his small agricultural city has a lot to do with an accurate census count.

"We need those federal and state resources," Aguirre said. "In 2010, when I was elected, the unemployment rate here in my city was 44%. Today it's less than 9%, and this didn't happen by chance but because we planned and invested our resources.” 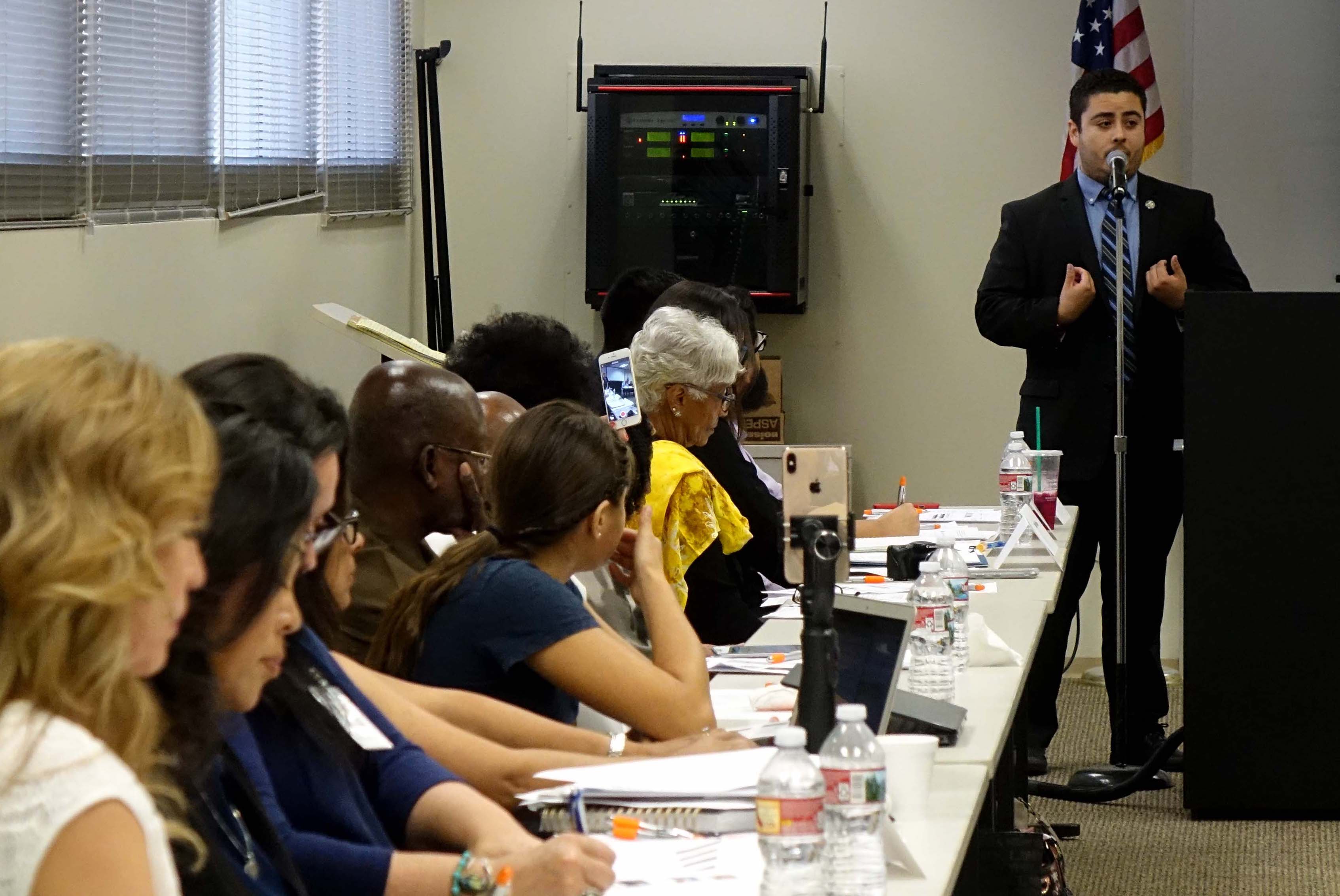 Mayor Jose Gurrola of Arvin speaks to the crowd. Photo by Eduardo Stanley.

Jose Gurrola, the young mayor of Arvin, another small municipality southwest of Bakersfield, noted that when the current generation of Latino public leaders was elected, "we did it to improve our communities and then we found great resource limitations.

"Aside from funds for transportation, air and water quality, schools, health, we also risk losing out on political representation," explained Gurrola, who praised the presence of his colleagues. "I am very pleased to see the mayors of our Latino cities together, because we are going to have to work together to counter the fear that is already out there.”

The 2020 census, which officially starts April 1, is already a matter of controversy because of the Trump administration's efforts to include a citizenship question in the questionnaire. In late June, the Supreme Court disallowed the inclusion of the question, but President Trump insists the issue has not yet been resolved

The citizenship question is not the only issue causing concern. The idea of any encounter with officials of the federal government could inhibit the participation of some.

Fear is crippling, the leaders agreed.

Lupe Martínez, of the Center on Race, Poverty and the Environment, said that community leaders themselves should be mindful not to invoke the "Cucuy,” a mythical character used in Mexico to frighten children into behaving themselves.

"To begin with, we should be careful not to foment fear ourselves," Martínez said. "Fear is used to keep us submissive. What we need is to empower ourselves, promote the positive, and explain to the community why we need to count in the census."

Alex Garcia, mayor of Wasco, indicated that his city, less than 20 miles from Bakersfield, has experienced an increase in population related to the rising cost of living in other California regions. However, his region includes many groups vulnerable to being undercounted by the census.

"I want it to be very clear that the census will have an effect that will last 10 years," Garcia said. "It will affect our state and federal funds, roads, and at least 132 programs for low-income families."

Each community present in the room presents a challenge and an opportunity. But all feel unity of purpose in getting their communities counted by the census in the middle of a challenging political environment. 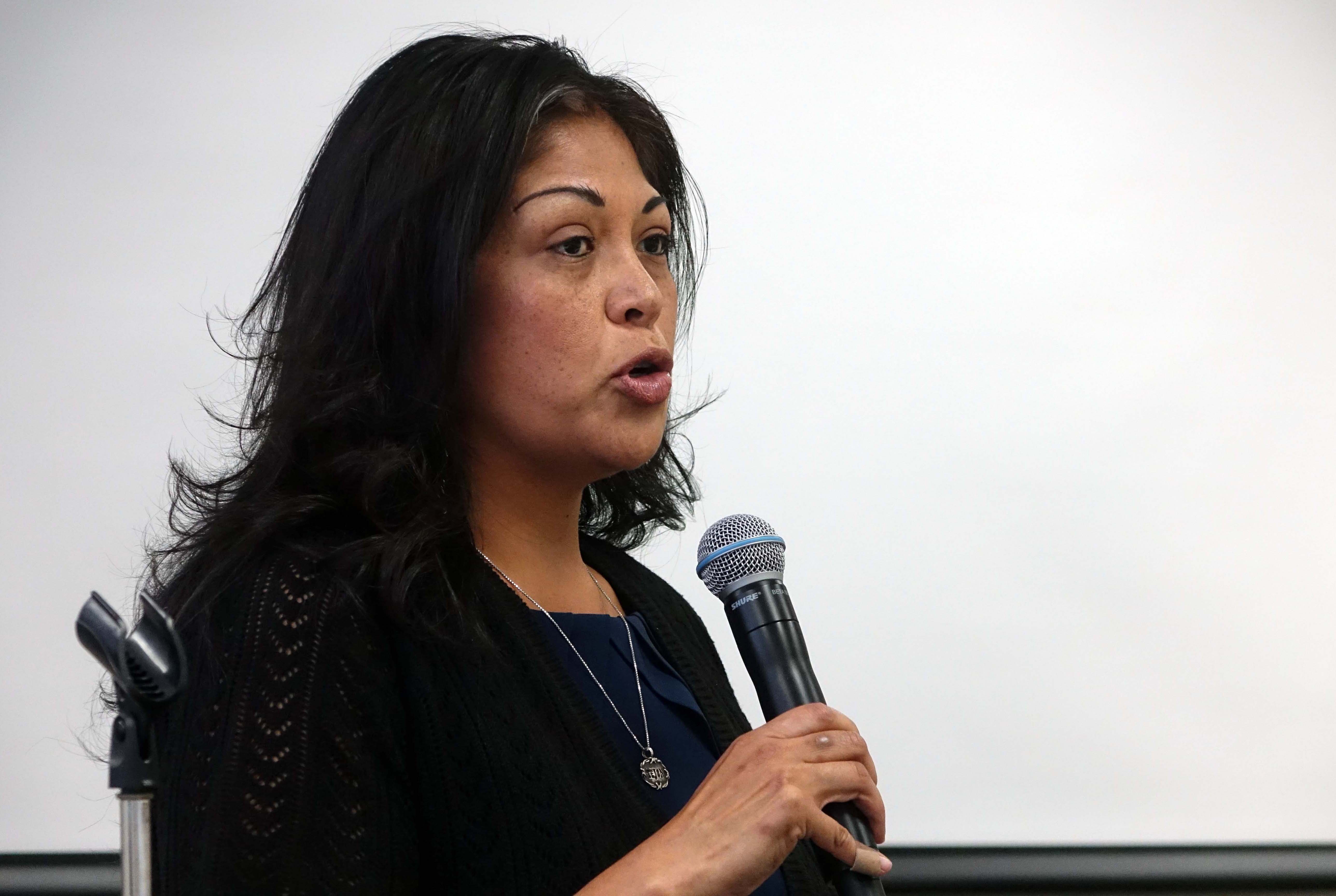 Sandra Hernandez of the Tejon Indian Tribe speaking on how the census can have effects decades after a count. Photo by Eduardo Stanley.

For Native American communities, enumerations have had negative connotations in the past.

"Many times when they did them, it was to eradicate us," said Sandra Hernandez of the Tejon Tribe. "Changing that negative image into a positive one is what is essential in the Native American community.”

Wanda Lord, of the Bakersfield American Indian Health Center, remembered that those in her community who did not participate in censuses conducted almost 100 years ago to create federal tribal lists ended up "without recognition and without land. As an example relevant for today, the allocation of funds for clinics serving indigenous communities is distributed according to population size," she said. 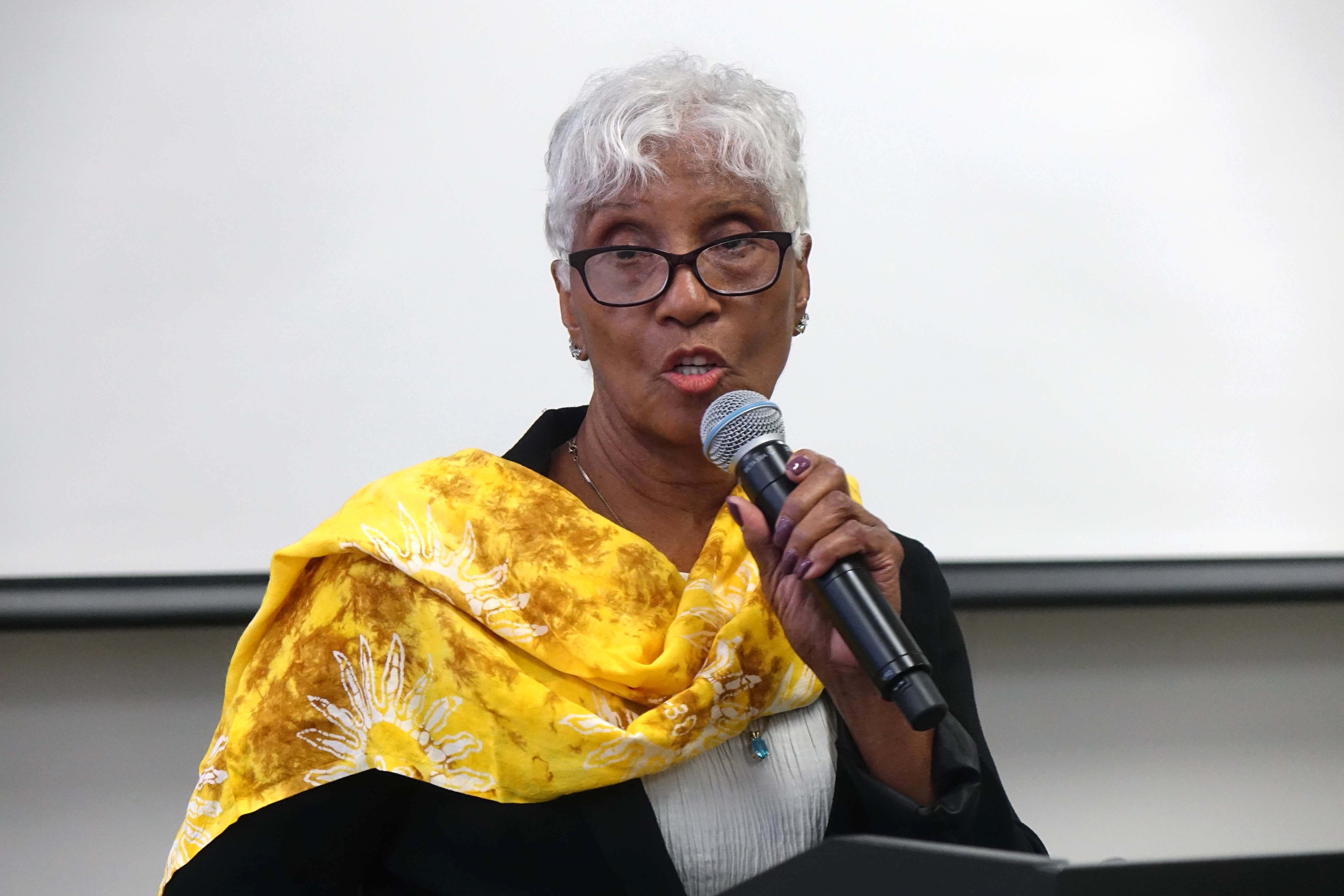 “We have to be mindful that we are inclusive”, she said. “African Americans don't represent every single person of color. Latinos don't either. My message is we all need to learn about all communities and we all need to count for dollars” 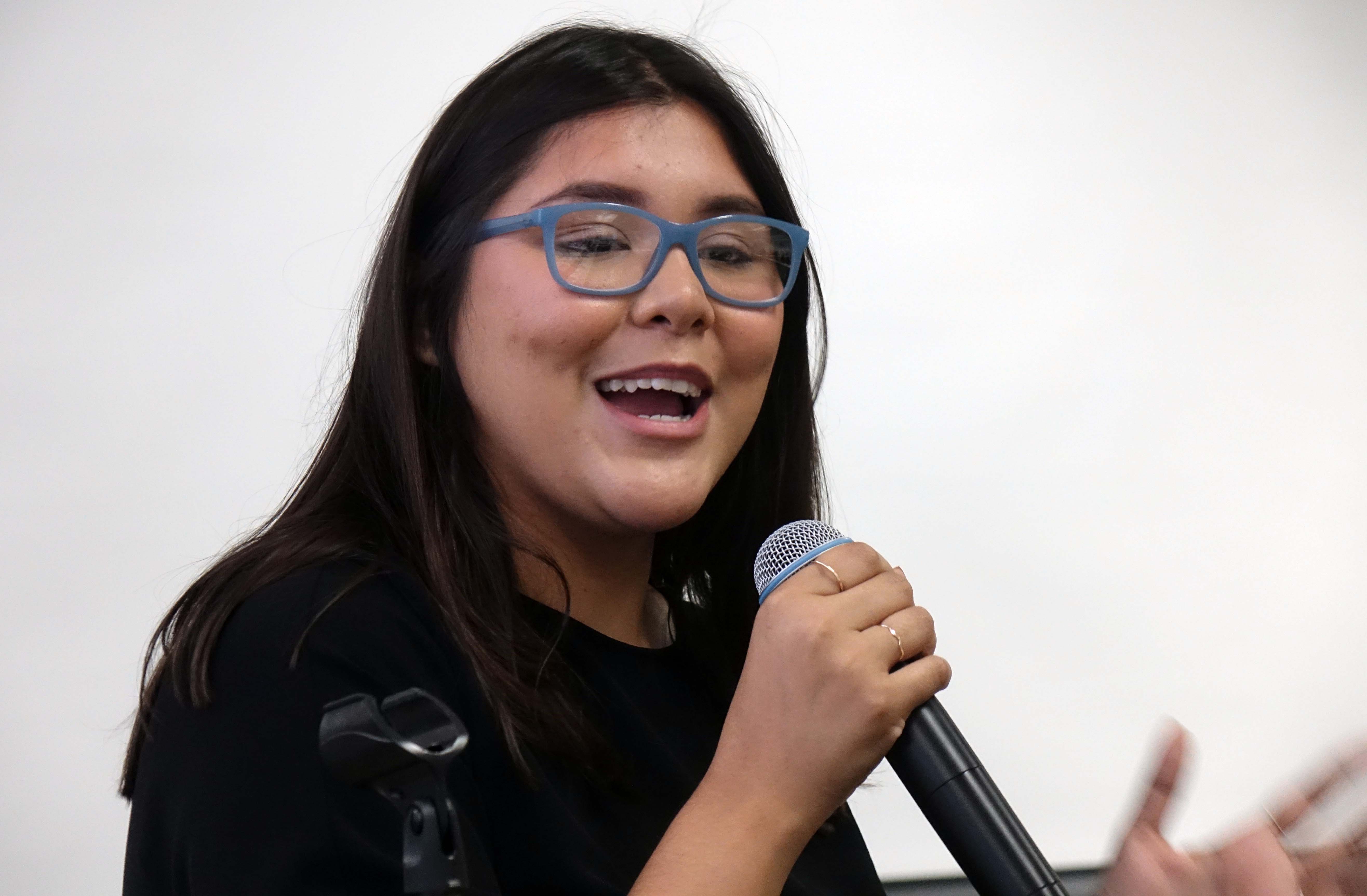 Yvette Flores, a student at Cal-State Bakersfield who directed the 2018 Voter Registration Project, said the census was more important than voting. Photo by Eduardo Stanley.

Yvette Flores, a student at Cal State Bakersfield who runs a voter registration project for young adults, explained that educating students in immigrant communities about the census would be key to informing the adults in charge of filling out census forms.

"I grew up in an immigrant family, and many of us were the translators and civic educators in our family," Flores said. 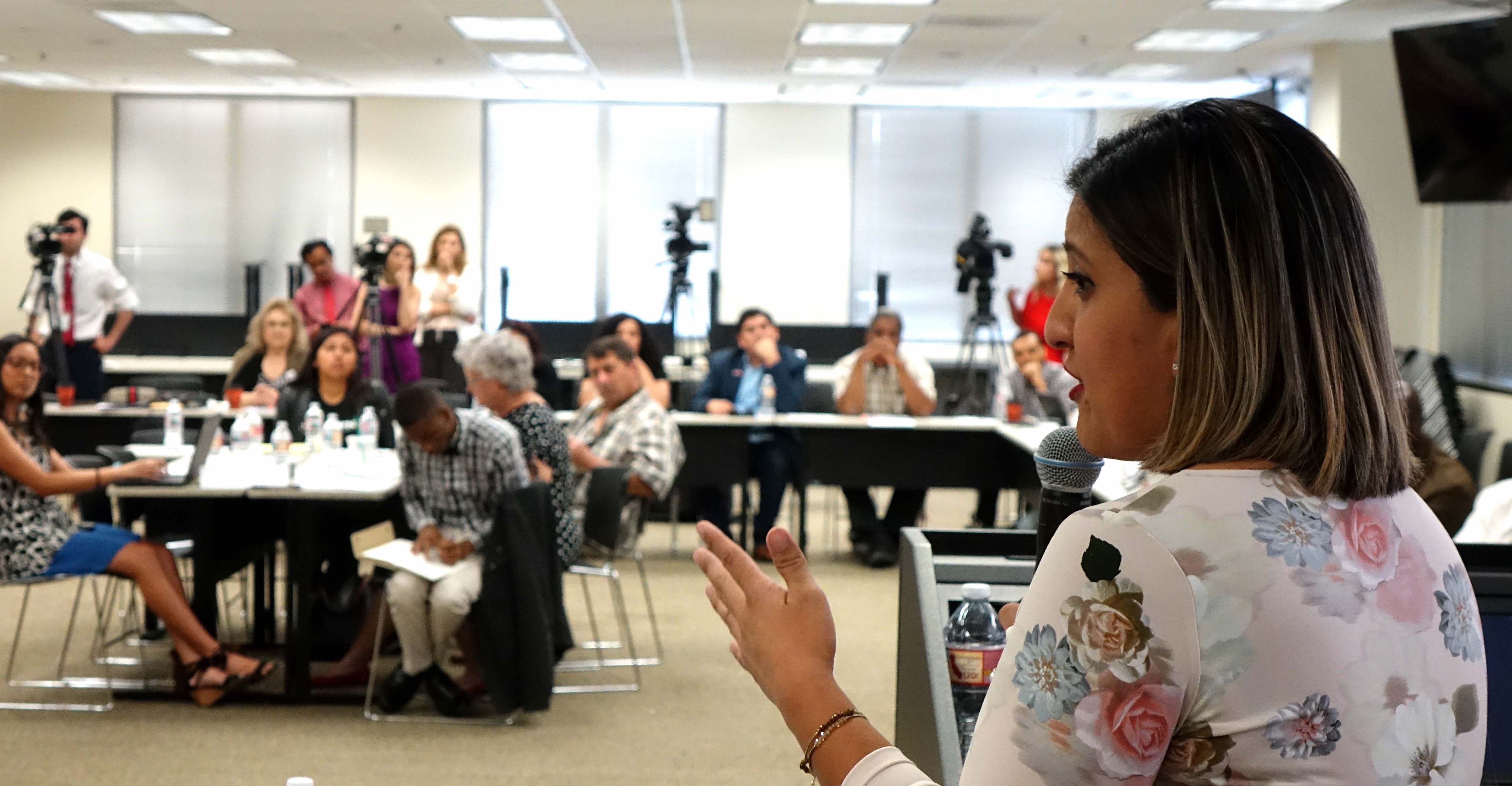 State Senator Melissa Hurtado, from the area's 14th district, attended the meeting to reassure the diverse group of leaders that she will do everything possible to provide the necessary resources to help in the task of "conducting an accurate count of the population and protecting vulnerable communities."

California has its own Census Complete Count office to safeguard the interests of the state and its communities, and Patricia Vasquez Topete, outreach program manager, said her job is to focus on those communities vulnerable to undercounting. "We will do what needs to be done and attack misinformation and count everyone,” she said.