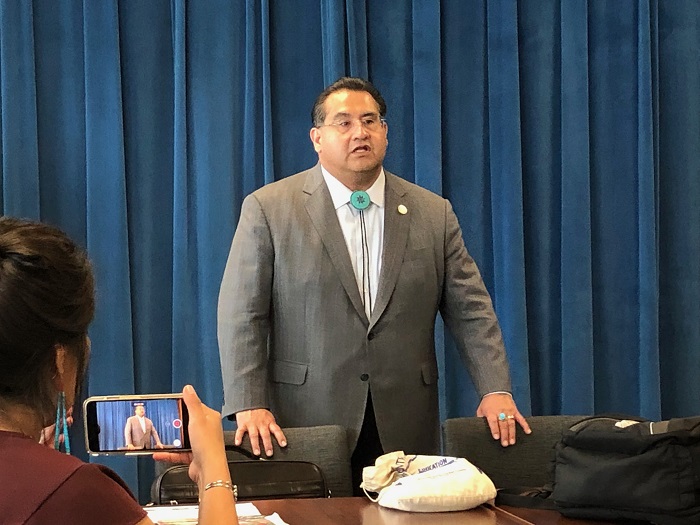 James Ramos (D-San Bernardino), the first Native American elected to the California State Assembly, addressed a gathering of Native American media and state workers ahead of the upcoming 2020 Census at a meeting in the governor’s conference room on April 4 (Photo: Lynn Chan).

SACRAMENTO, Calif. — Fear, distrust and even anger at the federal government are among the obstacles the 2020 Census must overcome to reach an accurate count, especially of immigrants and communities of color, most experts agree.

For Native Americans, the ethnic group with the highest undercount of any defined by the Census Bureau, these obstacles are compounded by diversity and isolation.

So concluded a group of Native American media representatives who met recently in Sacramento with state officials, a Native American legislator and members of the governor’s staff to brainstorm how to reverse the undercount in 2020.

There’s no one-size-fits-all message on the census for Indian Country, Ditas Katague, director of CA Complete Count Census 2020, the state’s complete count committee, acknowledged. She pointed out how in 2010, the Two Rivers Tribune had to reject two consecutive ads as culturally inappropriate ꟷ one showed Plains Indians walking through fields towards teepees, the other depicted an Indian man in front of a Los Angeles skyscraper.

Two Rivers Tribune’s readership of Hoopa Indians have lived in the redwood forests of Northern California for 20,000 years. Native media embedded in their communities are key to customizing the message for each tribe, Katague pointed out.

The stakes couldn’t be higher. The 2010 Census, considered the most accurate of any decennial census taken since 1790, still missed almost 5% of Native Americans living on reservations and almost 12% of those off the rez. As a result, the native community has lost out on at least 4.9% of its share of hundreds of billions in government allocations based on census data.

The undercount has a national effect. George Washington University’s “Counting for Dollars 2020” study estimates that for the 16 large federal programs that together spend $589 billion annually based on census data, the loss comes to $1,838 per person. For California, the same study pegs that amount at $1,958 per person. Mark Trahant, editor of Indian Country Today, says for the Native American population, the number is closer to $3,000 each.

“Indian Country is so diverse in general, but in California ꟷ the state with the largest population of Native Americans in the country ꟷ that diversity increases exponentially,” said Jourdan Bennett-Begaye, a reporter with Indian Country Today. “California has 109 recognized tribes, and there are so many more. Each tribe, each community, is different, with our own identities, our own ways.”

Daniel Golding runs KUAV, the radio station serving the Quechan Indian Tribe in the southeastern corner of the state ꟷ “California’s second-largest tribe you’ve never heard of,” he joked. To underscore the diversity, he recalled seeing a coyote on the road while touring a different reservation. “For one tribe, crossing paths with a coyote brings bad luck. For my tribe, it’s a sign of good fortune.”

The sheer isolation of tribal lands makes tallying people a challenge. Eric Ortega, of the Pala Indian Reservation in San Diego County, notes that just having a street address, instead of a post-office box, is a recent innovation.

In 2010, the Census Bureau began community outreach efforts two or three years before census-taking started. That was very helpful, according to Brian Golding, Daniel Golding’s brother, head of economic development for the Quechan tribe. Local residents helped enumerators find where people lived, he said, and more importantly, worked alongside enumerators to mitigate a mistrust of strangers that might have led to fewer people being counted.

That sort of outreach hasn’t been seen in the run-up to 2020, Golding says. “This go-round, right out the gate, is significantly weaker in outreach to Indian Country.”

The Census Bureau has been underfunded throughout the 2010s, affecting its ability to do its typical preparations such as community outreach and thorough field-testing of proposed changes.

And, in a new cost-cutting effort, the Census Bureau plans to have people complete their questionnaires online after getting a notice in the mail. But not everybody in Indian Country has ready access to a computer.

“The online opportunity may be helpful,” Brian Golding says. “The younger population tends to have smart phones and are generally tech-savvy.” But they also tend to be more mobile and less concerned about responding, he adds. “They’re more likely to use tech, but least likely to respond.”

Fully 73% of Native people in California live in cities and smaller towns, presumably making them relatively accessible. But Lorenda Sanchez, who heads the California Indian Manpower Consortium in Sacramento, says it’s actually harder to count Native people in urban communities because they’re dispersed, not clustered in a homogenous community. This is particularly true in cities too small to have strong, sizable identity groups in their midst but large enough to be diverse.

Sanchez, whose organization includes 104 of the state’s tribes and 68 community-based organizations, has worked on census matters for 41 years. She pegs the undercount for Native Americans in California at between 10% and 25% in urban communities, with the larger cities at the lower end of the range. The 2010 Census counted 723,000 Native Americans in California, almost evenly split between full-blooded and mixed-race. Los Angeles has about 140,000, the Bay Area about 75,000.

The April 4 meeting, held in the governor’s conference room in the state Capitol, provided a call to action for attendees.

“One of my takeaways was that localized media in each of the communities that attended are ready to raise awareness and address concerns in each of their regions,” observed Frank Blanquet of FNX TV, who is producing a segment on the conversation.

“We all understand how the census affects us and our communities,” Bennett-Begaye remarked. “We’re figuring out how to communicate that to our diverse audiences.”

Allie Hostler, editor of the Two Rivers Tribune, says her major challenge is limited resources, a sentiment shared by virtually all attendees.

For Terria Smith of the Torres Martinez Desert Cahuilla Indians, editor of News from Native California, which covers tribal news statewide, trust is the underlying issue Native media must address. “There is no trust right now for the federal government at all, as far as a lot of people go. Then you’re going to have to combat people’s apathy: What is the benefit of doing all of this?”

“I understand people’s distress, but it also affects a lot of our federal programs,” Bennett-Begaye countered. “I’m also thinking about the younger kids. The number one population that’s undercounted are kids 0-5, and Native youth are our largest population in Indian Country.”

“If we can get that message back to our people, and we can share that with them, they just may be better involved,” noted Joe Orozco, longtime station manager of the Hoopa reservation’s radio station KIDE, 50 miles north of Eureka. “So I’m looking forward to doing what I can do to make that happen.

“Let’s give them some more numbers that they can count on, and just keep adding to our story,” he concluded as the convening ended.

“That’s the only thing we have. We need the numbers to tell our story.”