Back to school during a pandemic: How to do it safely? 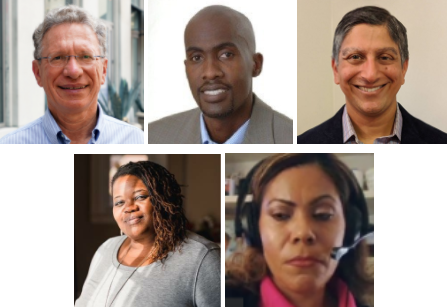 While the CDC has said it is safe for students to go to school even if teachers have not been vaccinated, teacher unions and parents have less confidence in the safety of the school environment.

Since the COVID-19 pandemic forced the closure of her children’s school in Los Angeles and obliged the family to move into distance learning without much knowledge, Karla Franco feels that in addition to being a mother, she has had to learn to be a teacher, a counselor and even an expert in electronic devices.

Overwhelmed by her new tasks and the lack of support for parents who found themselves immersed in a remote education model in response to the virus, Franco has become a fierce community leader in her school district in southern California  where, as in the rest of the country, there is fierce debate over reopening schools safely.

“What I think and hear from other parents in general is that going back to school is not safe,” Franco said at a news briefing hosted by Ethnic Media Services on Feb 5. “The school district never protected our students or our campus, not even before the pandemic. I have asked the superintendent: if you cannot control what you see, how will you control this virus that you cannot see? All of us are in danger ”.

Franco insists that not only school personnel and teachers should be protected, but also parents who, according to her, are seen as “the enemy” for raising complaints and concerns to principals.

The question of how and when to reopen public schools has become “perhaps the most contentious issue in the country,” according to Louis Freedberg Executive Director of EdSource, a leading national news site on education. While the Centers for Disease Control (CDC) says that it is safe for students to go to school even if teachers have not been vaccinated, teacher unions and parents have less confidence in the safety of the school environment and the response capacity of its officials in the event of a virus outbreak.

In Chicago for example, amid threats of a strike, the school district reached a tentative agreement with the Chicago Teachers Union to reopen schools in pre-kinder and kindergarten. The city of San Francisco filed a lawsuit against its own school district in an effort to reopen in-person instruction, and Los Angeles City Councilman Joe Buscaino proposed a resolution to file a similar lawsuit against LAUSD.

In addition to the general exhaustion from the number of hours spent on screens, students of color in major urban districts are losing ground the longer they are out of the classroom. As their communities have experienced the most devastating effects of the virus, they are also the most fragile in their emotional health.

“Socio-emotional support is not available in our schools. It never has been available,” said Bernita Bradley, the midwest delegate for the National Parents Union, speaking from Detroit. “We have districts with one nurse covering about four different schools across the city, and yet the parents are expected to trust the school and just send their kids back into the buildings.”

In cities like Detroit, the disparities in education are glaring: here only 16% of students in third grade have the required reading level and 38% of households do not have an internet connection. In affluent districts, technology and teachers prepared to use it made a huge difference in the online learning impact for parents and students. But African-American families, who have historically distrusted the educational system, were left behind.

“Just in June some of our students got laptops or tablets… Suddenly second graders had to turn in assignments in 30 days to receive a grade. And they have no instructor,” said Bradley, who believes it is time to reimagine education because online teaching is “not working”.

“When some schools opened up in the summertime, we had kids who came up positive (for the coronavirus test). Where are the checks and balances to make sure people are really socially distancing? … The plan is that we all get vaccinated but our survey showed that only 55% of parents say they will.”

Safety is the priority

Safety against the contagion of COVID-19 has become the first factor to be discussed in the reopening plans, above the education model itself, according to Dr. Tyrone Howard, professor of education at the University of California at Los Angeles (UCLA) and director of the Black Male Institute.

“That is a larger conversation that will continue to play out and I think it shouldn’t be a one-size-fits-all approach. There will be inequities because certain districts have more resources to ensure a smoother reopening… So we need to make sure that there is a more customized way to ensure that high-need schools have essential resources by way of vaccination, or testing, or PPE (personal protective equipment). ”

Howard highlighted the impact of the pandemic on communities of color, citing a UCLA Center for Health Policy Research report that found that nearly half of California teens reported having some type of mental health challenges in the last year and a third of those young people said that the levels of depression they felt due to isolation were so high they were unable to do their homework.

Additionally, according to Los Angeles County public health officials, the average number of Latinos dying from coronavirus each day has increased by more than 1,000% since November.

“The fact that children have lost loved ones, mothers, fathers, grandparents, caregivers, aunts and uncles is serious and significant,” Howard said. “Many schools do not have the bandwidth to invest in social workers, counselors or therapists and as we do reopen kids are grieving, suffering from anxiety and depression and the schools will not have the support in place to assist them.

“This has a particular effect on black, brown and indigenous children whose behavior can change dramatically by these traumatic experiences, which are punished with suspensions and expulsions. “

Howard considers that in addition to the social-emotional well-being of the students, two other core areas must be taken into account in the reopening plans: learning loss problems and the support for teachers.

“The learning pods that popped up mainly in affluent white communities, where in-person learning was still taking place, were not opportunities for many black and brown children… We are going to have to make a big push for individualized tutoring, especially for students who are language learners, those with special needs, and those who are experiencing homelessness.

“Those were already students on the academic fringes and this pandemic has pushed them even further (from those fringes). So the grading issue is a real problem. “

As for teachers, Howard argued that they should be part of the conversation because many of them do not feel safe returning to in-person instruction and even for some students who suffer from high levels of anxiety or bullying at school, the online format is a good alternative.

This has been a topic of special interest to the Asian American student community. The racist rhetoric about the origin of the virus promoted by the previous administration has led to “the rise of harassment and bullying,” said Akhil Vora, executive director of the Asian American Lead (AALead) organization.

“These (incidents) include verbal attacks, refusal of service (of teaching) and physical assaults, which puts the well-being of our API children at increased risk… They heard negative things before schools closed down and now that we’re all virtual, they’ve seen anti-asian rhetoric on social media sites that they frequently visit.”

For Vora, the fact that one in three APIs have limited English proficiency requires schools to do “an effective job of communicating with parents who speak another language.”

“Out of the 1.9 trillion (from the stimulus package) a lot more money should go to schools and counselors. Whatever needs to be done to ensure that marginalized students are being supported right first and foremost,” Bora said.

Despite fears across the board, epidemiological evidence suggests that children are the population with the lowest risk of contracting COVID-19 and with a stronger immune system to survive it. Several studies indicate that transmission of the virus among students, especially in elementary school, is very low.

While that may not be very comforting to parents of children in middle and high school, the main problem is that “there are adults and teachers in schools who do not have the same protections (as children),” said Louis Freedberg of EdSource.

This depends on the spread of the virus in the local community and the way schools can mitigate that spread beyond the well-known measures of wearing masks and social distancing, which require working with smaller groups of students.

“Having good ventilation systems, screening and frequent testing. A lot of school districts do not have those measures in place,” Freedberg said.

But back-to-classroom advocates also argue that schools are where kids get their meals, a task that several districts continued doing during the pandemic. “The impact of food insecurity on academic performance is something that we are starting to learn about,” Freedberg said.

“We have to look more closely at the research and see how it applies to our communities. There needs to be some focus on making sure that research is available in other languages,” he concluded.