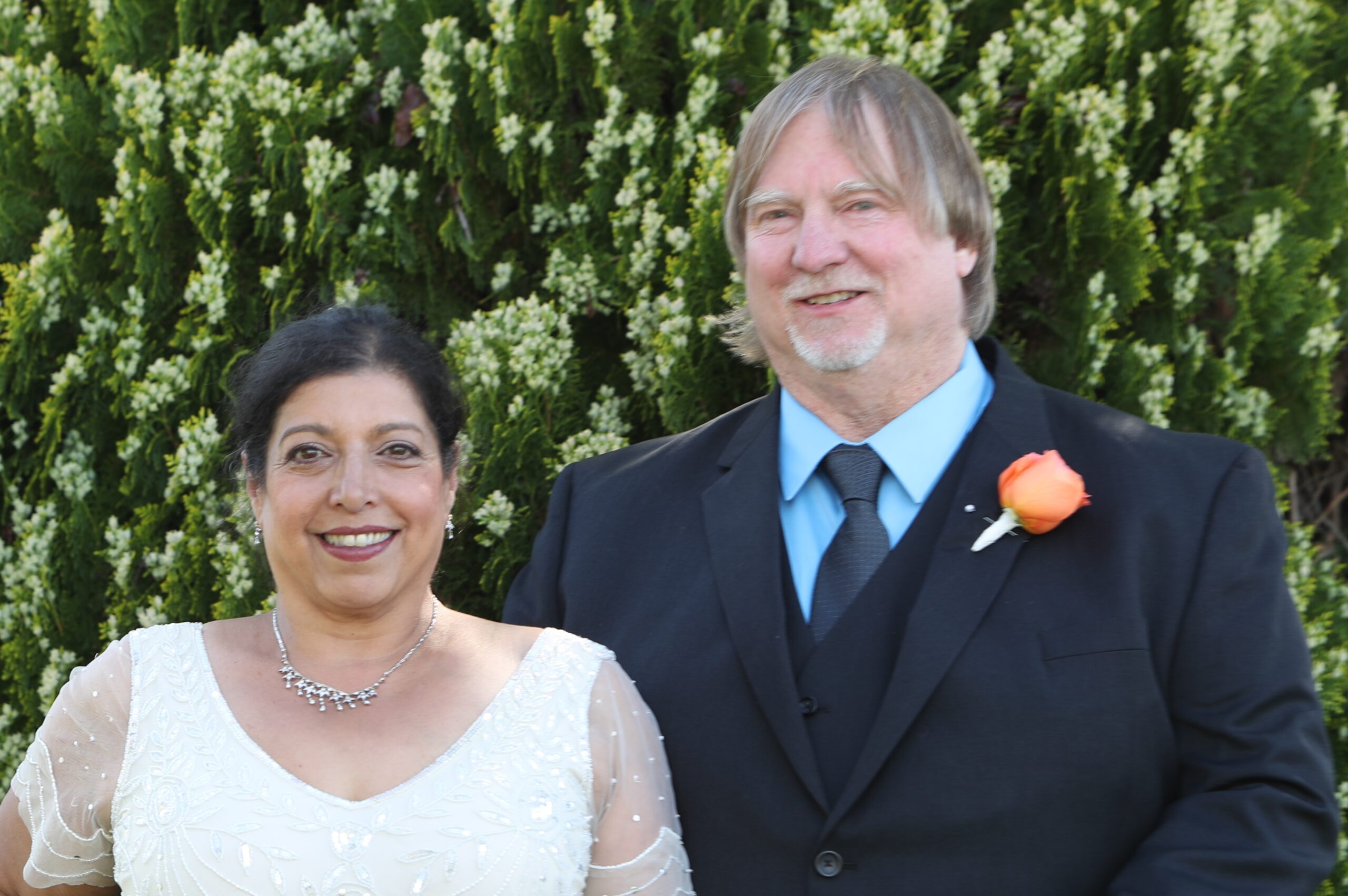 Shireen Carlson and her husband Leif

Editor’s Note: Indian American Shireen Carlson, and her husband Leif, were both recently stricken with COVID. The couple is shown here on their wedding day April 28, 2018. (Som Sharma photo/courtesy of Leif and Shireen Carlson). This is one of a series of portraits by ethnic media reporters of COVID survivors who reconnected to faith or drew on prayers long since forgotten. Sunita Sohrabji is a staff reporter for India West and a contributing editor of Ethnic Media Services.

As a child growing up in Burlingame, California, Shireen Carlson and her two sisters would recite their prayers, punctually at the dot of 5 p.m. each evening.

Carlson, whose maiden name is Sohrabji, immigrated to the U.S. from Mumbai, India with her family in 1970, when she was just three years old. At the time, there were few people of her Zoroastrian faith in the U.S. — Carlson, at the age of six, was one of the first children to have a navjote in America, a ceremony that initiated her into Zoroastrianism, one of the world’s oldest religions which originated in Persia (now Iran). Her mother spent hours each evening teaching her daughter to pray in the Avestan language of their religion.

Zoroastrians from India are also known as Parsis.

Reaching adulthood, Carlson said, she lost her close attachment to her Zoroastrian religion and stopped praying. “I do consider myself a person of faith, not in an organized religion sense, but I do believe there is a God,” she said.

Three years ago, Carlson married her husband Leif, in a non-denominational ceremony under an ancient oak tree, on their picturesque farm in Petaluma, California.

Just after Christmas last year, Leif, a front-line worker, started to experience muscle aches and chills, coupled with a high fever that reached 102 degrees Fahrenheit. He took a COVID test Dec. 29 and got a positive result on New Year’s Eve. Shireen took her test on New Year’s Eve and also tested positive, experiencing many of the symptoms of her husband, minus the fever.

The Carlsons struggled with their illnesses for several days. But nine days later, when Leif was still sick, he set up a video call with his physician who remanded him immediately to the ER.

“ I was praying for sure,” Shireen Carlson, a social services worker with Sonoma County, said. “I brought him to the hospital. When Leif got out of the car, I had no idea what was going to happen.”

“That was the hardest moment because I didn’t know if I was going to see him again. I didn’t know what was going to happen. And so then you’re totally on relying on faith at that point, the idea that nothing but faith could bring him back,” she said.

“I was definitely asking God for a few favors so that Leif could come home,” said Carlson, noting that she prayed in English — “in a language I could understand” — rather than the Avestan language of her childhood prayers.

Later that afternoon and at many points during her husband’s four-day stay in the hospital to treat COVID-related pneumonia, she recited the prayers of her childhood.

“I don’t know if it made a difference or not to Leif’s health. But of course, it was just my instinctive reaction,” she said initially, later adding: “But I think it worked.”

Leif says he didn’t remember praying, but was extremely worried for his wife, who was also sick with COVID and alone on the farm, unable to get help because of social distancing protocols.

Both the Carlsons have healed and are back to work, after almost a month of illness. Shireen Carlson said she did not know how they were infected.

“We have been following the guidelines, staying home and doing everything we were supposed to and still it happened. It’s really frustrating that after months and months of not seeing family, and missing the holidays, we got it anyway. And that was really sad.”

The Carlsons said they plan to get vaccinated as soon as they are eligible.