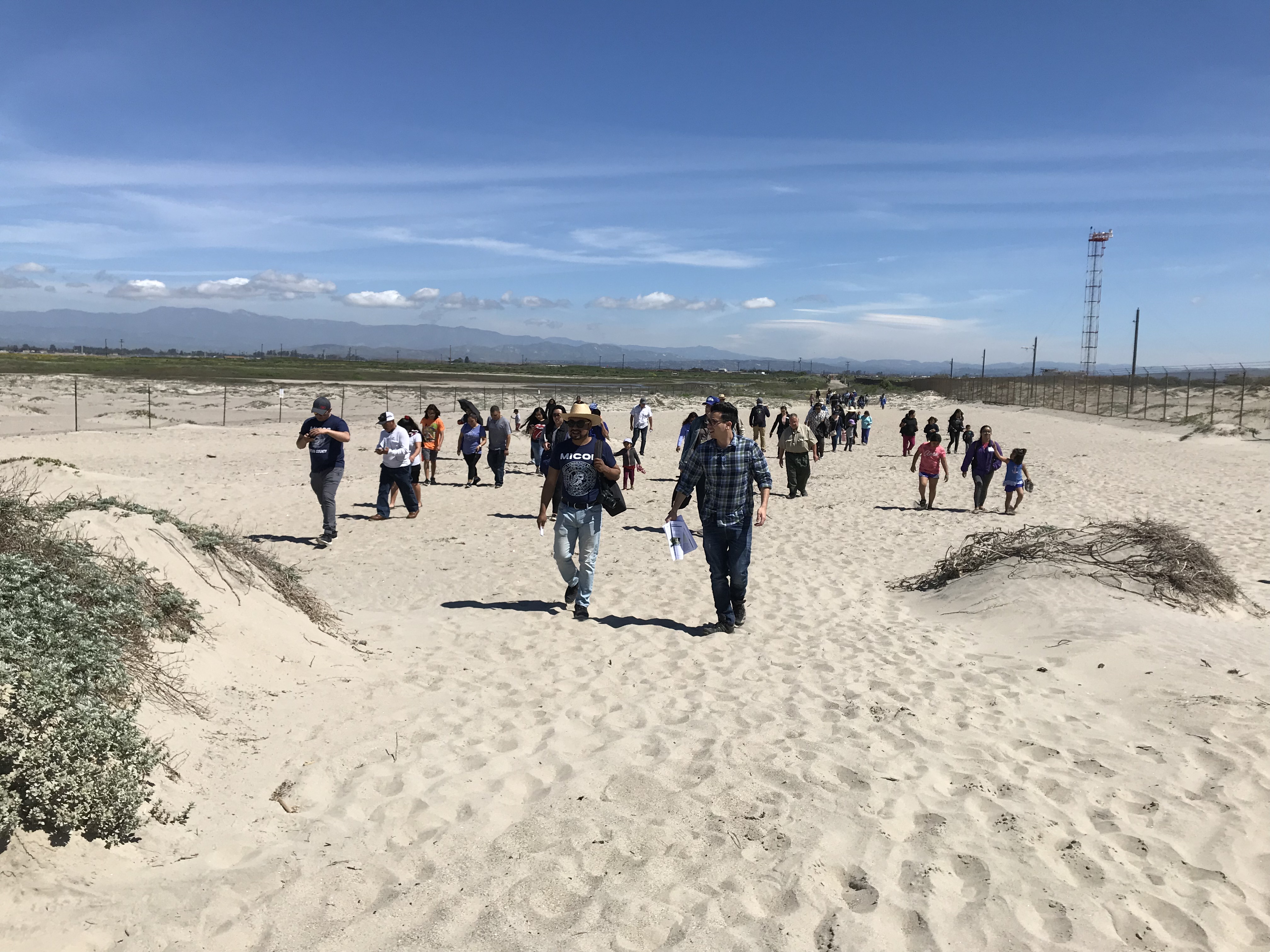 Arcenio Lopez (front, right) of the Mixtec Indigenous Community Organization Project and Lucas Zucker (front, left) of the Central Coast Alliance United for a Sustainable Economy lead Mixtec families to Ormond Beach on a tour of the area, where activists are working to reclaim and restore the shoreline. (Photo: Mark Hedin)

OXNARD, Ventura County – Obsolete power plants, a paper mill and a busy trucking route serving nearby ports have long separated Oxnard’s Ormond Beach from the people who live nearby.

On a beautiful Saturday morning, a busload of Mixtec families visited Ormond Beach, many for the first time. Immigrants from southern Mexico, who speak Mixteco, were joined by representatives from environmental organizations and Oxnard City Council members working to restore the shoreline.

Chris Kroll, project manager for the state Coastal Conservancy agency, said the April 6 tour was part of the agency’s “current effort to develop a final restoration and public access plan” for the 630 acres of coastline it oversees with the Nature Conservancy and city of Oxnard.

“The purpose was to reach out to the Mixtec community in the immediately adjacent community of South Oxnard and get their input,” he said.

Cynthia Hartley, of the Ventura County Audubon Society, recalled when the beach was a popular spot for off-road vehicles, the sand dunes and tall grasses were blown away, and with them, the nesting sites for migratory birds and other wildlife that had visited the region for centuries.

But off-road vehicles have been banned from the beach since 2003, she said, crediting the Coastal Conservancy and pointing out where the dunes and wildlife have started making a comeback.

Hartley and the beach’s unofficial steward Walter Fuller welcomed passengers from the 40-foot school bus chartered by the Coastal Conservancy, which had dropped everybody off after winding past the acres of fenced-off fields of strawberries, cauliflower and turf grass under cultivation where some of the passengers work.

“It’s a critical place for special wildlife,” Hartley said, describing the California least terns, birds that winter in Brazil and fly 8,000 miles annually. The terns and snowy plovers, both endangered species, have visited the Ventura County shoreline for thousands of years.

With the formalities behind them, the group walked the last couple of hundred yards to the Pacific. The kids immediately began exploring and playing amid the driftwood, seaweed, shells and other typical beach detritus, or dipping their toes in the water as the waves ebbed and flowed and their parents looked on. Not far off, two red and white smokestacks jutted skyward above a now-shuttered power plant.

Next on the tour was a quick look at the north end of the beach, where
the most distinguishing feature was the stink of the still-operating paper plant a block or two’s distance from the road’s end.

Lucas Zucker, of the Central Coast Alliance United for a Sustainable Economy (CAUSE), spoke briefly about the competing interests in the community, such as the trucking industry’s hopes to use some undeveloped land for parking, where other people envision a park.

The brief stop was followed by a lunch at the Southwinds Community Center where local elected officials and environmentalists discussed the shoreline and their hopes for its future.

Oxnard Mayor Pro-Tem Carmen Ramirez described how, growing up in Los Angeles, “it was my everyday dream to go to the beach 20 minutes away. I think we went twice.” As an elected official she is hoping kids in her community will have more opportunities than she did to enjoy the natural beauty of the region.

“Our parents should have the right to walk with their children in an environment that is healthy,” said Arcenio Lopez, executive director of the Mixtec Indigenous Community Organization Project (MICOP), who came up with the idea for the tour. He called it “an opportunity for us to introduce our families to these two places – one known, but very contaminated, the other we didn’t know.”

“What’s surprising,” he said, is that the city of Oxnard is looking to restore the beach and have the community’s input on what they would like to see for the beach. For MICOP, it’s an opportunity to bridge the gaps, including language barriers, between the community, the city, the state Coastal Commission and other environmental agencies.

MICOP has developed strong communication with the city council on other projects and initiatives such as its “Safe City” initiative.

“We’re looking forward to doing that on Ormond Beach,” he said.

None of Ormond Beach is at risk of being mistaken any time soon for the protected beauty of wealthier communities such as Malibu to the south or Santa Barbara to the north, as Maricela Morales of CAUSE said at the community center.

“We are about environmental justice,” she said. “Ninety-eight percent of our environment across the state is less polluted than this area, so we’ve got a lot of work to do.”

The only difference between the local community and those of the cleaner beaches up and down the coast, she said, is that “they’re poor and they’re brown. We’re here today because of the families. This wall of pollution makes it virtually inaccessible to these kids. For many it was their first time.”

While the remaining power plants are slated for shutdown next year, Morales said, “right now we don’t have a path forward.”

The power plants are being decommissioned as part of the statewide phasing out of their cooling systems that rely on drawing water – and unlucky creatures – from the sea. But in the short term, the expectation is that the most likely next users of the site of the decommissioned plants will be the homeless.

Kroll said the Coastal Conservancy is hoping to have a draft plan ready within a few weeks and to present it at public meetings in June or July.

Mark Hedin is a reporter for Ethnic Media Services. He previously wrote for the San Francisco Examiner, the San Francisco Chronicle, the East Bay Times, Central City Extra, and SF State’s Golden Gater, as well as other papers.