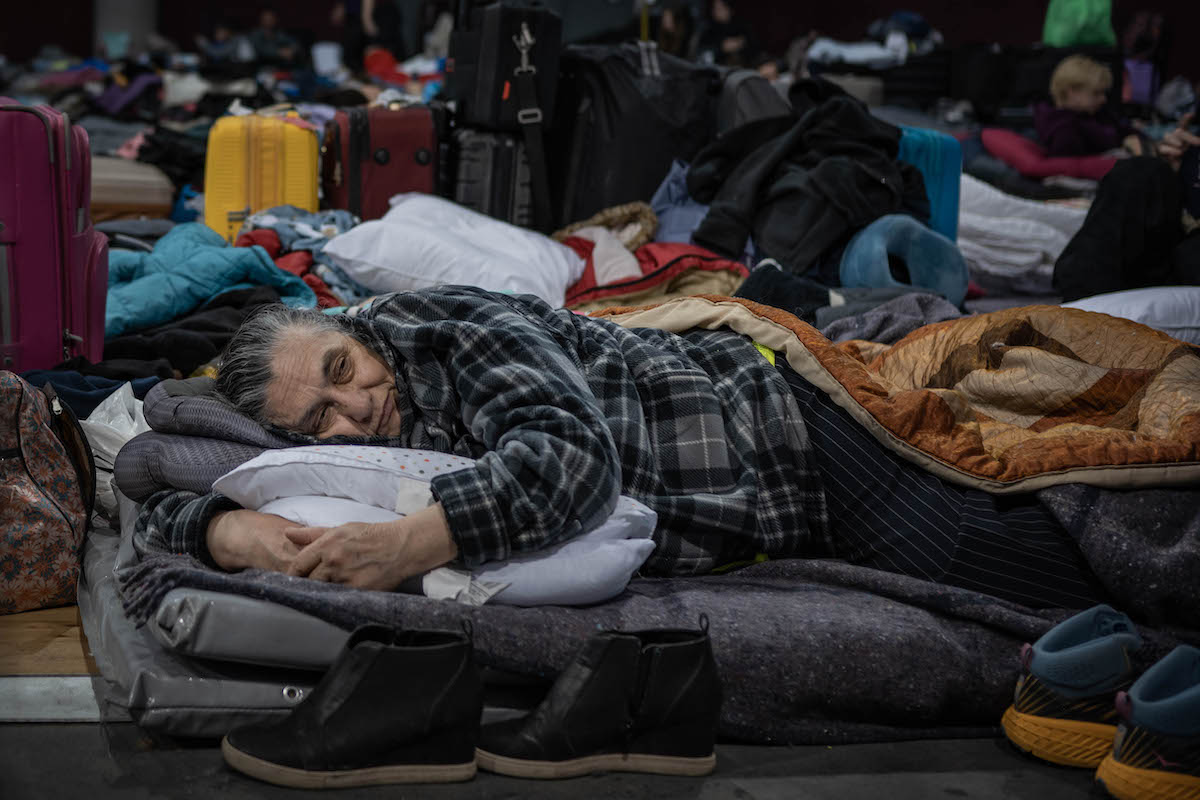 The growing wave of refugees fleeing Russian’s invasion of Ukraine — now in its sixth week — is being felt as far away as Tijuana, Mexico, where more than two thousand Ukrainians are now sheltering as they wait to cross into the U.S.

According to Enrique Lucero Vázquez, who heads Tijuana’s migrant outreach office, the number of Ukrainians arriving to the U.S.-Mexico border shot up dramatically in mid-March, after U.S. Secretary of Homeland Security, Alejandro Mayorkas, announced that Ukrainians fleeing the war would be eligible for Temporary Protected Status (TPS) for up to 18 months.

Just days later the White House announced the U.S. would be accepting 100,000 refugees from Ukraine.

Individuals granted TPS, available to citizens of countries designated as unsafe to live due to ongoing conflicts, unrest, or natural disasters, are allowed to reside, travel and work in the country for the designated period. An estimated 30,000 Ukrainians already in the U.S. on temporary visas will be covered under the new policy.

Ukrainian refugees interviewed for this story say they decided to come to the U.S. because they already have family living in the country. Indeed, many of the volunteers working in the shelter in Tijuana identified themselves as members of the Ukrainian American community, noting they traveled to Tijuana to support their compatriots.

According to Lucero, the Ukrainian refugees — mostly women, children, and senior citizens — enter Mexico as tourists on flights to Cancun and Mexico City from European countries such as Germany and Italy. Russians seeking asylum in the U.S. are also arriving in Tijuana, says Lucero, but on a smaller scale and they are staying in hotels, not in shelters.

Ukrainians seeking to fly directly into the U.S. from Europe are required to show valid documentation – such as entry permits or visas — prior to boarding their flights, while Ukrainians are granted automatic tourist visas for entry into Mexico, making entry into the U.S. more accessible.

Once in Tijuana, it takes Ukrainian families an average of 35 hours from the time of their arrival to cross into the U.S., which has said it will take in around 400 Ukrainians per day at the border. Some 3,000 Ukrainians crossed into the U.S. from Tijuana just last week, according to officials from U.S. Homeland Security.

Immigrant rights advocates have hailed the response to the plight of Ukrainian refugees while also noting stark differences in how migrants from Latin America and the Caribbean are often treated. As an example, many point to the large numbers of migrants sleeping under bridges as they seek asylum in the U.S. just minutes from the new shelter housing Ukrainians.

There has also been reporting that U.S. border officials were instructed to exempt Ukrainians migrants from restrictions under Title 42, a Trump-era policy initially designed to slow the spread of Covid that was used to justify the expulsion of more than 2 million migrants already in the country. Mayorkas denied the allegation and said no such double standard was in place.

The Biden White House recently announced that it would be ending the Title 42 program in May.

The United Nations High Commissioner for Refugees (UNHCR) has warned that the exodus of Ukrainians marks “the fastest growing refugee crisis in Europe since World War II.”

An estimated 4.5 million Ukrainians have fled the country since Russia invaded on February 22, most of them settling in neighboring countries in Europe, while an estimated 6.5 million have been displaced within Ukraine.

Protect Your Child: Covid-19 Vaccines Help Prevent One of the Leading Causes of Child Death