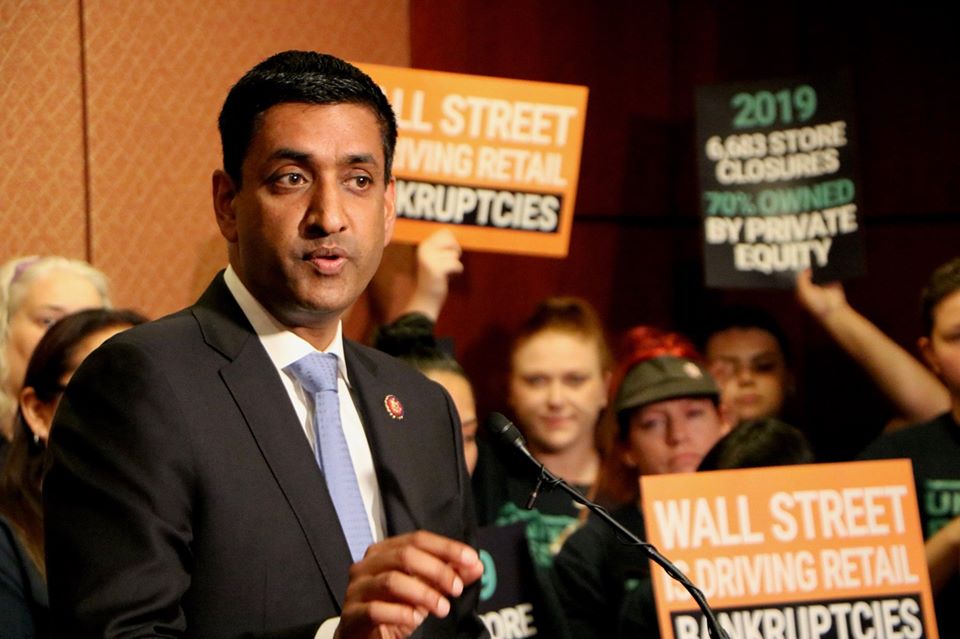 California Congressman Ro Khanna, D-Fremont, attended a rally for worker rights in the U.S. Capitol building in July. Khanna, in a teleconference with ethnic media journalists on Tuesday, Nov. 12, said he supports efforts to reclassify “gig economy” workers, protect DACA and encourage social media platforms to step up efforts to ensure the reliability of news and advertising presented on their sites.

Speaking with the ethnic press this week, Congressman Ro Khanna called for Silicon Valley social media entrepreneurs to increase their vigilance against the spread of misinformation — “fake news” — and discussed issues in health care, housing, immigration and data privacy as well.

Khanna, D-Fremont, represents California’s 17th District, in the heart of the Silicon Valley high-tech hub. He spoke and took questions in a brief call on Tuesday, Nov. 17, moderated by Vandana Kumar of India Currents, co-organizer of the event with Ethnic Media Services.

Addressing the presence of “fake news” in social media, he urged that social media platforms develop systems to remove blatantly false news, perhaps in the same way that copyright violations are dealt with.

“Social media companies,” he said, “need to do a better job of policing themselves, show their sense of responsibility.” Khanna acknowledged that social media is not alone, that broadcasters and public figures also have compromised public trust.

His main concern, he said, is that social media makes it so easy for any news, whether truthful or not, to go viral in no time. So it’s essential that we figure out how to safeguard its accuracy.

He suggested that an independent, de-politicized agency could lay out the standards for what counts as blatantly false news while still preserving First Amendment rights of free speech.

“If they can remove copyright violations, then why can’t they erase speech that is patently false?

“Even if we don’t succeed in passing legislation,” he said, “I am trying to get these tech companies to do the right thing. … Blatant falsity,disregard for truth, has never been allowed. It doesn’t rise to the level of First Amendment protection.”

Khanna said he is working with fellow California Congressman Kevin McCarthy, R-Bakersfield, on a bipartisan bill to ensure that social media platforms filter out the interference of agents propagating false information.

Asked about Facebook CEO Mark Zuckerberg’s seeming lack of concern about the accuracy of information on his website during a recent appearance before Congress, Khanna reiterated his support for greater regulation of false speech and ads, along with the host companies themselves taking more initiative, perhaps in collaboration with one another to “monitor bad actors and remove them.”

As for data privacy issues, Khanna voiced support for an Internet Bill of rights to protect the consumers’ data by making sure consumers know how their data was being used online and have the opportunity to allow it or not. The cost of making it a little bit harder for digital platforms to collect massive amounts of data, he said, is worthwhile if it protects the privacy of people in a democracy.

“No one is saying we ought to curtail social media. We need to have the regulations catch up with the pace of technical change.”

Regarding health care concerns, Khanna spoke in favor of staying the course with the Affordable Care Act (“Obamacare”) for basic care and letting states take federal funding for health care and put it toward a single-payer system.

Khanna repeatedly expressed support for a “Medicare for All” system that would free workers from relying on their employer for health care and also lower companies’ health insurance costs. Taxing them to fund the program would cost less than what they now pay for insurance, he said.

He touched on the need for more federal investment in affordable housing tax credits to boost construction and advocated also for adding more temporary shelters — with services attached — to help people out of homelessness.

“Housing is one of the biggest challenges,” he said in response to a reporter’s question. He lauded investments by Apple and Google in housing construction, expressed support for “intervention programs” that help people struggling to meet their rent and mortgage obligations and, in a general sense, also endorsed “housing first” policy approaches to tackling homelessness.

The congressman was queried about the Trump administration’s efforts to end the DACA program, which were under review in the Supreme Court in Washington, D.C., even as he spoke.

“I completely oppose any effort to terminate the DACA program,” he said. “Congress should act to put it on firmer footing.”

He also expressed support for California’s Assembly Bill 5 effort to redefine the employment terms of “gig economy” workers, such as those who drive for Lyft and Uber into alignment with the standards of traditional employees.

“People should be treated as employees if they’re driving an Uber or Lyft … getting benefits and having rights as employees,” Khanna said.

He made no mention of exceptions in the legislation, such as for some — but not all —  newspaper carriers, but argued that, when so many look to employers for health care coverage, Medicare for All would help defuse some of the arguments over what it means to be employed.

Overall, Khanna acknowledged the important role of Silicon Valley in the upcoming elections, emphasizing how important it will be to prevent false news on social media to avoid the debacles of 2016.

Nida Qasim Khan is a reporter for Ethnic Media Services. She is a linguist who specializes in South Asian languages.