How Hate Reaches a Tipping Point – Mexicans on the Menu

You’d see this phenomenon in prison. A guy in H-Unit would get beat down real bad with a heavy weight belt and get sent to the hospital with eye damage and missing teeth.

A couple weeks later a guy in I-Unit would get attacked by three prisoners with knives on the third floor but the victim’s boyfriend would run up there with a metal folding chair and turn the tide. One guy would get smacked in the head with a chair, lose his knife and get tossed off the third tier. The initial victim would pick up the dropped knife and start stabbing one of his attackers. In the melee, the second attacker would get throttled by that chair and also go to the hospital. The third knife wielding attacker would eventually get stabbed bad and learn hard the lesson how it ain’t no fun when the rabbits got the gun.

A week later the Spirit Of Chaos dialed up the mayhem and moved next door. A prisoner in J-Unit would be stabbed 32 times. After multiple surgeries he’d survive, lose a kidney, a finger, and 150 pounds. Barely dodged being killed.

Of course, you know where this story is going. Next door. The Dark Spirit drifted.

Like Evil was born in that first burst of improvised weight belt violence and grew legs and moved next door. Then it grew emboldened with the second clash of men and blades, grew desire for more blood in the next unit, and finally grew so powerful it picked up speed.

To K-Unit. Within a week a prisoner would be slaughtered in his bed. Dead Eye told me a guard told him the dead man’s eyeballs were resting on his cheeks.

We all saw it coming. Talked about it. Like something malevolent was moving through the buildings and we all hoped it wouldn’t pick us to land on. But we all felt it’s inevitability. Trained as we were to know how insecurity lurks in every heart and can turn any boy into a lethal missile if directed at someone with the right velocity. We knew the fear was building and so the temperature was rising so the violence would get more baroque. And swifter.

I’ve many times experienced this sort of Violent Tipping Point. I started robbing one bank at a time. I continued robbing one bank at a time, but with greater frequency. Then one day I robbed two banks in one day. Eventually I robbed a bank then the one right next door, before I got to my car, with the police on the way. I suppose that time I robbed four banks in one day was inevitable.

At some point early in every Revolution or Civil Wars in history they all reached a tipping point where they just had to happen. No turning back. No such thing as a reverse birth. The clock had been wound so there was nothing to do but wait to watch it strike. The Reformation tried to happen for a couple hundred years before it finally broke out with Luther. The conditions were set. So the alarm rang.

The physics of rage, the propulsion of the chaos it unleashes, takes a long time to burn itself out once unleashed. Societies break down in terrible bloody ways and the mayhem becomes fuckin gothic. Then the neighbors that survive come back home and repair shit. Till the next great falling down. Think Rwanda. Or the Bosnian War. Things fall apart. The center cannot hold. Ashes to ashes. We all fall down.

Like in prison, after the K-Unit murder, tensions subsided in the prison for a while. Everyone took a long collective breath. Except the dead guy. No more breathing for him. Fortunately, for him, only the dead know the end of strife and civil war.

Sorry to say, but in this country the dye has been cast. It’s useless for sheep to pass resolutions in favor of vegetarianism if wolves and lions got a whole other opinion on the matter. And the white supremacists with three hundred million guns in this country do. So no lion will be lying near a lamb anytime soon. Unless by lamb you mean lamb carnitas tacos. Then yeah, that’s what’s on the menu. Mexican meat. 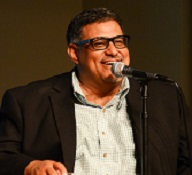 Joe Loya is the author of the critically acclaimed memoir The Man Who Outgrew His Prison Cell: Confessions of a Bank Robber. Visit his website @ https://www.joeloya.ltd/