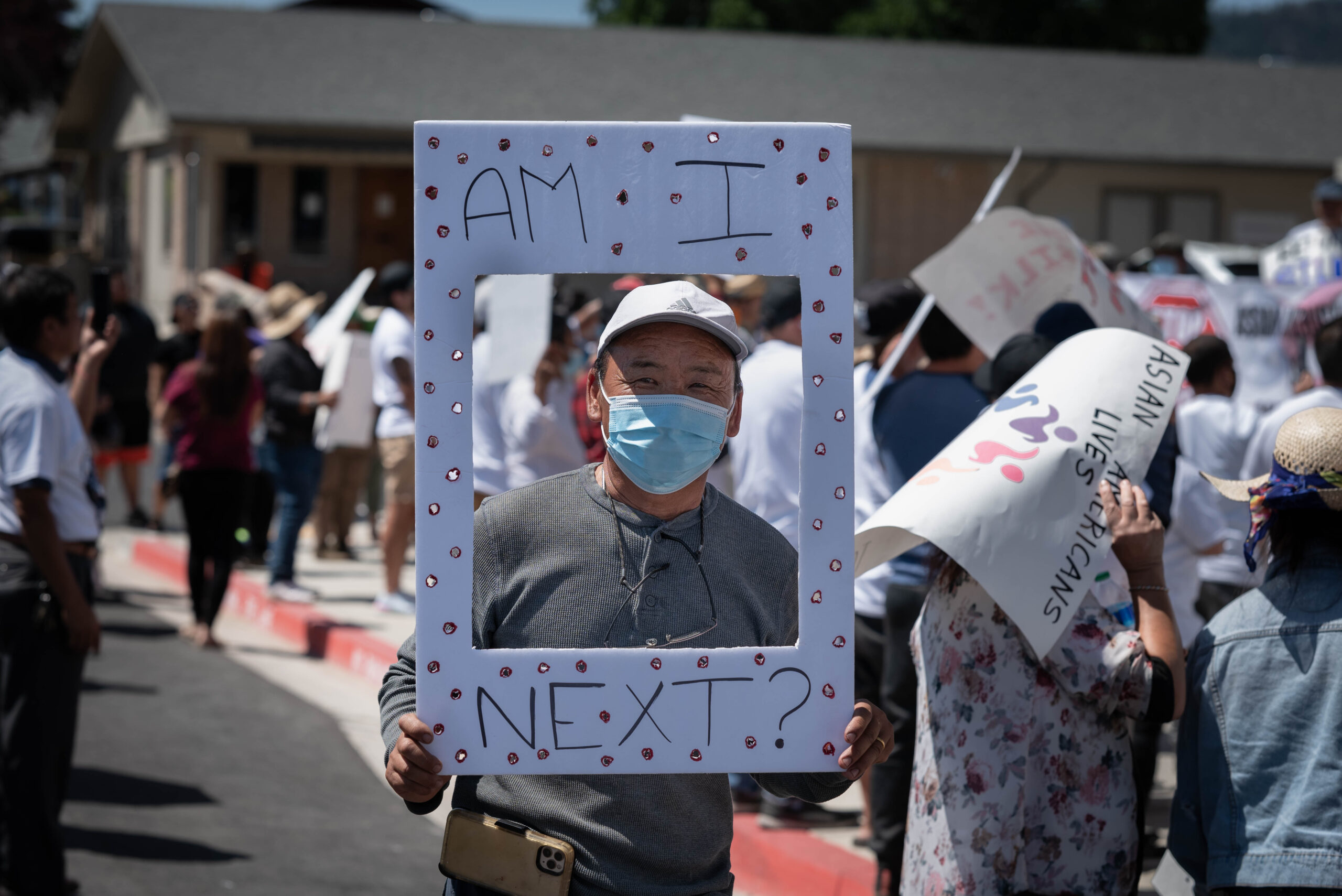 YREKA, California — Over 600 Hmong Americans from across California and as far away as Milwaukee and Minneapolis converged on the Siskiyou County courthouse in Yreka Saturday to demand a federal investigation into the June 28 fatal shooting of a Hmong father of three by law enforcement agencies.

The protest has turned this sparsely populated county nestled in the foothills of Mount Shasta into the newest flashpoint of resistance by Asian Americans against a surge of anti-Asian violence in the state, according to Mai Vang, a Sacramento City Council member who spoke at the July 17 rally.

In this case the targets are Asian Americans of Hmong, Cambodian, Lao and Chinese descent who have settled in growing numbers in the county, many to grown small cannabis plots much as their families cultivated in Laos and Cambodia. The shooting intensified escalating racial tensions between county authorities and cannabis growers.  While cannabis is legal in California, outdoor cultivation is forbidden in Siskiyou County. Farmers can grow up to 12 plants indoors.

The shooting victim, identified as 35-year-old Soobleej Kaub Hawj, allegedly turned the wrong way at a checkpoint on Highway A 12 near Weed during a mandatory evacuation order for the region during the early hours of the Lava fire.  His wife and three children were in a second car behind him.

Law enforcement officials say he was turning back towards the evacuation zone when he was stopped, and that he was pointing a semi-automatic handgun.

Community activists dispute that, saying it was too dark to see inside the truck.  A photo taken by an eyewitness shows the sides of the truck riddled with 21 bullet holes and both side windows blown out. Activists also say an eyewitness video records the sounds of at least 40-60 bullets being fired.

The Siskiyou County Sheriff’s Department did not issue a formal statement, but posted a response on its Facebook page. “Officer involved shootings are complex investigations that take time to thoroughly investigate.  There are certain details surrounding this incident that have not been made public as the investigation is ongoing; however, in the future, once the investigation is completed, a thorough report of the incident will be made public.”

Zurg Xiong – a 33-year-old local activist who began a hunger strike on July 9 to demand justice for Hawj – took center stage at the July 17 rally.  In a letter addressed to Siskiyou Sheriff Jeremiah LaRue and the Board of Supervisors of Siskiyou County, which was circulated among the protestors, Zurg reiterated his demands:  release of all video camera footage, an official investigation into the shooting, and an end to racial discrimination against the Hmong community, including restrictive water ordinances which activists claim target Hmong farmers.

Surrounded by relatives who keep constant vigil, Zurg told protestors he was prepared to die if there is no justice.

Many older protestors, including veterans from the Vietnam War dressed in army fatigues, expressed a sense of betrayal over Hmong farmers being characterized by county authorities as the “Hmong cartel.”

“Why do they hate Hmong people?” asked Dr. Lee Yao Pang of Sacramento who referenced, like many in the protest, the fusillade of bullets fired at Hawj’s car.

“We served U.S. forces in the secret war in Laos, we rescued American pilots, we lost over 35,000 lives supporting the U.S. Now we’re accused of running a secret drug war here.”

“What would a cartel be doing, asking for dialogue and protesting peacefully like this?” asked Ed Szendrey, former chief investigator for the Butte County District Attorney’s office, who has helped veterans from the secret war since the 1990s and came to the protest from Chico. He said the county’s water ordinances were so restrictive they were starving Hmong farmers out of the county.

“It’s as if they assume every drop of water goes for cannabis farming. But people need water to cook, to bathe, to live.  Old couples have to go to the creek to get water now.”

Six Asian Americans filed a lawsuit June 4, 24 days before Hawj was killed, seeking a temporary restraining order prohibiting the Sheriff’s Office from surveilling trucks for water delivery in the Mount Shasta Vista area, where Hmongs make up the majority of residents. The plaintiffs stated that their rights to water had been violated in an ill-conceived plan to abate the growing of marijuana. Read the lawsuit here: https://ecf.caed.uscourts.gov/doc1/033112450266

In its response to the lawsuit, the defendants noted that thousands of pounds of illegally-grown marijuana — with a street value of $59 million to $179 million — had been seized in the area: https://ecf.caed.uscourts.gov/doc1/033112458714

Also banned by county ordinance are jugs carrying more than 100 gallons of water, which activists claim leads to racial profiling of any Hmong driving a truck with water. “The people not only lose the water, they lose their trucks,” Szendrey pointed out.   “Alfalfa and wheat growers use infinitely more water, and don’t get pulled over or challenged for water use.”

The water restrictions are on certain roads which encompasses much of the Hmong community, he said. “Although it is not explicitly stated, this makes it a racist issue. There’s a strong social group that wants to push Hmongs out.”

Szendery and other supporters of the Hmong community are calling for the Justice Department to investigate the shooting of Hawj.

Mary Ly, a wife and mother of two in her 20s, moved to Siskiyou from Denver last year to care for her mom. Ever since the water ordinances were passed, she said, she’s experienced escalating animosity directed at herself and anyone who looks Hmong.

“After the ordinances passed, cars would follow me home.  People would take a picture and flip me off.  I am a young Asian American. What if this were happening to my mom? I’m afraid to have my mom go to the grocery store.”  Ly works in retail and says she sees how clerks disrespect Hmong elders. “I’ve never experienced racism like that before.”

Amidst chants of “Shi lou, Shi pa” – love each other, help each other — speakers and marchers emphasized that along with seeking justice for an unexplained death, their goal was to seek dialogue with authorities.

“We want to show the sheriff we are strong and have a voice,” said Peter Thao, one of the event’s organizers.  “We want to make sure we can get the investigation going and they will release the body footage. But there is an opportunity here to learn about each other and open a dialogue and if law enforcement needs to be taught about our culture, we are open to them.”

John Thoa and his wife run a nonprofit for seniors in Fresno and made the drive to Yreka because “This is a dialogue we need to have – among all our Asian groups – to voice concerns about what is going on here.”

Nhoua Xiong, a Chico state student who was raised in Milwaukee, felt inspired to join the protest by Martin Luther King, Jr.’s call that “injustice anywhere is injustice everywhere.

We have put aside tribal issues – we have 18 clans – and we are learning after just 50 years of being in the US what it means to be American—to have the right to dissent.”

But the optimism and call for dialogue is tempered by despair over the everyday cruelty Hmong say they experience.  Among the demands in Zurg Xiong’s letter to the Sheriff and the Board of Supervisors is that Hawj’s dog Silk, who was also shot, be released immediately to the family. Silk was taken by law enforcement officials the night of the shooting and reportedly will be “adopted out.”