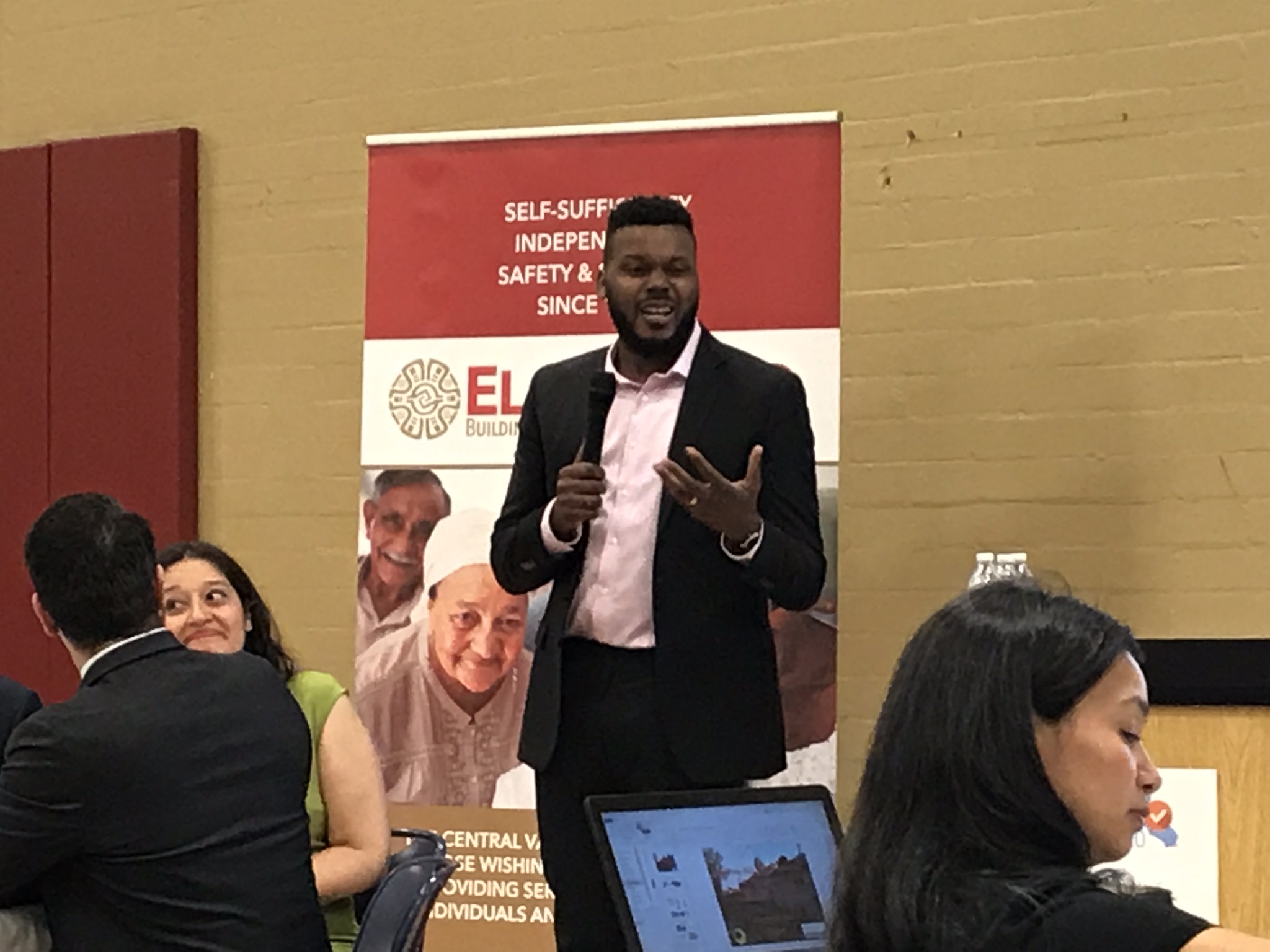 Stockton Mayor Michael Tubbs welcomes attendees — a roomful of about 60 government officials, community organizations and media — at San Joaquin County’s Everyone Counts in Census 2020 Kickoff on Wednesday, May 29 at the Stribley Community Center in Stockton.

STOCKTON, Calif. – The city of Stockton, led by Mayor Michael Tubbs, along with community leaders and state and federal government officials tasked with boosting participation in next year’s census, kicked off an “Everyone Counts” campaign Wednesday, May 29, at the city’s Sibley Community Center.

Getting a complete count of everyone living in the United States is crucial in so many ways that many state and local governments across the country have dedicated staff and funding to try to maximize their communities’ participation in the census. In this, California has led the way with more than $100 million devoted so far to “complete count” efforts, including the San Joaquin County Complete Count Committee that was a key organizer of this event.

“We have no interest in going back to 1950,” Tubbs told the lunchtime gathering of about 60, referring to some of the challenges the 2020 Census will face. “We’re about being a progressive community where everyone counts. Our diversity is our strength.”

The current White House administration has taken its controversial effort to add a question to the census about citizenship status all the way to the Supreme Court, despite court after court across the land agreeing with Census Bureau and census experts’ opinions that such a question would discourage participation.

Many of those most at risk of not being counted in the census are the very ones who would benefit most from being included in census data and thus in decisions about how to allocate hundreds of billions of federal funds every year, how to fairly adjust political representation, and in business decisions, too, that are made based on that data.

“Everyone has to count; everyone has to matter,” Tubbs said. Recent immigrants “are the engines of our community. A lot of things we need require funding.”

Citizenship, he emphasized, hasn’t been a topic in the decennial census questionnaire since 1950. That, Tubbs said, precedes the Supreme Court’s 1954 Brown vs. Board of Education decision that mandated integration of the U.S. education system. 1950 also predates significant civil rights legislation, he added.

“We’re not going back to a time that never was good for so many of us,” he said.

Besides the proposed citizenship question, other challenges to getting a complete count include a first-ever attempt by the Census Bureau to collect questionnaires online, decreased funding for testing new procedures or for staffing the census-taking effort.

All seem likely to result in an undercount of people in communities that are lower-income, have high concentrations of immigrants or are not primarily English speaking.

Cindy Quezada, director of research and special projects for CVIIC, the Central Valley Immigrant Integration Collaborative, who helped organize the event, narrated a slide presentation on a variety of challenges to obtaining a full count and strategies for overcoming those challenges.

Among the problems: the prevalence of unconventional housing ꟷ backyard trailers, converted garages and other “hidden housing” units, such as those that don’t meet building codes ꟷ that won’t be included in the original list of addresses that will be mailed reminders at the outset of the census-gathering process.

Quezada cited studies estimating that 3% of legal residents and 5% of undocumented immigrants reside at such locations. One early task for census workers and organizations trying to fully count their communities is to identify such dwellings.

With a rough estimate that communities will lose out on $2,000 annually in federal support for every person not counted in the census, Quezada cited findings that, in this category alone, Stockton faces the potential annual loss of $30 million to $41 million in federal funding. In Fresno, the research found, that number is between $17 million and $35 million.

Other challenges to complete enumeration include the fact of housing units shared across generations or among multiple families; a lack of internet access, particularly among those most likely to participate (seniors) and the absence of U.S. Mail service that would help ensure people’s inclusion in census outreach.

Between the use of Post Office boxes, shared mailboxes and other variants, “20% of immigrant households lack standard mail delivery,” Quezada said. Among Latinos, 24% have no internet access, twice the rate of non-Latinos, she added. In all, 25% of San Joaquin Valley households won’t get either mailed census materials or be contacted by an enumerator, or will face language and literacy barriers that will prevent them from being counted.

It’s not just outreach that the government and community organizations seeking a full count have to provide, she said, but help ꟷ such as “user-friendly questionnaire assistance centers.”

“We can’t allow people to ignore us,” said Lisa Vela, of El Concillo, another event organizer, who moderated the afternoon session. Echoing Mayor Tubbs, she added, “We can’t disappear in the state of California and the nation. We can’t have that happen anymore.”

Blanca Banuelos, of California Rural Legal Assistance, offered some encouraging words, talking about the work of her organization, which provides free legal assistance to farmworkers. “If we can get them to file suits against their employers, we can get them to be counted,” she said.

Pastor Trena Turner, of Faith in the Valley, appreciated the challenge at hand, though. The hard-to-count communities, she said, “have a thousand other priorities pulling at them. If we just drop paper, talk about it one time or two times, we’re not going to get people to respond.”

But, she said, relating experiences gained in get-out-the-vote efforts, “If I sit down and talk to you, either on the phone or face to face,” the response rate jumps to 60-80%.

“We have to have face to face!”

“Government is necessary, but not sufficient,” Tubbs had said earlier in commending the willingness of community organizations to get involved.

Among the other speakers were Tracy city councilmembers Dan Arriola and Rhodesia Ransom, and community leaders including El Concilio’s Jose Rodriguez, Ron Freitas of the Lodi Unified School District, Lani Schiff-Ross of First 5 of San Joaquin, Christian Clegg, Stockton’s deputy city manager and a partnership specialist from the U.S. Census.