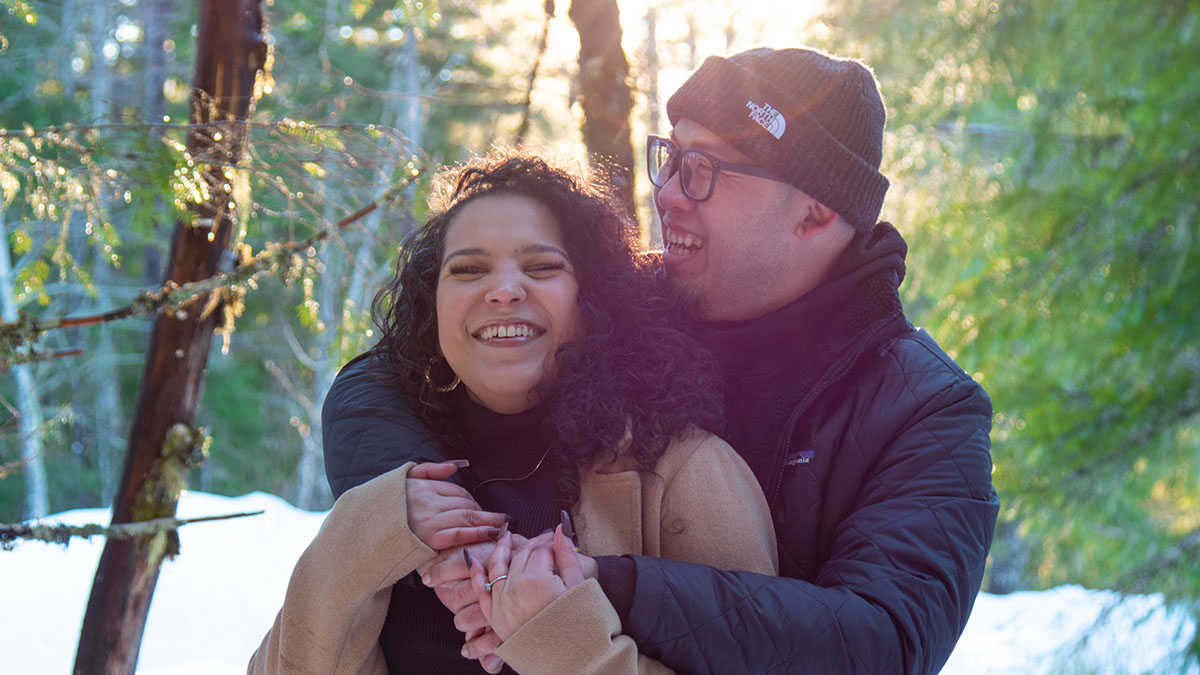 Regina Lewis-Abella and Tyrone Abella are newlyweds, although they have been together nearly 10 years.

Regina identifies as biracial – Black and Latina, a Mexican-American with a bit of Southern Italy sprinkled into her ancestry.  Tyrone is Filipino.

They met at a friend’s party. “When he introduced himself, I told him, ‘Tyrone can’t be your real name!’”  Regina laughed.

“I thought he was really cute.” She asked for his number and gave him her’s.  Later that night, he sent her a text to ask if she got home all right.

“I thought, let me see where this goes, and if it doesn’t go anywhere, I just found a friend,” she said.

Regina has always had an affinity for Asian art and culture but she had never dated an AAPI man before.  “It wasn’t like I was dating him because he was Asian. It was just more of being with someone who could get my sense of humor and wasn’t intimidated by me and could see who I was as a person.”

When she took him home to meet her parents, there was a slight pause.

“My mom was the one who opened the door and of course she was gracious as always as the hostess. My dad was barbecuing and asked me quietly, ‘Regina, is he Korean?’ I said ‘No, he’s Filipino.’ My dad said, ‘Oh, okay… the name is a little misleading. But that’s okay, okay.” Regina giggles at the memory. “He said ‘okay’ a lot as he got his head around it.”

Tyrone is a popular guy yet a man of few words.  When he first met Regina, he says, he found her to be “cool and interesting.” Asked to describe their relationship, he offered a two-word summary: “Opposites attract.”

Like her mom, Regina punctuates her conversation with laughter and is always ready to explore something new. Ty said he was once a “party animal” but is now content to be alone with Regina at home.

“With me he’s chatty but for the outside world he doesn’t talk just to talk. He’s the strong, silent type who urges me to pause,” said Regina.

The couple’s family history and life experience is different yet has similar threads.

Regina grew up aware of being the child of mixed-race parents who turned heads in their younger days – her father is tall, Black and handsome, her mother, a light complected Mexican American with an enviable figure.

It was a different time in the ‘70’s and they faced more stigmas and closed minds as an inter-racial couple than she and Tyrone have faced, she said.

When she was 13, her father took the family to the small town of Crockett, Texas “to show us where his grandfather came from.  When we all walked into a local convenience store, a woman said loudly to her son, ‘Look, if you marry someone Black, see what happens!’”

“I saw red,” said Regina, “but my father took me aside and said, ‘Look where we are and where this woman grew up’.”

Her parents had moved from LA to the city of Fontana where you could buy a nice, new affordable two-story home in a diverse neighborhood and send your kids to decent public schools.

But in school, Regina found what many biracial children experience: a feeling of not being able to fit in one group or another.   “Some kids in middle school would call me a ‘poodle’ because of my curls. Other people would try to touch my hair. They’d say, ‘Oh, you’re not Black, because your hair isn’t ‘nappy,” she recalled

“For kids nowadays being biracial is more celebrated. But for me, I found people were really trying to put you into a box. That felt like you were ‘less than’ – you weren’t Mexican enough to fit in with Mexicans, you weren’t black enough to fit in with African American people.  At the same time, you know you’re obviously not white.  You couldn’t really find your home base of people.

“Over time, I kind of lost who I was because I struggled with identity. I hated those forms that asked you to check off the box that labeled you.”

For Tyrone, growing up Filipino in a Mexican neighborhood in La Puente, he was the minority. “I was only one or one of two Asians in my classes,” he said.  “Accustomed to Latino culture, it never felt different to interact with Regina’s family.”

When it was time for Regina to meet Tyrone’s family, “he gave me a cheat sheet of the ‘Aunties’ you need to get to know,’” Regina said.

After the couple  moved in together,  Regina placed a photo of them on her desk at work.A Latina co-worker referred to Tyrone as “Chinito,” even after she had  informed her that he was Filipino, not Chinese.  The co-worker continued with taunts, asking if it was true about “what they say about Asian men.”

“I told her ‘if I have to keep talking to you about this, I’m going to have HR educate you…I’m not going to be part of your joke, this is the man I love.’”

In Christmas 2021, Tyrone proposed to Regina surrounded by his large family who videotaped him getting down on his knee as he nervously asked Regina, ‘Will you marry me?’  They married last September. Regina wore gold and Tyrone had a custom-made Barong shirt with gold stitching – a symbol of Philippine heritage to be worn with dignity. Regina’s brother Jimmy was the “flower guy,” her father walked her down the aisle even with a bad hip, and her sister Jessica had herself ordained so she could conduct the wedding ceremony.  Once married, they danced their way down  the aisle.

During the pandemic, Tyrone’s mother received a job offer in Washington state and Tyrone and Regina decided to join her.  They’re now working on building a house from the ground up.  Regina travels back to Fontana once a month to connect with her office and visit family.

Regina reflects that if they were to have children, they would be checking the boxes that indicate “Asian, Black, Latino and Other.”  She knows they will have their own challenges because they will grow up in a place without a lot of diversity and won’t fit squarely into a box on a form. They will learn to carve out their own unique space.

Regina and Tyrone have the life experience to know that multiculturalism “means more, not less.”  “On an intellectual level, I have someone that I can go back and forth with, bounce ideas off of and feel free to live in a beautiful place to love life and each other,” said Regina.