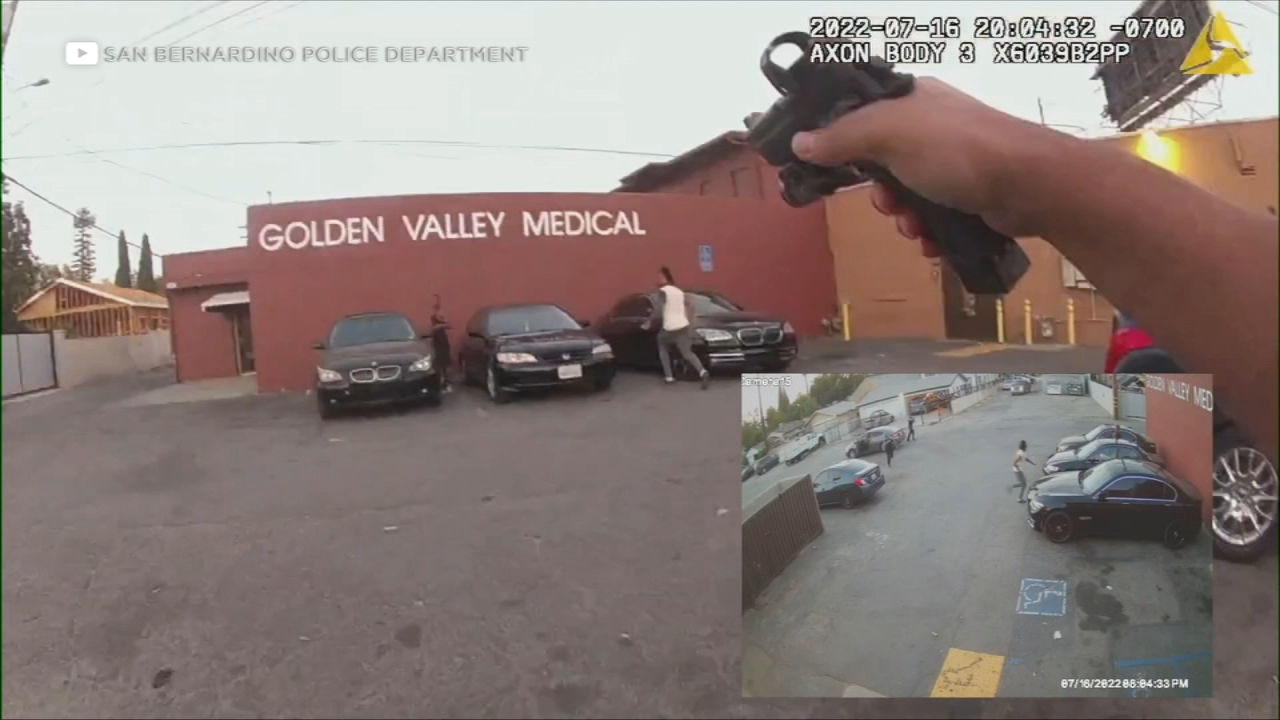 Attorneys for the family of 23-year-old Rob Marquise Adams, who was killed by police in San Bernardino this past weekend, held a press conference Wednesday to denounce what they describe as a “horrific execution.”

Civil rights attorney Ben Crump, who is representing Adams’ family, called Saturday’s shooting “cowardly,” questioning how it is that a black man running away from the police could be considered “the biggest threat in America.”

Crump also represented the families of George Floyd and Brionna Taylor, both of whom were killed by police in high profile cases that fueled the Black Lives Matter movement. Saturday’s shooting comes weeks after police in Akron, Ohio, fired more than 60 rounds at Jayland Walker, a 25-year-old Black man who was also fleeing.

Surveillance video released on social media shortly after the July 16 shooting shows an unmarked vehicle with tinted windows slowly rolling into a parking lot. According to police records the officers were responding to reports of an armed man in the area.

In the video, Adams is seen running in the opposite direction as two men emerge from the vehicle, guns drawn. One of the officers, who has yet to be identified, fires several shots, striking Adams in the back. He was later taken to a nearby hospital where he died from his wounds.

On Tuesday San Bernardino police released additional footage of the shooting, including body cam footage from the officers involved, that they say provides further details left out of or obscured by the initial video.

According to San Bernardino Police Chief Darren Goodman, Adams was armed with a 9mm pistol and initially approached the vehicle before fleeing between two parked cars. Officers believed Adams intended to fire on them from behind the vehicles.

“Fearing that bystanders’ or the officers’ lives were in danger, one of the officers fired his gun, striking Adams,” Goodman said in a statement.

Crump and the Adams family challenged that interpretation. “He was rejoicing about his friend’s car, and he was talking to me on the phone about it,” said Adams’ mother, Tamika Deavila King, who said she could hear the shots fired as she was speaking to her son.

Both she and Crump say they have yet to see any evidence that Adams was armed, suggesting that Adams was in fact holding a cell phone when officers fired.

Others are also questioning police tactics in the shooting.

“They claim he ran away, yet in the video it is like a classic drive by shooting,” says Attorney Bradley Gage, part of the team of lawyers representing Adams’ family. “It was an unmarked car, rolling slowly. All of a sudden, two men jump out and you see evidence of shots fired. There is no warning.”

Gage, who spent close to four decades representing police officers, also questioned why there was only one unmarked police vehicle on the scene. “If you believe he is dangerous, why is there only one unmarked car. You see on the video lots of police after he was killed. Why weren’t they there?”

San Bernardino City Councilman Ben Reynoso told the Guardian newspaper after watching the video he believed the officer should face criminal charges for the shooting. And like Gage, he questioned police handling of this and past incidents. “How often do we deploy these tactics? And to what end?”

Attorneys fielded a bevy of questions from reporters after the briefing, including allegations of past misconduct within the San Bernardino police department.

Gage said he has handled previous cases involving “cover ups” among San Bernardino police, noting “officers who tried to do the right thing got retaliated against.” He did not specify which cases he was referring to.

A state auditor’s report released in April cited San Bernardino along with four other cities for failing to mitigate against racial and ethnic bias among its officers, saying the departments had routinely neglected to examine the potential for bias in officer-involved incidents. Among its recommendations were “more robust community engagement strategies” and training.

A protest rally is scheduled for this Saturday in San Bernardino as outrage over the shooting of Adams grows.

“We see young white men, confirmed mass murderers, and the police don’t get out and shoot,” said Crump. “When it is a black person, they just start shooting. How can you explain that San Bernardino? They shot over 7 times… they emptied the clip in his back.”

“That is why this family and this community is devastated.”