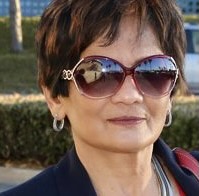 By Julian Do, Ethnic Media Services

Hassina Leelarathna, who co-founded with her husband the first weekly newspaper to serve the Sri Lankan diaspora in the United States, died on October 17 at home in Los Angeles. The cause was cancer. She was 73. A respected voice in a community that now numbers 60,000 concentrated in Los Angeles and New York, Hassina was also known for promoting cross-ethnic dialogue and for incubating a new generation of Sri Lankan-American journalists.

“Historically, ethnic newspapers have been committed to recording events in communities ignored by the larger society, serving as a forum for the debate of ideas, elevating the self-perception of stereotyped communities, affirming their rightful place as members of the nation, and defending their rights. The Sri Lanka Express accomplished these and more things,” writes Dr. José Luis Benavides, journalism professor and director of the Tom and Ethel Bradley Center at California State University-Northridge, in his tribute.

Born in Sri Lanka, Hassina immigrated to the San Francisco Bay Area in 1975 with her late husband Deeptha Leelarathna. Together they founded Sri Lanka Express (SLE) which she continued to run after his death in 2006. More than 40 years later, it remains the most influential media platform for their community, covering everything from the decades-long civil war in their former motherland to immediate issues confronting Sri Lankans in America like jobs, health, education, immigration, and presidential elections.

Besides the publication, the husband-wife team also created and hosted the weekly two-hour radio program ‘Tharanga’ in Sinhalese and English on KFJC Radio in San Francisco and then at KPFK Radio when they moved to L.A. in 1985.

Within days after the Tsunami hit the Asian nations of Sri Lanka, Thailand, Indonesia, and India in December 2004, Hassina became a regular figure at many Asian consulates and community meetings throughout Southern California to discuss emergency relief and fundraising to help the Tsunami victims.

While actively working with relief agencies, Hassina and Deeptha didn’t forget their journalist responsibility. When Deeptha visited Sri Lanka in 2005 and discovered so much of the international aid was either siphoned off or still stuck at the ports and not delivered to the victims, SLE was among the first media to report on the corruption and inefficiency at many government agencies and international aid groups.

The paper also profiled individuals and small grassroots organizations as heroes in the relief efforts. One story featured a Vietnamese American Buddhist Temple in Orange County that helped rebuild some of the Buddhist temples in the Tsunami affected region in Sri Lanka.

When Deeptha became ill, Hassina became the face of SLE. To foster inter-ethnic communications between and among diverse communities, she participated in many media forums including the SPJ-Inland Empire convention in 2004 and the Arab American Press Guild in 2005. She collaborated with the San Bernardino-based Black Voice News on a story about the aftermath of Hurricane Katrina in 2005. More recently, SLE reported regularly on the impact of COVID-19 on communities of color, protests over the George Floyd murder, the Black Lives Matter movement, and the Dream Act.

Over the years, Hassina developed a strong connection with CSU-Northridge, located in the San Fernando Valley where SLE is also based.

She provided internships at SLE and served as an advisor to CSUN’s bi-lingual student publication El Nuevo Sol on a health-reporting project. In memory of her husband who passed away in 2006, she created the “Deeptha Leelarathna ” Scholarship at CSU-Northridge’s Department of Journalism in 2007 and gifted the SLE newspaper collection to the university library early this year.

Dr. Benavides says: “We recognize the importance of this newspaper as a record of the history of the Sri-Lankan community in the United States, and also recognize the entire intellectual legacy of this amazing couple devoted to journalism—Hassina and Deeptha Leelarathna.”

Hassina and Deeptha Leelarathna are survived by their son Sahan.