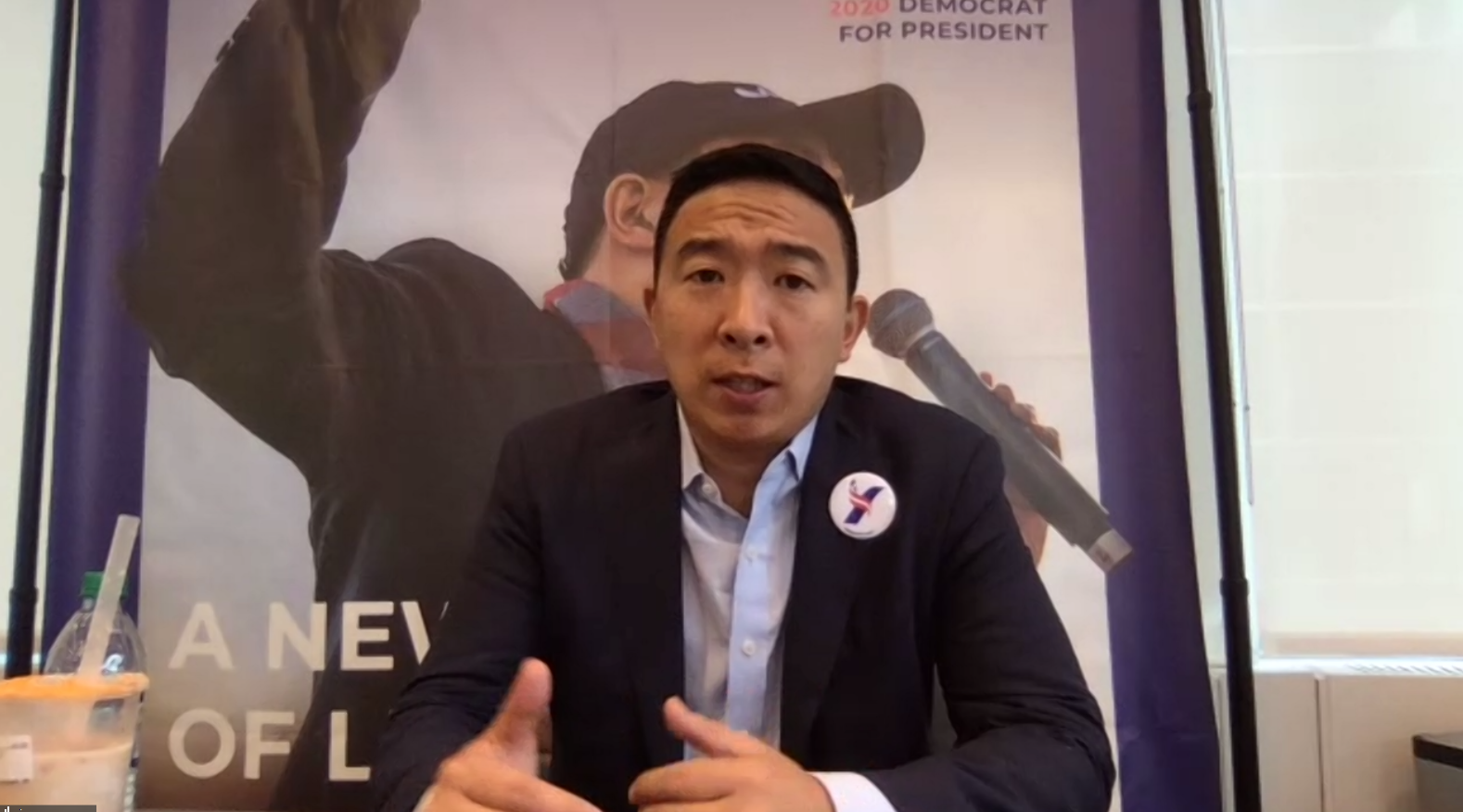 Pleased to be offered a bubble tea as he sat down at a dais, Yang greeted about four dozen ethnic media representatives by noting how his own parents, after immigrating to the United States, had relied on Chinese newspapers for news and loved watching Chinese television as they raised their two sons.

He’s an entrepreneur, not a politician, he said as he introduced himself. Before deciding to run for president, he spent the past seven years, he said, “creating thousands of jobs in Ohio, Michigan and Alabama … but it was like pouring water into a hole in the bathtub.”

“Technology is transforming our way of life,” he said, and “our political system in America is way behind the times in understanding technology.”

Yang was queried repeatedly about his position on immigration issues. Emphasizing the contributions immigrants, including his own family, make to the U.S. economy, he cited his own father’s 65 patents for General Motors and IBM and the proliferation of immigrant and second-generation leaders in upper corporate echelons in Silicon Valley as examples of how immigrants make the country “stronger and more dynamic.”

“My immigration policy,” he said, “has a number of facets.” Among them would be to “greatly expand” the H1-B visa program, which he said, “has zero crowding-out effect on American workers.”

If companies couldn’t hire the people who obtain those visas in the United States, he said, "they would hire them in another country.”

For those who come to the United States to get an education, he said, “we should staple a green card to their diplomas. We should get them to stay.”

Immigrants don’t cost U.S. citizens jobs, he said. It’s automation and technology that are driving the transformation, he said, and Washington politicians who aren’t up to the challenges of changing with the times,” he maintained.

Looking ahead to the next Democratic candidate debate, July 30 and 31 in Detroit, he described that city, where he worked nine years, as an archetypal example of the transformations buffeting U.S. society, and the government’s inability to navigate a changing world.

Detroit, he said, has gone from a city of 1.7 million people to 680,000 as it’s lost hundreds of thousands of manufacturing jobs due to automation. Current retraining programs, he’d said earlier, are ineffective – he cited a success rate of 15-20%, leaving us instead with record levels of disability and suicide and overdose rates that for the first time have overtaken vehicular accidents as the country’s leading cause of death.

He also advocated for “securing the southern border,” to “put resources in place so there’s a humane policy” and to “create a new path forward” for 12 million undocumented immigrants already in the country – too many, he said, to be deported without crashing the economy. In response to another question, he also said that the U.S. should “of course” do what it can to ease the pressures in nearby countries that force people to take their chances on emigrating to the U.S.

Yang’s campaign is perhaps best known for his “Freedom Dividend” proposal to guarantee U.S. adults a monthly $1,000 stipend. In response to a reporter who questioned the possibility that the concept might seem too “communist” for American voters, Yang responded that the money, which he would fund through a tax on corporations such as Amazon that currently do not pay taxes despite being ”a trillion dollar company.”

“If Americans get our fair share, there’s lots to go around,” he said. Furthermore, he argued that $1,000 per month would hardly be a disincentive to work, but would allow new mothers to tend to their children, teenagers to stay in school and boost the economy and create jobs by putting more disposable income into circulation.

The GOP-dominated state of Alaska, he said, already has such a program, passed by a Republican governor in a very pro-market, pro-business political climate. He also cited JP Morgan Chase CEO Jamie Dimond’s recent advocacy for “something similar,” a negative income tax, Yang said, commenting with a chuckle that Dimond is “not very communist, or socialist.”

Asked about climate change, he described it as “an existential threat” and said the government “needs to do much more.” Too often, he said, the government acts merely “after the fact” of a disaster and instead “needs to be engaged in making communities more resilient.” As an example, he said that the National Parks System invests about 5% of what experts believe should be dedicated to tending its lands, leading to wildfires quickly burning out of control.

“The federal government is the natural leader,” he said, and disasters such as the Pasadena Fire he was asked about could be prevented “if we provided better resources.”

Yang cited an interview he’d done that has been viewed or listened to a combined 10 million times in various social media platforms as a transformative moment in his campaign so far, although he said at the outset of the conference call that he acknowledges only ranking “seventh or eighth” among the candidates so far. That interview can be seen here (https://www.youtube.com/watch?v=cTsEzmFamZ8).

Yang said politics is an unusual career path for his culture, but he’s proud to be the first Asian American to run for president as a Democrat and suggested that his campaign will counter fears generated by the rise of racism and hate in the United States.