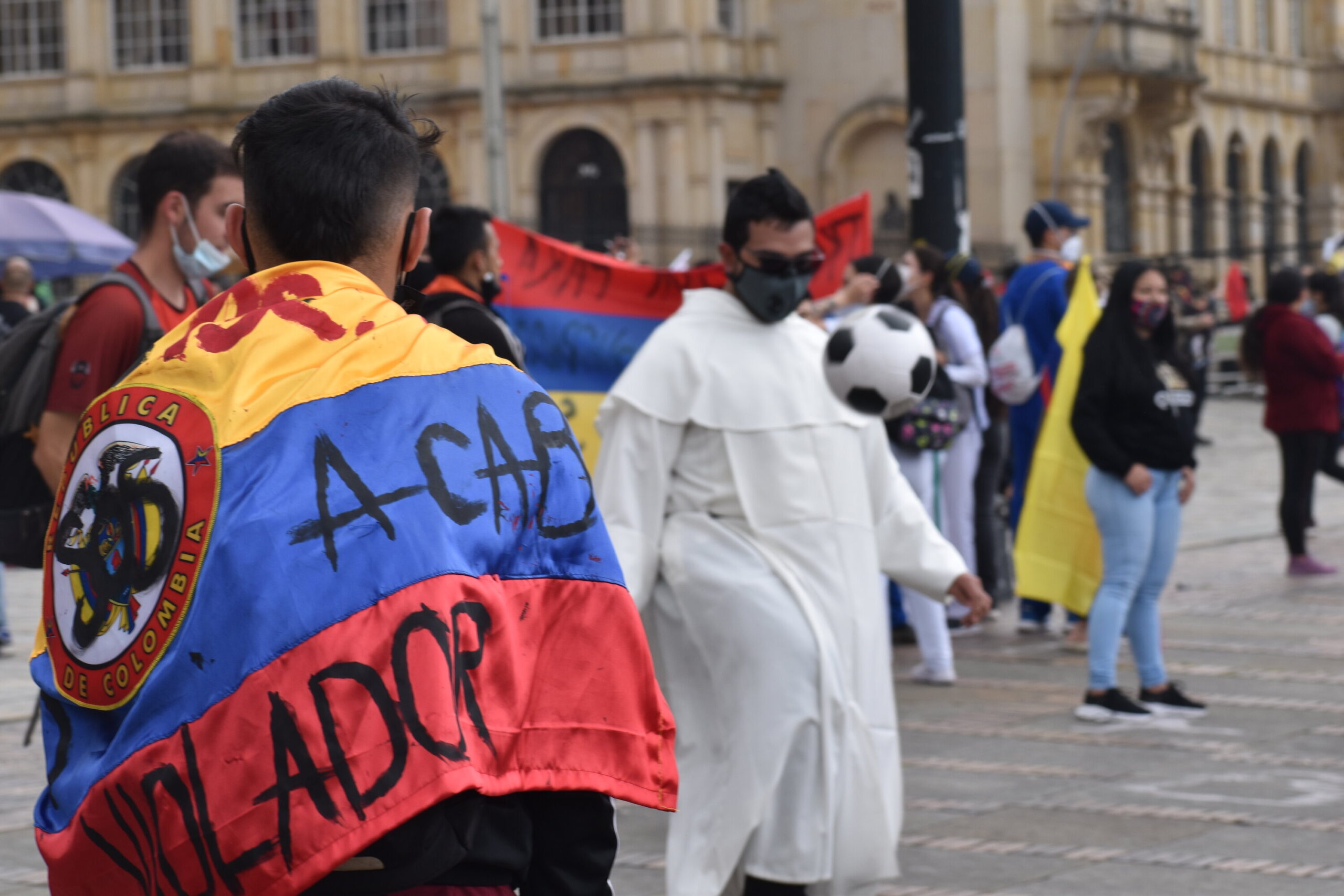 Joshua Collis is a freelance journalist based in Colombia who has reported for Al Jazeera, Vice and the New Humanitarian

Bogotá, Colombia – Deisy Paricio lights candles at a remembrance ceremony in the neighborhood of Soledad for those who have died during 10 bloody days of protest in Colombia. “We’re here to denounce the actions of a criminal regime,” she says, with a cold determination in her voice that borders on fury. “We’re demanding justice. We are demanding dignity for the victims of this government.”

Around her, a few hundred protesters hold torches and candles in their hands. They chant over and over again in rhythmic unison “The people, united, will never be divided.”

After a few minutes of silence, a speaker reads the names of the 34 people who have lost their lives since the nationwide protests began on April 28. After each, protesters bang the pots they have brought along just for this purpose, a Latin American communal protest tactic that dates back decades called a cacerolazo.

The mood at the remembrance ceremony is very different than just 8 days before when tens of thousands took to the streets in song and dance, in a massive and festive protest march downtown, where they were promptly gassed by police forces and street skirmishes between angry youth and Colombian police spiraled into the side streets of the labyrinthine Bogotá downtown.

Day by day the mood has grown more grim as state violence continued to escalate against mostly peaceful protests. Police have confirmed 34 deaths, though they say 7 seven are unrelated to the protests. NGO’s in the region claim the actual numbers are higher than official statistics reflect. Temblores, a human rights group in Bogotá which has been tracking the violence, reports 37 deaths and over 300 wounded, with 1728 total registered cases of police violence. 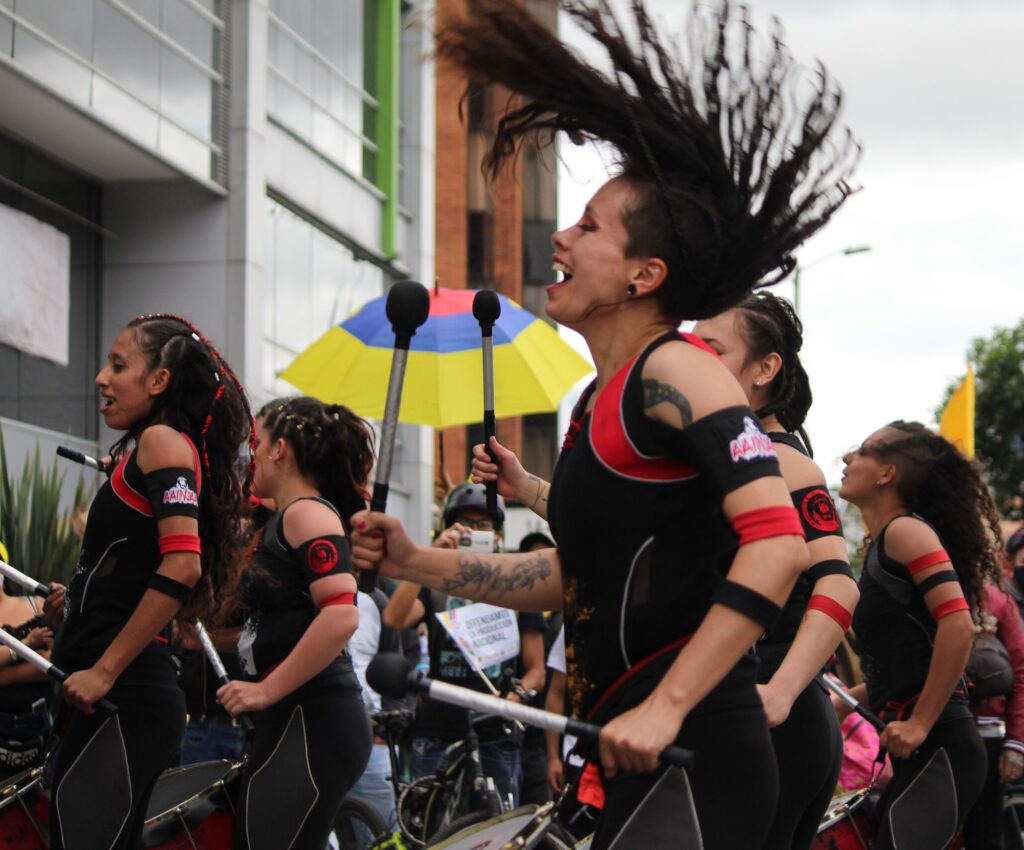 Drummers perform for protesters at a march reunion point

“We have watched the increasing violence with extreme concern,” said Alajandro Lanz, co director of Temblores. “Most of the victims we have registered have been young who were protesting peacefully. There is no guarantee of life for anyone.”

Social media is flooded each night with a stream of graphic and disturbing videos of violence, mostly at the hands of police, as youths wage running battles in the streets amidst tear gas and flashgang grenades.

Both Temblores as well as another NGO, Indepaz, a peace monitoring group in Colombia have reported receiving credible reports of indiscriminate police fire against civilians amidst the chaos.

“I have to go,” Lanz told EMS at 9 pm Friday, cutting short an interview. “Like every night we are about to start receiving reports of the violence occurring across the country. Our investigators and lawyers will be focusing all attention on that over the next few hours.”

Activists called for a national strike in Colombia almost a month ago over rising violence, a spree of killings of social leaders, rising poverty as well as inequality and what critics see as failed promises on the part of the administration of president Iván Duque in regards to the country’s 2016 peace accord with the rebel group the Revolutionary Armed Forces of Colombia (FARC by their Spanish acronym).

The deal brought an end to a 50-year civil war in Colombia, but was also highly controversial. Duque won elections in 2018 promising to dismantle aspects of the accord, and he has fulfilled those pledges. Promised investments to rural communities never arrived, tactics in the drug war escalated and those who lost their lands in the half century conflict, who hoped peace meant that they could return home are still waiting.

Those issues have been boiling over a low heat for years, and culminated in 2019 with massive protests that were put on hold by the arrival of COVID to Colombia. Protests idled under extreme lockdown measures and a crippled economy that raised the poverty rate to 42.7%.

A deeply unpopular tax bill that would have increased the cost of food and basic consumer goods gave the protest movement a huge boost in popular support, and was largely reported as the banner issue driving the movement, but severe police crackdowns and hardline rhetoric from Duque’s party soon displaced taxes as the main focus of those in the streets. The controversial bill has since been withdrawn, but the protests have morphed into a deeper discontent with the government itself. 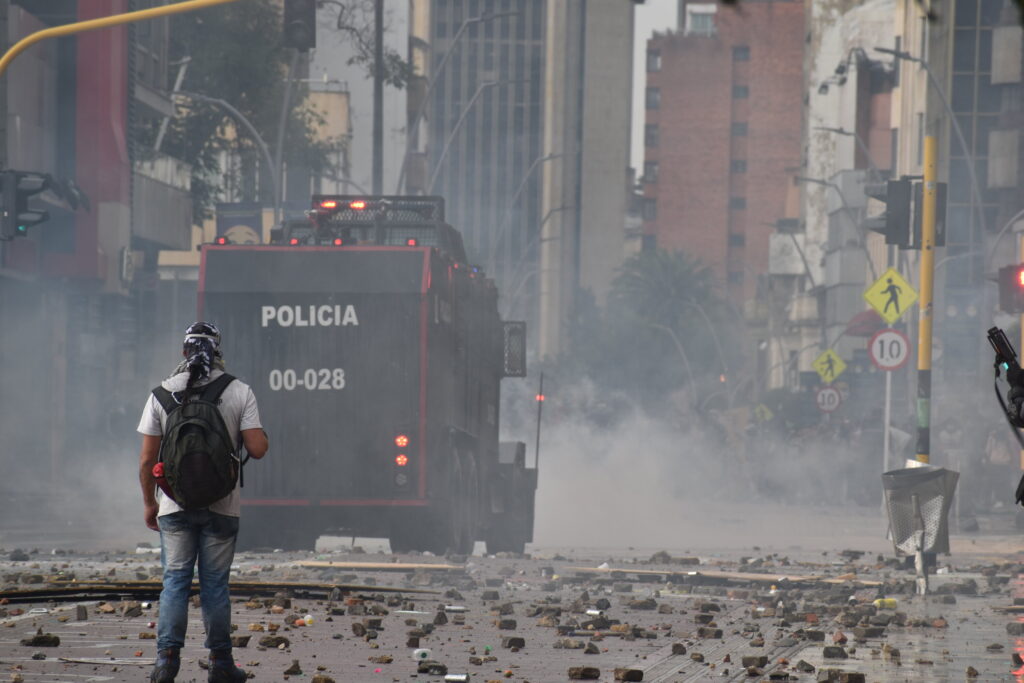 The government’s response has been mostly one of hardline rhetoric against protesters. The presidential advisor on human rights, Nancy Patricia Gutiérrez, stated in an interview with Semana magazine that “Human rights only exist for citizens that fulfil their duties as part of society.”

Various politicians from Duque’s Centro Democratico party have described those in the streets as “terrorists”, “narcos” and even claimed that the protesters are organized by guerilla groups. These accusations have been made without evidence.

“Momentum for now is clearly with the protesters,” said Sergio Guzmán, director of Colombia Risk Analysis, a research and consultancy group in Bogotá. “The government is also aware that it is behind in the narrative and grows increasingly desperate. The administration has offered nothing but a rhetoric of fear since these protests began. But outside of their base, they are not finding a receptive audience.”

Meanwhile, the government has militarized multiple cities and even publicly discussed declaring a state of national emergency, a move that could mean suspending the right of protest.

The United Nations, Human Rights Watch and the US Embassy in Colombia have all called for de escalation and for protester rights to be respected.

Back in Soledad at the ceremony for those who paid the ultimate price during the protests, Ana, who declined to give her last name, sat with her boyfriend— the couple holding hands as the last of the victims’ names were read.

“We just want president Duque to listen to what we have to say,” she said. “It seems like all the politicians, all the experts, all the media want to tell us what we think.”

“This violence was so senseless. It could have all been so easily avoided if they just listened.”