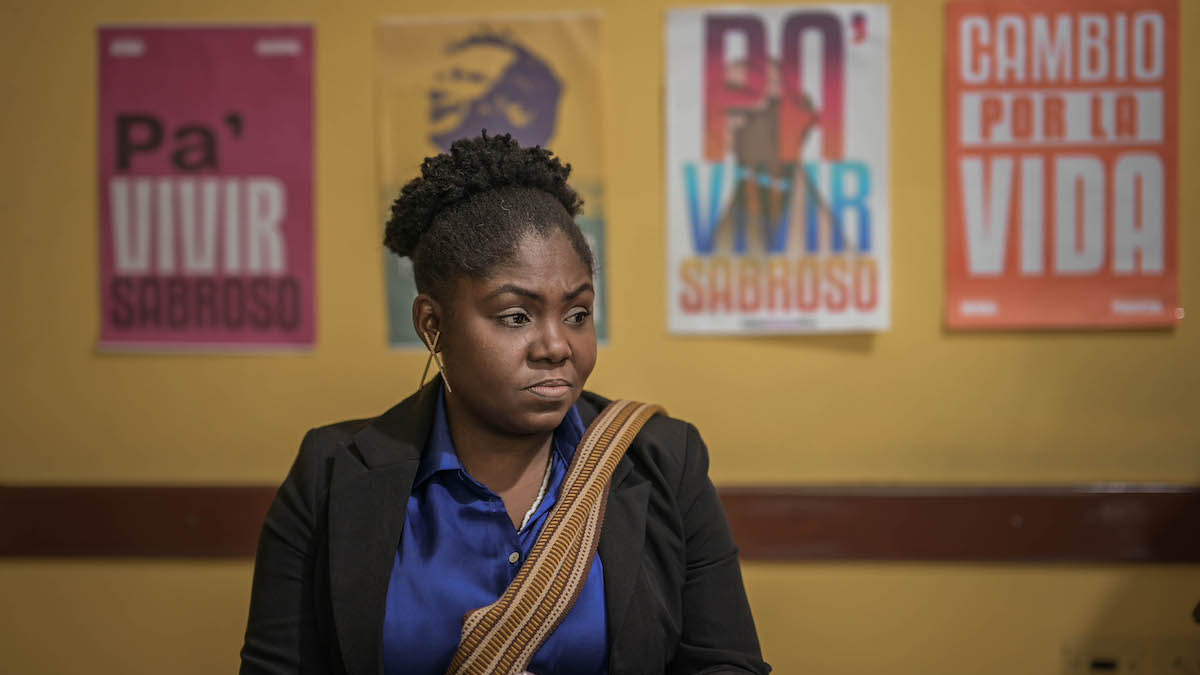 Editor’s Note: The close of the first round of voting in Colombia’s presidential race this week portends a “seismic shift” in the country’s traditional power base. After decades of dominance by former right-wing President Alvaro Uribe, voters chose their preferred candidates for a June runoff. Gustavo Petro is a former guerrilla fighter who could become Colombia’s first ever left-leaning president. His opponent is Rodolfo Hernández, a successful businessman many liken to former U.S. President Donald Trump for his brash style and racist rhetoric. EMS spoke with veteran reporter Manuel Ortiz Escámez—who is in Bogotá covering the elections—about what the results mean for minority communities in a nation clamoring to move beyond its conflict-ridden past. (Image: Colombian vice presidential candidate Francia Márquez. Credit: Manuel Ortiz Escámez)

How are Colombians responding to the latest election results?

When I landed in Bogotá, several days before the election, the first thing I did was go to a meeting of young activists, all of them Petro supporters. When I got there, they were already celebrating as if they had won, as if Petro had won the presidency. They were talking about how they are going to govern, strategizing over policies and issues. Many people were like this. There was an almost festive mood in the air. But then we saw the results. Many could not believe—many still can’t believe—that someone like Rodolfo Hernández would garner so many votes. The feeling has changed a lot in just these past few days.

Petro would be Colombia’s first left-leaning president. His vice-presidential pick is an Afro Colombian feminist and activist. What has his campaign meant for Colombians?

It has meant a lot. I don’t think people see Petro as a savior, necessarily. Some people don’t event see him as a leftist, more of a centrist. But for minority groups here in Colombia—indigenous, Afro Colombian, displaced farmers—Petro, and more specifically Francia Márquez, his VP pick and a longtime community leader, represents hope. This is the only hope they have had after decades of violence and control by mainly whites. That is why the black vote in the Pacific region was almost 100% for Petro.

What do you think is driving support for Hernández?

Hernández is a wealthy man who as a candidate—much as Trump did during his initial campaign—says he is running against corruption, that he is not a traditional politician. He says in fact that he is here to defeat the corrupt political system that has dominated Colombia for decades. But like Trump he is very aggressive, he is openly misogynistic. He has said women have no place in politics, though his VP candidate is a woman. He has also said openly that he admires Hitler. He is a very powerful man who again, like Trump, can say and do anything with seeming impunity. And that message appeals to people here. Colombians are tired of corruption, both on the left and the right. There is a sense among some here that the country needs a strong man to fight the entrenched system, and at the same time a father figure who will fight for you personally.

And do you believe Hernández is the person to take on Colombia’s entrenched elite?

Hernandez represents himself as going against the traditional power brokers, but in reality, he is a continuation of that system, known here as “Uribismo” (in reference to former Colombian president and erstwhile kingmaker Alvaro Uribe). It is a network of powerful men linked to the mining and palm oil industries, to construction companies across the country. Hernández himself is a product of Uribismo, his wealth made possible by his connections to this network. So like Trump he is far from being an outsider… he is another kind of right wing leader, and for that reason those on the right will support him.

What does that mean for Petro’s election hopes?

Petro’s road ahead will be difficult. Groups that had supported the other center-right candidates in the first round have already come out in support of Hernández. That translates to millions of votes that will almost automatically go to Hernández. Then there are those who did not vote, which is somewhere around 14 million people. These are the ones Petro needs to reach to win in June. And he will need to negotiate with center-right groups to gain their support, something that is sure to ruffle his base.

There’s reportedly been an increase in Colombians arriving at the U.S.-Mexico border. What do you think is driving this?

Colombia has among the highest number of displaced people in the world, second only to Afghanistan. When I first came here 10 years ago, things were relatively safe. There was an atmosphere of hope with the anticipated signing of the 2016 Peace Accord (ending 50 years of civil war). I visited zones once dominated by paramilitary groups along the Pacific and Caribbean coasts. Today those zones are unreachable. Violence is again surging. The Peace Accord is all but dead, the outgoing administration having refused to implement it. Those who fled their communities in the 1980s and 90s — when the violence was at its peak — later returned when things calmed down. They are now fleeing again; their communities having been retaken by paramilitary groups working in conjunction with corporations or Mexican cartels seeking to profit from the land.

The Left appears to be making a resurgence across parts of Latin America. How does Colombia fit into that picture?

The Left represents the chance for change in Latin America. We have had many years of right-wing politicians linked to U.S. policy and, more often than not, they have left a legacy of poverty and violence. We know the Left is not perfect. It is not immune to corruption. But it offers something new, especially for minorities. I see this in Chile, in Bolivia… at least with left-leaning candidates, these communities are on the agenda. With candidates like Hernández, it is like they don’t even exist. It is impossible to see how someone who voices support for Hitler will work with Afro Colombian or Indigenous communities. It is like they are invisible.

How have minority groups in Colombia responded to the latest election outcome?

There is an Afro-Colombian lady that works as a cook in the hotel where I am staying. She seemed extremely happy the first couple of days I was here, before voting began. “Today is the day,” she said to me the morning polls opened. After the results had come in, I asked her how she felt. “I voted for Petro,” she replied in a very low voice, looking around to make sure no one could hear her. “Now I think he will lose, and I am very sad about that.”

Manuel Ortiz Escámez is the founder of Peninsula 360 and is in Bogotá, Colombia, where he is working with a team of Colombian reporters sponsored by Global Exchange.