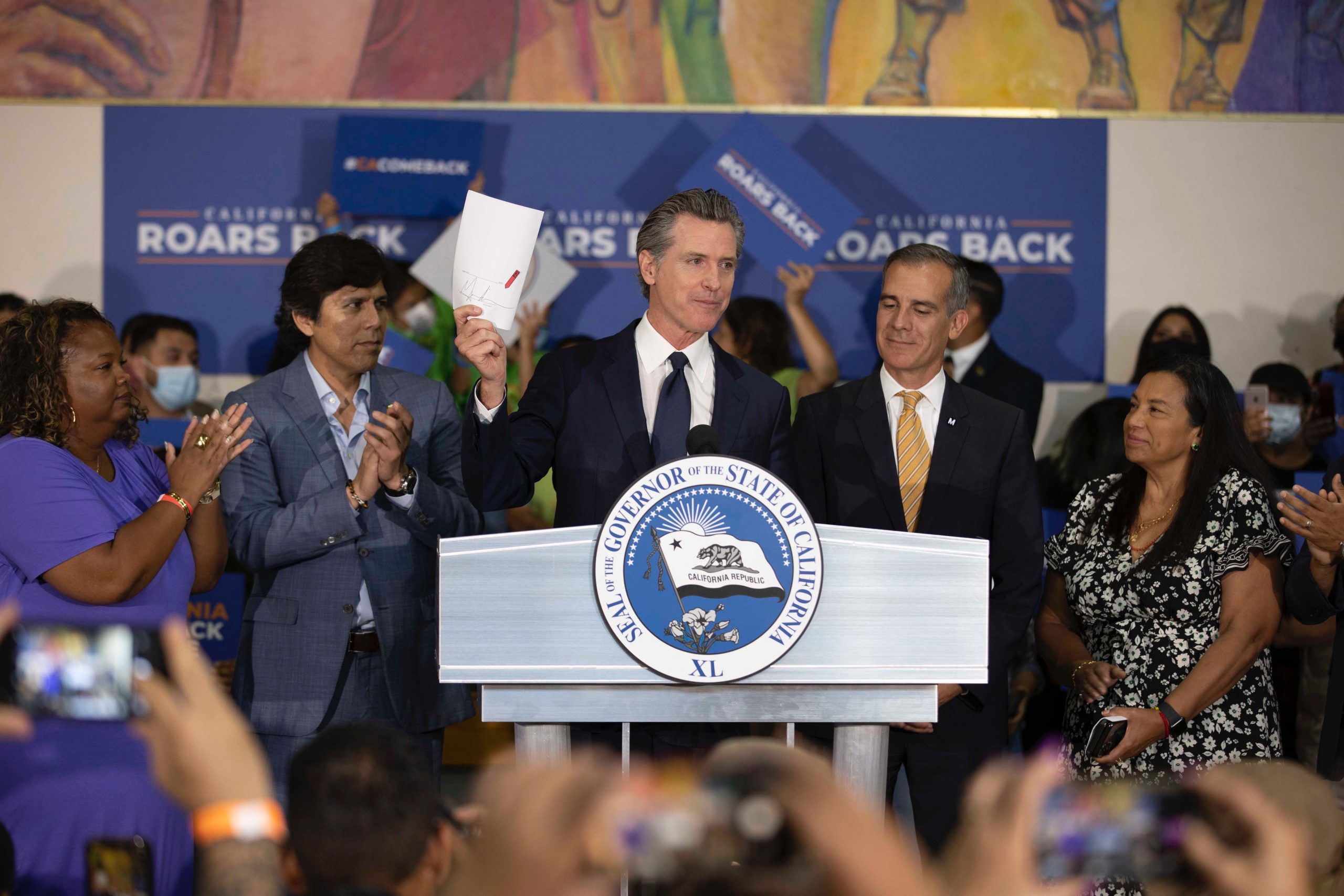 “This is historic and unprecedented. It is the outcome of many community-based organizations who ralled to get this support to find the best ways we can respond to violence against our community, and to prevent these attacks from occuring in the first place,” said Cynthia Choi, co executive director of Chinese for Affirmative Action.

“The AAPI community has historically been overlooked and underfunded. Imagine what we can do with resources,” she said, adding that the investment in the community must be ongoing, beyond the initial three-year commitment.

The API Equity Budget allocates $110 million to the California Department of Social Services, who will work with the Commission on Asian & Pacific Islander American Affairs to distribute funds directly to community-based organizations that provide services to help victims of hate crimes and help hate crime prevention services.

It allocates $10 million to the AAPI Data Project — housed at UC Riverside and helmed by Karthick Ramakrishnan — to improve data equity by conducting policy research and demographic data for the API community. The fund also allocates $10 million to an anti-bias block grant that provides funding to schools to create restorative justice programs, and safe spaces for students and staff to share their experiences with racialized hate and macroaggressions. Another $5 million will fund a peer social network for APIs to connect with and support each other through the use of social media.

CAA led an effort to mobilize 150 community-based organizations who rallied the state Legislature to get the budget measure passed. “Lawmakers have to move beyond platitudes,” said Choi.

The organizations worked with the Asian Pacific Islander Legislative Caucus of the California state Legislature to get the budget allocation in the $262 billion 2021-2022 budget. Governor Gavin Newsom signed the budget July 12.

Over the past 15 months, the AAPI community across the U.S. has been beset by an unprecedented wave of hate crime, which many community advocates blame on former President Donald Trump who targeted China for allegedly infecting the world with Covid. Trump repeatedly called coronavirus the “Chinese flu,” “Kung Flu,” and other racial epithets.

The online Web portal Stop AAPI Hate, which allows the AAPI community to self report incidents of hate-based violence, speech, or verbal harrassment, had logged 6,603 reports as of May. More than 12 percent of the incidents — which can be reported in one of several Asian languages — involved violence. Stop AAPI Hate will receive $10 million to continue its work.

Ramakrishnan, who also chairs the California Commission on APIA Affairs — which played a key role in getting the API Equity Budget passed — said there had been a community upswell throughout the past year for means to respond to the increased violence against the community. The movement escalated after the spa shootings March 16: 21-year-old Robert Aaron Long went to three massage parlors in the Atlanta, Georgia area, and killed eight people, including six Asian American women. Long told police that his actions were motivated by sexual temptation. AAPI organizations have called for the murders to be investigated as hate crimes.

Ramakrishnan said that, after the shootings, he spoke with California state Senator Richard Pan, who chairs the Asian Pacific Islander Legislative Caucus; Pan agreed to work on getting the budget allocation passed.

In a statement released after the passage of the budget, Pan, a Democrat who serves portions of Sacramento, said: “This sends a message to the API community that the State of California sees them and that we matter. It gives us hope that California will be supporting our survivors and communities as our state recovers from COVID-19.”

Assemblymember Phil Ting, a Democrat who represents San Francisco and chairs the Assembly Budget Committee, said in a statement: “For decades, API communities have been longing to be seen and heard. The pandemic amplified the need to do more amid rising hate against Asian Americans.”

“Every person has the right to shop, go to school and enjoy our neighborhoods safely without fear of being attacked. It is my hope that with this historic investment our communities feel safe once again,” said Ting.

The budget also allocates $10 million to ethnic media to improve outreach to API and other underserved California communities about grants and helpful services. Chinese for Affirmative Action notes that the money will be channelled through state agencies working with ethnic media outlets who have audiences of monolingual and underserved communities.

“This is an important opportunity to think about the future of ethnic media in California. Media serving communities of color are important in making sure that the stories of our communities are seen by the eyes of decision makers.”

Ramakrishnan characterized the investment in media as an important first step. “It opens up the conversation about what community supported media can look like while still maintaining independence.” He noted that this has been done on the federal level, with the Corporation for Public Broadcasting, which supports PBS and NPR. Several states have also created some version of a public broadcasting network.

Regina Wilson, executive director of California Black Media, lauded the grant to the ethnic press. “This is an exciting day: the state budget has recognized the importance of ethnic media and its important role in informing communities who really yearn to plead their own cause.”

“It earmarks resources to help get critical messaging into the communities that need it the most,” she said, adding: “CBM and our partner Ethnic Media Services — on behalf of an advisory group of ethnic media leaders — are inviting the Asian Pacific Islander Legislative Caucus and the Commission to a briefing with representatives of the sector to discuss how the $10 million allocation will be distributed. We want to ensure all media, no matter how small, benefit from this historic bill.”

Wilson said the murder of Minnesota resident George Floyd by a white police officer, Derek Chauvin, who has been sentenced to 22 and a half years in prison, alongside the Covid pandemic, has served as an inflection point for communities of color. “It has made us look at our humanity. We are neighbors who must stand up for one another.”