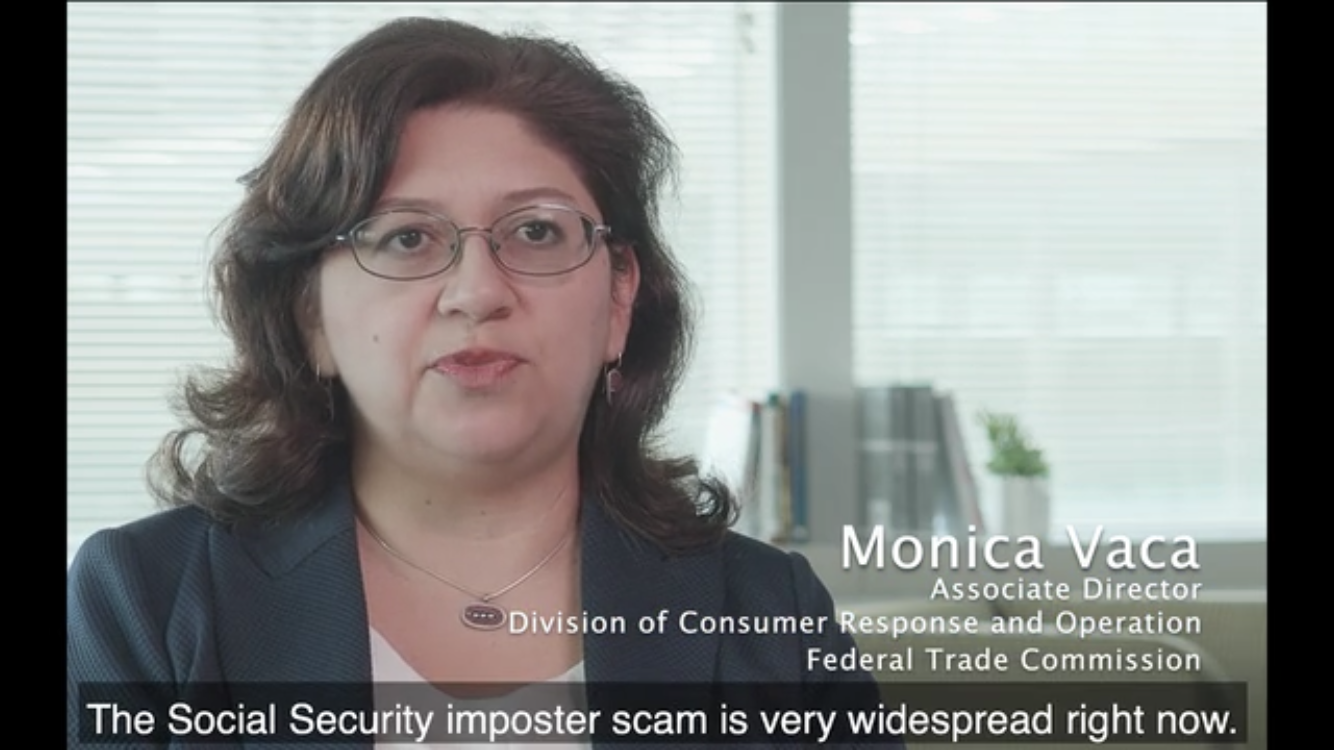 Monica Vaca, associate director of the Federal Trade Commission’s Consumer Sentinel Network, seen in one of many informative videos the agency posts at https://www.FTC.gov (https://www.ftc.gov/news-events/audio-video), warning of how various illegal scams in the United States cost victims almost $2 billion in 2019 and of steps people should take to avoid them. Image courtesy of the Federal Trade Commission

“Gift cards are for gifts, not payments,” and other helpful warnings

A veteran lawyer for the Federal Trade Commission briefed ethnic media reporters on 2019’s biggest frauds, what the agency is doing about them and some things everyone should know to protect themselves from becoming victims. Those frauds cost U.S. consumers $1.9 billion.

Monica Vaca, associate director of the FTC’s Consumer Sentinel Network, described the three most-common scams last year and urged people to report new cases to the agency. They should also be on the lookout for refund checks if they’re fortunate enough to be on the receiving end of some of the $232 million the agency has been able to recoup so far from 2019 crimes. If they get a check, cash it.

In every case, she said, people should not send gift cards to people they don’t know. Only use cards for real gifts, she repeatedly emphasized. If people have any doubts about something, tell at least one other person, and feel free to contact the FTC, too.

“The no. 1 piece of advice,” she said, “is that gift cards are for gifts, not payments.” If you are contacted and asked for one, she said, it’s “a huge red flag.” The agency also has found that “the best way to protect yourself and your community from losing money is to talk to even just one other person while the activity is in progress.”

Scams don’t discriminate in who they target. People from every age group and walk of life can become victims, and too often people’s fear of being embarrassed works against them.

Keeping your fears or experiences to yourself deprives others of information that could help them avoid a similar fate and enables criminals to victimize you more easily.

The FTC has seen that as word of a scam gets out, it becomes less lucrative for the criminals. Common scams eventually disappear as word get out, but, sadly, new ones continue to emerge, so it’s important to stay informed.

“Please talk about it,” Vaca said. The FTC has a “Pass It On” (https://tinyurl.com/FTCpassiton) campaign to encourage information sharing.

The FTC tries to keep people informed about the latest scams and anything newsworthy that it thinks people should know about. You can subscribe to updates from the FTC at: ftc.gov/subscribe.

In 2019, the most frequent scams were “impostor” cases — for instance, telephone calls from people claiming to work for the government who say they want to alert and help the would-be victim protect his or her Social Security account.

“It certainly has been a remarkable last few years,” she said. A few years ago, scam artists were often claiming they worked for the IRS and would threaten arrest or fines. But as word of that one got out, the criminals had to adjust. So now, the crooked callers say the would-be victim’s Social Security account has been linked with criminal activity.

“It’s been lucrative, because they continue to use it,” Vaca said. Besides claiming to be government representatives, scammers say they are from other government agencies, far-flung family and well-known businesses, for instance. Or they pose as computer technical support staff to trick you into disclosing personal information, bank account data, computer passwords and more. These scammers most frequently seek payment in gift cards, Vaca said.

No. 2 on the list of most-frequent frauds, she said, are “romance scams,” frequently emerging from online dating sites, in which the criminals befriend their targets online and soon begin pressuring them for financial help as a prerequisite to meeting. Pretexts include unforeseen medical or travel expenses. Such scams increased six-fold between 2015 and 2019.

“If someone starts asking you for money, cut them off,” Vaca said.

The third-most common scam involves checks sent in the mail. In these, Vaca said, the sender asks the recipient for a payment back of a portion of the amount sent in the check or to have it sent to a third party. Often the pretext for these checks is an income opportunity, such as becoming a personal shopper, and the most frequently victimized are people in their 20s — twice as often as people in their 30s or older.

Waiting for the check to appear to have cleared before sending out the requested payment isn’t good enough, she warned. The original check may not yet have bounced.

Ironically, the FTC is finding victims of scams the agency has successfully prosecuted do not always cash the checks it sends them. Part of it may be that people who haven’t filed a complaint aren’t expecting a payment.

“If you get a check from the FTC,” she said, “you should go cash it.” In the past decade, the FTC has issued more than a billion dollars in refunds, to millions of people.

For more information on refunds, go to: ftc.gov/refunds.

To file a complaint of suspected or actual fraud, use the FTC website ftc.gov/complaint or phone 877 FTC-HELP. That’s (877) 382-4357. Vaca said the agency can’t pursue every complaint it receives, but complaints help the FTC and thousands of law enforcement staff the agency works with across the country decide what to go after.

Vaca also recommends keeping track of gift cards you buy, with their receipts, because the scammers typically ask for the numbers from the cards. Also contact the card-issuers for help, although there’s no guarantee there.

The FTC hears from millions of people every year, she said.

“Fraud is theft. We all think scams happen to someone else,” Vaca concluded. “Having that preconception makes you all the more vulnerable.”