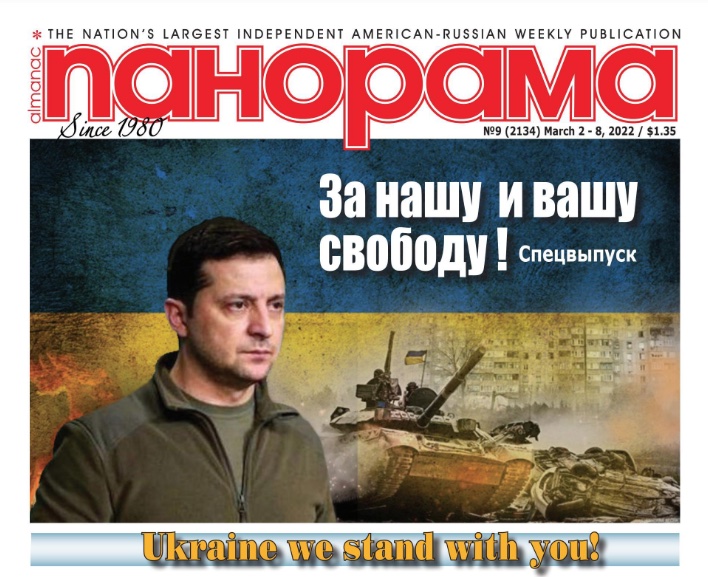 Ed. Note: Russia’s ongoing invasion of Ukraine, now entering its third week, has laid bare divisions in emigre Russian-speaking communities in the U.S., many of which are almost equally divided between Russians and Ukrainians. Some of the more than 1.2 million Russian-speaking immigrants here rely on Russian state programming for news, information and entertainment, a fact that Eugene Levin, publisher of two of the nation’s largest Russian-language weeklies based in Los Angeles, says allows for Russian state propaganda to influence perspectives on the war in Ukraine. Levin, who was born in Kiev and came to the U.S. more than three decades ago, says there is a critical distinction between Russian-language media based in the U.S. and Russian-state media, adding U.S. officials should act to close down the latter. He spoke with EMS Contributing Editor Peter Schurmann. (This interview has been edited for length and clarity.) Image: The front page of LA’s Russian-language weekly, Panorama.

Can you tell us about the two Russian-language weeklies you publish in Los Angeles?

I’ve run these papers for 22 years now. One is called Panorama, founded in 1980, and the other is Friday Express, published continuously since 1994. When I first arrived to the United States as a political refugee I worked as a journalist for Reuters News Agency. Later I worked in Russian-language radio and television, but I couldn’t compete with state-run channels from Russia. I am always clear that these are Russian-language, or Russian American papers, because some Russian outlets present only the official Russian government point of view. We have our own staff writers, our own contributors. Most of them are here in the U.S., or in Europe, in Russia. It’s a difficult business, but even during the Covid-19 pandemic I was able to get through without laying anyone off. We serve the Russian-speaking community, and again, I say Russian-speaking because people who immigrated here from the Soviet Union all speak Russian even if they are from different countries.

How have your papers responded to Russia’s invasion of Ukraine?

We used to feature Putin on our front page, with headlines like, “Evil Empire on the March.” After the invasion of Ukraine, I told my people to stop placing Putin on the cover. Let’s place the real hero, I said, and the real hero is Zelenskyy. I interviewed him once when he came to the U.S. as an actor. (Some leaders become comedians, and some comedians become leaders. And he is a leader.) The Panorama headline here reads, “For our and your freedom.” This expression was first proclaimed during the Soviet invasion of Czechoslovakia in 1968, when a small group of people went to Red Square in Moscow to protest for the freedom of Czhech people and the people of the Soviet Union. They were later imprisoned or sent to camps. Our upcoming Friday Express edition also has Zelenskyy on the cover, with the words “Leader of Ukraine — Servant of the people,” the last phrase also being the name of the political party that he is a part of. Both of these issues are dedicated to the events we are seeing unfold in Ukraine.

Many Russian speakers here get their news from Russian state media. How is that shaping their perspective on events in Ukraine?

I would like to ask you… let’s say if in 1943 or 1944, Americans here were only exposed to Goebbel’s message saying Germans are liberating Europe… and that whatever you are hearing about Jews is not true. What would have been the reaction of many Americans? This is what is happening with Russian media here. There are maybe 50 Russian channels. Some of them are cultural, some broadcast programs for children. But at least 10 or 12 are news and propaganda. And on Ukraine, the message is that it is being liberated from Nazis… And when people see Putin — and he is a very good speaker — when he explains that we have to do this or that, and it is day to day for years… Well, this should be stopped. In Russia, just using the word “war” to describe what is happening in Ukraine is punishable by up to 15 years in prison. My own papers have been banned in Russia for years now. But here in the U.S. we remain open to their propaganda.

20 years ago you wrote an op-ed in the L.A. Times about the closure of Radio Liberty, in which you said the people of the Soviet Union are “addicted to the breath of freedom.” Do you still think that’s true?

I still think it’s true, people want to know the truth, the same as here. But unfortunately, from day to day they are watching this Russian programming and it is affecting their minds.

What about religious leaders? Are there any voices of dissent that you are hearing?

I spoke with two rabbis here and I know that they support our position. But on social media I heard a speech from the chief rabbi of Ukraine, who was streaming from a synagogue in Kiev. And this chief rabbi… he is originally from St. Petersburg, and he speaks Russian very well. He described what he was seeing, the missile strike on the Holocaust memorial site of Babi Yar, where Nazis killed between 100 and 200 thousand Jews. (My brother’s wife lives near the site, and saw the second missile strike. She told me it was like the Russians were killing these people a second time.) What struck me is what this rabbi said, that he had been receiving calls from around the world, from Israel, from Germany, from the U.S. But no one from Russia.

You were quoted in a NYT article saying you are worried about the potential blowback on Russian speakers here who may be targeted? Have you heard of any specific incidents like this?

One of our close friend’s granddaughter is in a school in Thousand Oaks, and they told us that other kids there have been bullying her because she speaks Russian. I have heard similar stories from North Carolina and from other areas. She is 11 years old. Maybe in her family they speak Russian from time to time but she is American. I am an American. Yes, I am a proud American Citizen. Yes, my native language is Russian. Yes, I was born in Kiev. And all these yeses need to be combined to understand people’s positions. I want to stop this war, this aggression of Putin’s regime against a country that wants to live independently.

You were born in Kiev. Can you share some of your memories of that city?

My parents are from Kiev. My grandparents are from there. We lived in the city center. Kiev is more than 1500 years old with a population of around 3 million people. It is a city filled with unique architecture. There are so many parks, so many beautiful buildings. Yes, for centuries the city has seen many battles, with the Russian empire, the Ottoman Empire, with former Polish kingdoms. But Kiev is so beautiful. To see what did to Kharkiv and to other Ukrainian cities, to imagine that happening to Kiev. It would be like destroying Rome, or Madrid, or Paris. It is exactly the same. It is difficult for me to imagine this.

What do you anticipate in the coming days as Russian forces encircle the city? What are you most concerned about?

One of my concerns is that Putin and his regime will fabricate a provocation as a pretext for using tactical nuclear weapons. I don’t know if they will go that far, but they have shown that anything is possible. One of the biggest mistakes was when President Biden said in an address before the invasion that if it was just a small invasion, then we’ll see. What do you think? If someone invaded San Diego or Orange County, which is the the size of Luhansk or Donetsk, would that be big, or small?

As a Russian American journalist with ties to Ukrainia and to Russia, what has been the biggest challenge for you personally in covering this tragedy?

To tell the truth, to select and check the information we have, and to let our audience know what is happening. And this is difficult because people have such extreme positions on both sides.

Q&A: Covering San Francisco’s Chinese Community from the Heart of the Mission