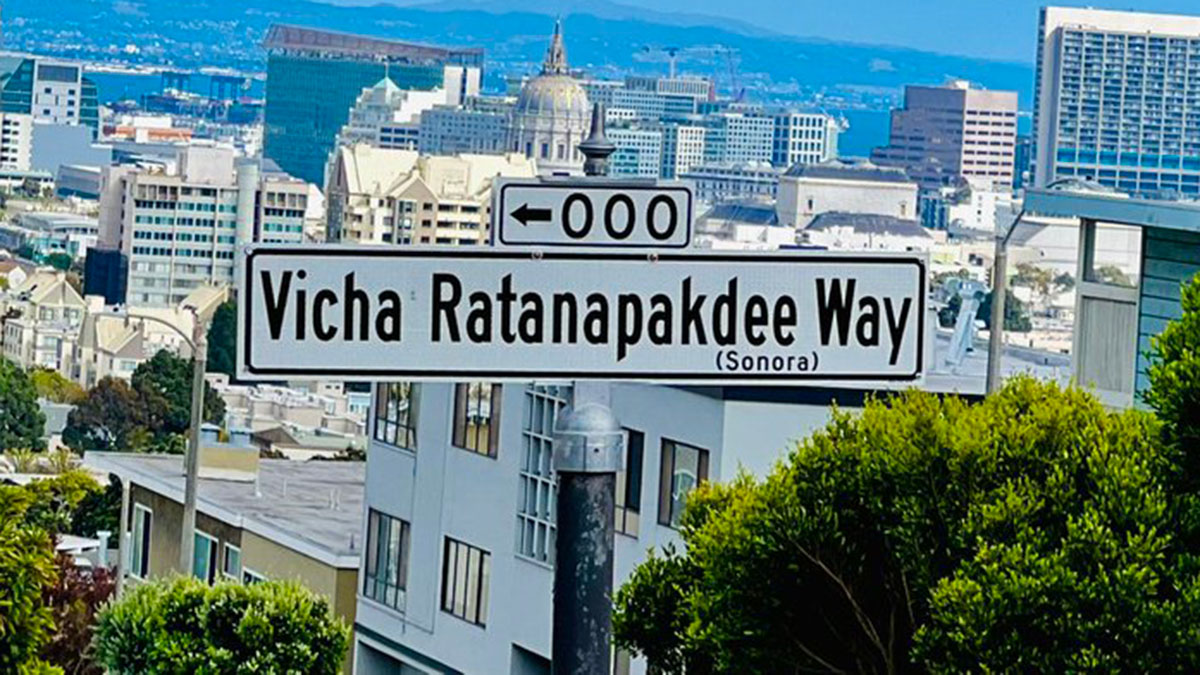 SAN FRANCISCO, California — Asian American advocates gathered in San Francisco Oct. 1 to commemorate the renaming of a street where Vicha Ratanapakdee, an elderly immigrant from Thailand, was killed in a brutal attack last year.

The attack marked the initial stirrings of what would become a national movement denouncing anti-Asian hate crimes.

“Grandpa Vicha was our grandpa. And every victim of anti-Asian violence is our grandfather, our grandmother, our father, our son,” said San Francisco City Attorney David Chiu during the commemoration ceremony.

The street — formerly known as Sonora Lane in the Anza Vista neighborhood — was renamed for the 84-year-old Ratanapakdee, who was attacked Jan. 28, 2021, allegedly by Antoine Watson, now 21. The suspect shoved Ratanapakdee to the ground. Witnesses say he then returned to take cellphone pictures as Ratanapakdee lay bleeding.

The victim was found on the ground by a neighbor who called 911. EMTs took Ratanapakdee to San Francisco General Hospital, but he never regained consciousness and died from a brain hemorrhage two days later.

His death has become a rallying cry to end hate against Asian Americans, Chiu told the crowd. “If you come after one of us, you come after all of us.”

Ratanapakdee would daily take an hour-long walk on the streets of his neighborhood. The son of a farmer, he was an auditor in Thailand before he immigrated to the US in 1989 with his wife and children.

Watson has been charged with assault with a deadly weapon, elder abuse and murder. Former San Francisco District Attorney Chesa Boudin did not add hate crime charges, despite pressure from Asian American community advocates. Boudin faced flak when he described Watson’s behavior as a “temper tantrum” in an interview with The New York Times.

The suspect is being held without bail in San Francisco County Jail. His next court appearance is Oct. 18. He has pleaded not guilty to all charges.

Hate crimes and incidents against the AAPI community have risen dramatically since 2020, when former president Donald Trump unleashed xenophobic rhetoric, blaming Chinese people for creating the Covid-19 pandemic. The web portal Stop AAPI Hate — which allows victims of hate crimes and incidents to self-report in multiple languages — has recorded more than 11,500 incidents between March 2020 and March 2022. Elderly people and women are the most frequent targets for attacks, according to the organization.

“We will never forget that day,” said actor Daniel Dae Kim at the street renaming ceremony. He recalled weeping while watching a video of the brutal attack on “Grandpa Vicha.”

“It was such brazen callousness and animalistic violence against an elderly man, a grandfather,” said Kim, who most recently appeared in the science fiction thriller “Stowaway.”

“This street serves as a powerful reminder that we will not be overlooked. And we will not just stand by as one of our most vulnerable is attacked,” said Kim. “We have found our voices, voices that many of us had never previously used.”

Monthanus Ratanapakdee, Vicha’s daughter, paid tribute to the community. “We are so grateful to have your support.”

“My father was killed here as he took his daily walk. We dedicate this street to him, so that his death is not in vain,” she said to the crowd, many of whom wore sky-blue t-shirts proclaiming “justice4vicha.”

“My mother used to walk this street as well, often with my son. But after my father died, she never walked this street again,” said Ratanapakdee, adding that her mother is now scared to leave her home. “No one should have to fear walking in the street in their own neighborhood.”

Ratanapakdee addressed her late father. “You see us from heaven and your love guides us.”

Vicha’s daughter concluded her remarks with optimism. “Today, I see the younger generation speaking out for Asian American equality. It gives me hope.”

David Chiu addressed his remarks to Monthanus Ratanapakdee. “My heart goes out to you. I can only imagine how exhausting this must be.”

“I feel Grandpa Vicha is with us today. And until we see you again in the next life, we will keep fighting for you,” he said.

Vanita Louie, a long-time Chinatown advocate who was recently appointed to the San Francisco Parks and Recreation Commission, noted that it generally takes a long time for the City to act, but the street renaming took relatively little time. A unanimous vote was taken by the San Francisco Board of Supervisors on Oct. 29, 2021.

“Vicha called Anza Vista his home. No family should have to live in fear of hate or look over our shoulder in the middle of the day,” said Louie. “This is our home. And justice is what Vicha deserves.”

Covid Vaccines are Safe and Effective for 5-11 Year Olds

Exodus Lending: An Escape Route for Victims of Predatory Loans