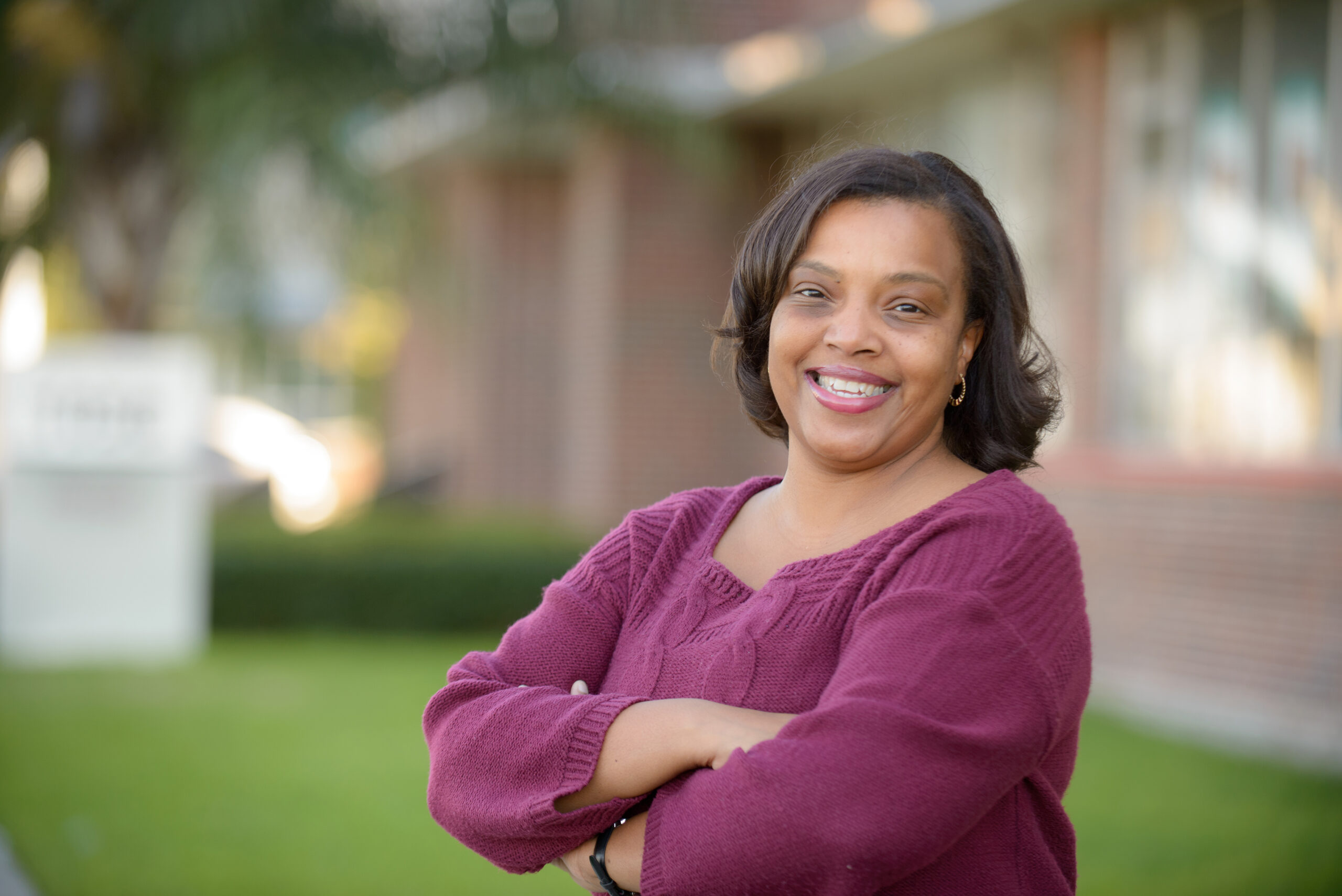 Editor’s Note: This is the first in a series of EMS profiles of redistricting champions.

Andreanecia Morris’ passion for housing has made her one of New Orleans’ most ardent advocates of redistricting.

It seems a stretch – redistricting is that once-in -a-decade process when states, counties and cities get to redraw district lines that determine where people vote. But ultimately, Morris argues, redistricting is about whether your vote counts and that in turn determines where you live and even whether you get a place to call home.

“Housing,” Morris says, “is the issue of our time. Without it, redistricting is often a rigged outcome.”

Morris runs HousingNOLA, which she helped found in 2014 to improve housing conditions and expand the quantity of affordable housing in the city.

She also serves on the board of the National Community Reinvestment Coalition. She has spent decades as an activist building collaborations to promote housing with government agencies and community advocates.

“When people talk about civic engagement, they often say, ‘I want to talk about getting people to vote,’ and I’m like, ‘what’s the first thing you need to vote? An ID? No, no. You need an address.’ Where you live determines who you vote for.” And, she adds, it often determines whether you vote.

“You’re sitting there talking about getting low- to moderate- income, mostly African Americans to vote, and they can’t pay their rent. They can’t pay the light bill or may soon be foreclosed on. And you think you showing up at the door to register them to vote will fly? Not unless and until you talk to them about how you will fix those problems.

“I can show you how the failure to build properly functioning housing systems is at the root cause for all other issues—racial equity, economic disparity, police violence, sexism, you name it. You can’t address any of them without addressing housing,” Morris says.

Morris’ zeal was ignited when she first saw the dilapidated state of New Orleans’ public housing properties, so at odds with her childhood memories of family shopping tours from her hometown of Edgard to Canal Street. She was working for the public housing agency fresh out of college. “My immediate reference point was Beirut – the televised images I’d seen in the 1980s of bombed-out buildings during Lebanon’s civil war. We had verdant green grass, but that was the only difference between our large buildings and the ones in Beirut. I was appalled the government of the United States had done this to Americans.”

More troubling, she says, was that “everyone just went along with it.” Even after the devastation of Hurricane Katrina in 2005, neglect was the status quo in her opinion. She became consumed in figuring out the policies and politics in play. “The way my mind works, I want to understand why things are broken, and I like fixing stuff.” 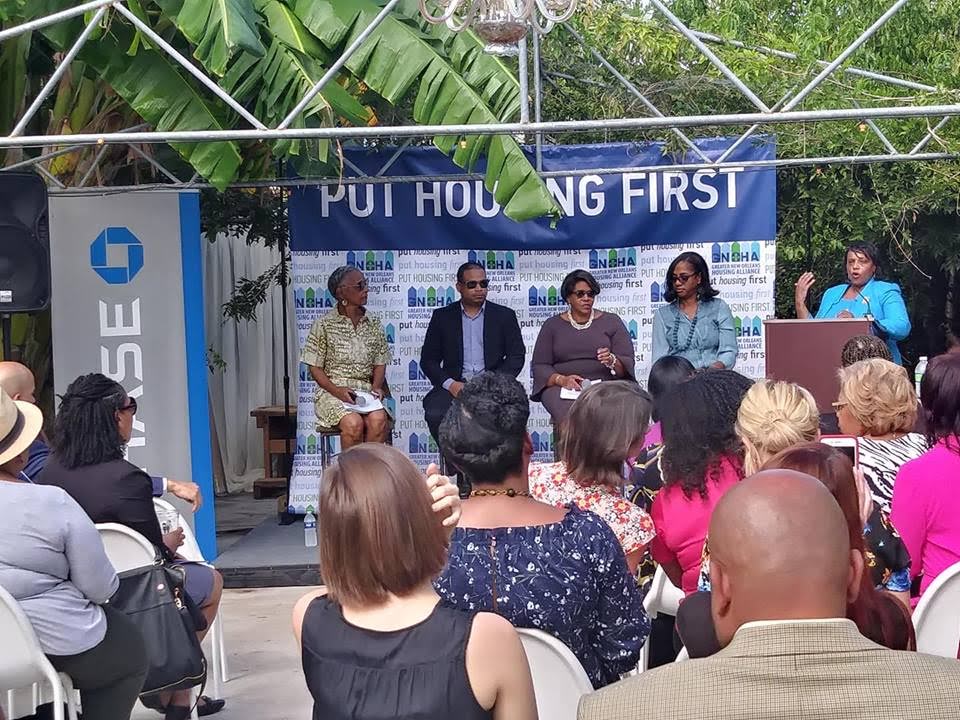 Morris at a public forum on housing

“The burning question,” Morris realized, “was how the informal network of power brokers and shot callers who ultimately direct the city’s politics and decisions regard people of African descent,” who comprise 60% of the city’s population.

That number itself has a complicated past. “New Orleans is not Detroit or Chicago, where African Americans formed a majority only after the Great Migration. For a good chunk of New Orleans’ history, the city wasn’t even part of America. It was under French and Spanish rule. So we would not have been African Americans. We would have been enslaved Africans or enslaved black people or even free people of color.”

Not lost on the establishment, Morris argues, is that African Americans are essential to the city’s economic engine. “What powers the city now is tourism and what it means to be in New Orleans. People come here, unlike people who go to see New York, or Los Angeles, or Houston, to be with New Orleanians which means they come here to be among us, to hang out with us, to be fed by us, even to be offended by us…Black people are key to the notion of New Orleans.

“It’s not that the largely White establishment doesn’t want Black people here. They need and want us here. They just don’t want us in charge.”

Which brings her to redistricting. Housing was the issue Morris used to persuade New Orleans’ residents to participate in the 2020 Census. Housing is the issue to explain the high stakes of redistricting. Both drive the allocation of resources to neighborhoods.

How lines are drawn will determine whether communities have enough numbers to organize around shared issues like housing, and whether residents can elect advocates of their choice. Voices are lost when communities are split and fused into districts where opposing groups hold the majority.

New Orleans has not regained its pre-Katrina number but the state’s population has grown. Louisiana retained its six member House delegation. Drawing district boundaries is contentious. In Louisiana, like most states, the task falls to the state legislature. Republicans control both houses and Donald Trump carried the state in 2020, but Louisiana elected a Democrat as governor. That office has the power to veto the legislature’s proposed maps.

Line drawing begins in earnest in September, with further release of Census data. Legislators know voters are drawing maps of their own and preparing to seek remedy in the courts if the legislative line drawing racially discriminates or otherwise violates federal law.

Morris is determined to pressure city residents to hold all elected officials accountable, regardless of political affiliation. She wants to restore the wrap-around services public housing tenants once enjoyed, services that often enabled tenants to transition to independence. Those services began to be stripped in the Reagan years with the propaganda assault on “welfare queens.”

“There are very few people who talk about the history and politics of housing,” Morris says. “As housing advocates, we want to educate and activate apathetic voters and to get all voters to understand that redistricting plays a huge role in their lives.”

“How do you make sure you’re not being accidentally counted as only three-fifths of a person because of how the district lines are drawn? What does community mean when its people, that person, that family, that household loses the ability to represent themselves? We don’t seem to get that connection.”

Until people do, the images of Beirut will continue to haunt Morris’ vision of the city’s future.