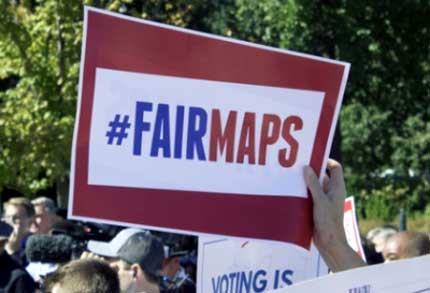 North Carolina’s population surge since 2010, driven by communities of color and documented in the 2020 census, earns the state one more seat in congress, its fourteenth. New maps must be drawn for all districts, noted Dr. Rebecca Tippett, Director, Carolina Demography, in order to meet federal law that districts are proportionate in population.

The shape of the districts and which communities are included in each will be determined by the state legislature, presumably with input from public hearings. North Carolina’s coalition of ethnic and minority redistricting advocates dread the probable outcome, given the Republican- dominated legislature’s map-drawing practices of the past.

Those practices, advocates charge, have yielded inequitable allocations of resources to its non-White residents across every metric of daily life, from education and housing to health care and transportation.

“In understanding the power dynamic in our state, the power rests with the legislature,” explained Kyle Hamilton Brazile, Director of Civic Engagement, NC Counts Coalition, who joined Tippett and other presenters at an online news briefing organized by Ethnic Media Services.

“North Carolina gives full authority to the legislature to draw congressional lines and draw state legislative lines. There is no independent commission that has authority here, and the governor [by law, regardless of party] has no veto power.”

“Over the last decade, there have been many, many challenges to the maps drawn by the legislature,” Brazile said. “Courts have ruled in North Carolina in the past that not only were maps racially gerrymandered, but they were done with ‘surgical precision.’”

Brazile cited the convoluted drawing of the 12th district, “which stretched all the way from Mecklenburg County to near Durham. It was a district that was 64 percent African-American majority in population and it was so narrow at some points that it was no wider than a highway lane.”

Robert Dawkins, a Charlotte-based community organizer and political director of Action NC, describes the intent of North Carolina’s legislature as “oppression and suppression.” Dawkins is incensed that the legislature exercises preemption over changes that counties and cities desire to implement on behalf of their constituents.

“What preemption means is that if powers are not included in your county or your city charter, you have to ask the general assembly permission to change it, or the general assembly can just deny you the right to do it. And that’s something that we’re really worried about here in Mecklenburg County.”

While North Carolina has historically used redistricting to limit the voting power of African Americans, the 2020 census shows a rapidly changing state through the growth of other ethnic groups — but ones no less susceptible to legislative fiat.

The state has added 900,000 residents, up 9.5% from its 2010 census count. With its current population over 10.4 million, each of the now 14 congressional districts should contain approximately 745, 671 residents, according to Tippett’s calculations. “But we don’t know where the 14th district is going to go,” she added, “and we also don’t know the specific boundaries of those districts that will need to be redrawn.”

North Carolina’s population increase is not uniformly distributed. Some areas have lost population and 74 of the state’s 100 counties have experienced a decline in child populations. “As of today, we’re 60% White, 20% Black, 11% Latinx, 3% Asian and 6% all other race groups, including American Indian, other race, and multiracial.” With the exception of the Native American population, “virtually all racial ethnic groups grew over the decade,” Tippett said, “but the largest numeric increase is Hispanic which grew by almost 320,000.”

Ivan Almonte, Founder and Director of Rapid Response in Durham, described the struggle to assist families suffering financially from the detention of an undocumented family member, raising money to pay bonds or to replace the wages lost due to the deportation of a loved one who was a wage earner. He said Covid-19 also has taken a toll as employment lay-offs roil the already fragile income insecurity of households who often face eviction as a consequence.

Almonte described the current state legislature’s attitude toward the Latinx community as hostile, pointing to the scheduling of public redistricting hearings at hours inconvenient for the employed or at places virtually inaccessible by public transportation.

Brazile concurred. “Under the current plan, there will only be 13 hearing sites throughout the state, a state with 100 counties. By comparison, in 2011 the North Carolina legislature held public hearings at 63 sites across the state.”

Another barrier for participation in redistricting forums is insufficient language access to information, especially for the fastest growing racial group in the state, Asian Americans.

Chavi Khanna Koneru, Executive Director of North Carolina Asian Americans Together (NCAAT), a pan-Asian social justice organization based in Raleigh, said that “language access has been an issue not just in terms of voting but in terms of accessing any other resources in North Carolina.”

“This community is not a monolith,” Koneru said, noting that the pandemic has hit certain groups more significantly than others. “The PhilippineX Community has experienced a higher number of Covid deaths, Bangladeshis have lost more jobs, and Southeast Asian refugee communities… have experienced high rates of food insecurity. And we all know that the East Asian community has been particularly hard hit by Covid-related hate and discrimination incidents.”

Koneru stressed the need for the legislators tasked with redistricting to listen and understand the needs of North Carolinians of all backgrounds and across socio-economic status, a sentiment shared by Keisha Dobie, a CROWD fellow with the Pasquotank branch of the NAACP.

Dobie described a predominantly African American community in the northeast region near Virginia, referred to as North Carolina’s Black Belt, where a declining, aging populace has become norm. “We are just bereft of resources that other areas might have in abundance…Ride through streets and neighborhoods and see the number of homes that are for sale; see the number of businesses that are trying to hire; look at the decrease in just the population as a whole.”

A teacher for over 20 years, Dobie said lack of broadband access in the region meant students couldn’t participate in remote learning for over a year.

“It really makes you concerned when the next redistricting process comes up, because you’re wondering, will our northeast region be reflected as far as the needs? Will we receive resources that are necessary to help those that are still here?”

The coalition’s aim is to get maps drawn that can deliver a fair share, for example, of the $44 billion — based on the 2010 census — that was delivered to North Carolina in 2017. “Racial gerrymandering is illegal for a reason,” said Brazile. “It hurts the voters, the people, the institutions of the state.”