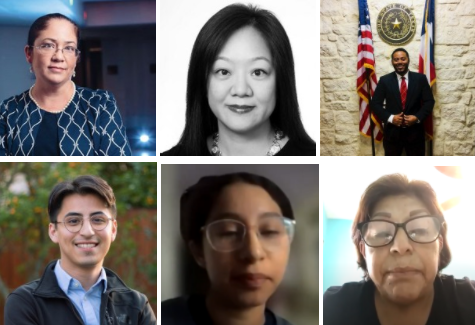 Every time Myrtala Tristan recounts her experiences during devastating Hurricane Harvey, she relives the scenes of relentless rain that turned her neighborhood’s streets into rivers, and her home into a floating furniture museum.

“They never told us that we would have to evacuate or that it was going to be so terrible,” Tristan, a resident of Houston’s Lakewood suburb for nearly 40 years, recalled at a June 30 briefing on redistricting. “I live with my husband. For five hours I was calling (emergency) 311 and they never answered. We were up all night.”

Early the next morning Tristan left her house with just her driver’s license and some money, packed in a ziploc bag. Outside, a boat was rescuing people from the fetid waters, prioritizing children and senior citizens.

“We were navigating those dirty waters all day. They didn’t give us water or food … I think this is very unfair and that the government should be helping us in a different way,” said Tristan. Almost three years later, “we are still applying for some help. Nothing ever came.”

Tristan joined the Northeast Action Collective, a group of advocates and neighbors that emerged in response to the lack of public investment in drainage and flood mitigation in her community. “It is time for our voices to be heard.”

Right now, Tristan is focusing on a county-wide effort to engage communities of color and low income neighborhoods in redistricting – a process of redrawing political boundaries that determine what candidates people vote for.

“Redistricting is about drawing lines on a map to represent who is going to vote for certain elected officials,” explained Nina Perales, vice president of litigation for the Mexican-American Legal Defense and Education Fund (MALDEF). “It is a very political act to create groups of voters, so it is very important to get involved.”

Neighborhoods are grouped into districts that are redrawn every 10 years based on census data. Depending on what the electoral district is, those lines are drawn by the city council, the school district board of trustees, county commissioners, and ultimately the state chamber.

In places like Pasadena, a suburb in Harris County, these lines have effectively segregated the Latino from the Anglo population: Latinos live in the northern area that has historically received fewer services than the southern area – where Anglos live – making it more prone to floods and natural disasters.

When the Texas House of Representatives drew other lines within the northern zone that further divided the Latino vote, MALDEF filed a lawsuit and won, regrouping them in District 144 .

“The representative of that district, who was Anglo and conservative, lost his election. And he was replaced by a progressive Latina woman in the House of Representatives,” Perales said. “Our increased political participation is strongest when the political lines that are drawn around our neighborhoods are fair.”

For Miguel Rivera, the Redistricting Outreach Fellow at the Texas Civil Rights Project (TCRP), one of the challenges is that the Hispanic community is still not familiar with these processes, starting with terms such as “gerrymandering” and “redistricting” that are difficult to translate.

“I first came upon this conundrum when trying to explain to my parents, who were both born in rural Mexico, what I did for a living,” Rivera said. “They understood the fight for voting rights which had a lot of translatable terms, but their understanding of the census and redistricting was very different based on what they knew in Mexico versus in the U.S.”

Now the TCRP is doing educational campaigns for the Hispanic community to coalesce behind a specific term: redistribution.

Cassandra Martinez, who just graduated from high school and will attend Columbia University in the fall, first heard the term in census workshops organized by Mi Familia Vota.

“Hispanics don’t know the specifics behind redistricting and census counting, but the community cares about income inequality, about the schools children go to, about the construction projects that never quite get done,” Martinez said.

“A lot of us come from immigrant households; our parents…feel disconnected from politics,” she added. “There is this whole mentality of ‘my vote doesn’t matter.’ What really helps people in my age group is connecting voting with the future of our families and communities.”

Deborah Chen, an attorney and activist with OCA-Greater Houston, relates a similar experience with Asian Americans and Pacific Islanders whose numbers are growing faster than Latinos in Texas. She said her organization knocked on more than 221,000 doors to make sure AAPIs were counted in the census. “You don’t have to be a citizen or registered voter to participate in redistricting,” she emphasized.

OCA uses “opportunity maps” to demonstrate how majorities and minorities in those districts receive services such as sewers, electricity, pavements, pipes, and so on.

“Everyone who got counted in neighborhoods in the greater Houston area is worth $15,700 in federal money, and districts determine how that money is spent,” Chen said. “You want to live where multiple communities are evenly balanced and they have an even chance of having
representation.”

African-Americans also have suffered discrimination in how lines have been drawn mainly by Republicans in power, and for this reason organizations such as Pure Justice promote their participation in electoral map drawing.

“Everybody wants to crop the map out in a certain fashion for certain beneficiaries,” said Roshawn Evans, co-founder of this organization. “At the top of the political food chain, Republicans are on everything, but we still can make suggestive maps and draw them ourselves.”

“We want to keep together people who have the same kinds of problems, so I just want to emphasize that voting really matters,” he concluded.