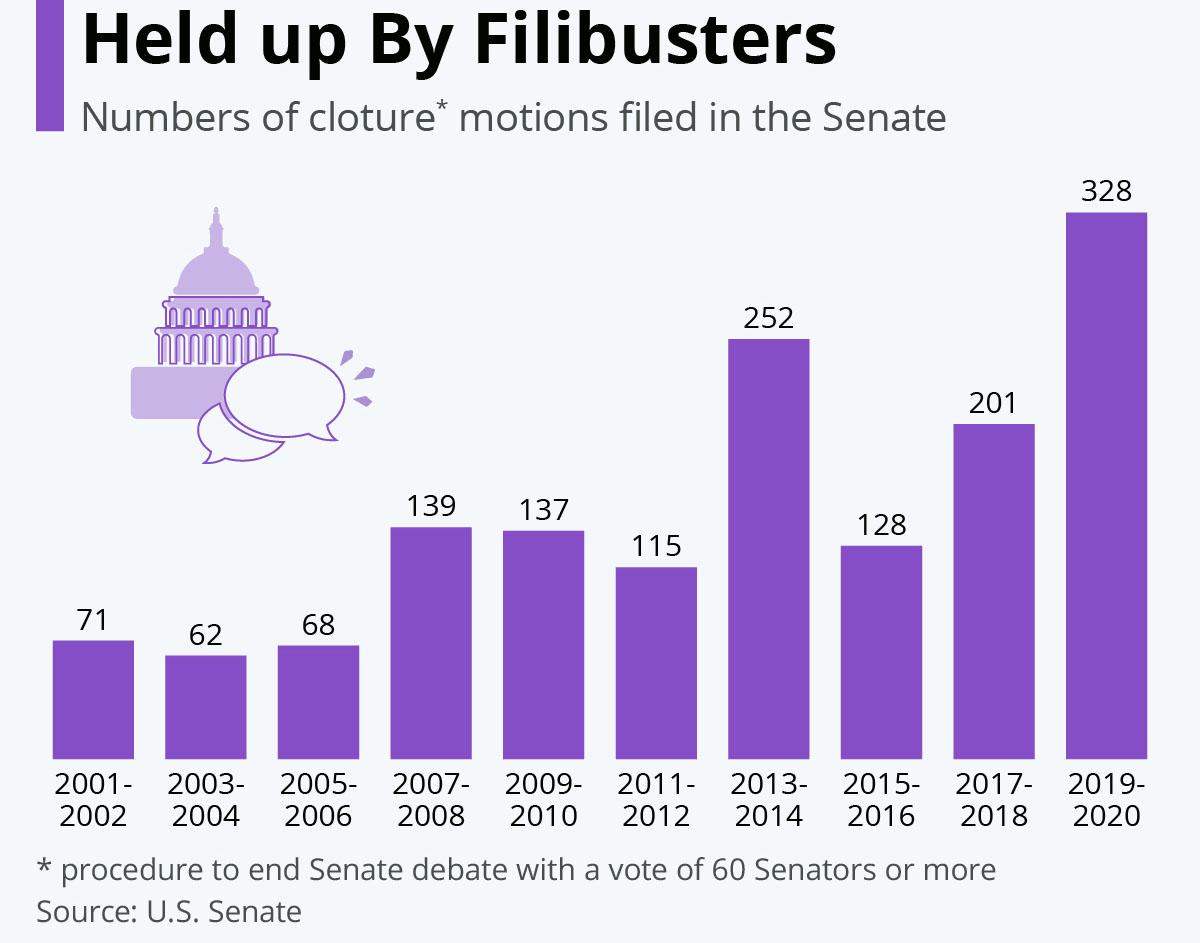 On a day when Republicans in the U.S. Senate again used filibuster rules to stop voting rights legislation, civil rights leaders said it’s time to change that antiquated process that allows a minority of legislators to derail reform efforts.

At a press briefing organized by the Leadership Conference on Civil and Human Rights, the organization’s CEO, Wade Henderson, and others called on President Biden, legislators of both major parties, and voters to step up efforts to protect and restore voting rights in the United States.

“Democracy is having a moment,” Sherrilyn Ifill, of the NAACP Legal Defense and Educational Fund, said. “Today, it failed the test.”

Their Nov. 3 statements came within an hour of the U.S. Senate failing to muster the 60 votes needed to overcome a GOP filibuster and begin discussing the proposed John Lewis Voting Rights Advancement Act.

The Lewis act had previously cleared the House of Representatives on a 219-212 party-line vote. The Nov. 3 vote in the Senate was only about discussing the bill – not enacting it, just debating it.

Two weeks earlier, the bipartisan Freedom to Vote Act that West Virginia Democrat Sen. John Manchin had drafted as an alternative to the House-passed For the People Act met a similar fate. For all Manchin’s talk of crafting a bill more likely to get Republicans support, on Oct. 20, every Republican senator voted against bringing the measure to the floor for discussion.

“Folks, something has gone terribly wrong in our democracy,” said Wade Henderson, CEO of the Leadership Conference on Civil and Human Rights. “The evidence could not be clearer.”

“The fact that Republicans refuse to even engage in discussion signals that Senator Manchin’s efforts to build bipartisanship is nothing more than wishful thinking, even if it is a worthy aspiration,” Henderson said.

In 2006, the Senate voted unanimously, 98-0, to extend the 1965 Voting Rights Act. Among those 98 were 13 current senators, including Republicans Lindsey Graham of South Carolina, John Cornyn of Texas, Mitch McConnell of Kentucky, and Chuck Grassley of Iowa, Henderson pointed out.

But since then, the Supreme Court’s 2013 decision in Shelby County (AL) v. Holder, in particular, and this year’s Brnovich v. DNC decision also, have radically changed the landscape.

Pre-Shelby, the Voting Rights Act stipulated that states’ proposed changes to voting rules needed federal “preclearance” from the Justice Department before they could take effect.

“That allowed us to get at voting discrimination before it happened,” Ifill said. It “stopped from going into effect provisions that would have disenfranchised black voters, Latino voters, Asian American voters, Native American voters for the entire life of the Voting Rights Act until 2013.”

The Roberts Court ruled in Shelby that discriminatory voting restrictions had diminished since 1965 to the point that preclearance was no longer necessary, and that Section 2 of the Voting Rights Act was enough to stop unjust new voting rules.

“Black and brown voters have been paying the price ever since,” Ifill said.

Then, in July’s Brnovic v. DNC decision, the court ruled that changes to benefit one party or another were permissible under Section 2, as long as they discriminated along political lines, instead of racial ones.

Since then, Henderson said, between January and September this year, there have been 33 laws passed in 19 states that restrict our freedom to vote and lawmakers in 49 states have introduced 425 measures with anti-voting provisions.

State lawmakers have passed restrictions to bar people from getting food and water while standing in a line to vote, initiated sham reviews of well-run elections, and created conditions whereby election workers feel unsafe doing their jobs over “the astonishing rise of violent threats targeting these workers and their families.”

“This is utterly shameful. Make no mistake, these emerging threats are ultimately about denying black brown and native people, people with disabilities, young people and new Americans their freedom to vote,” he said.

The Shelby decision, Henderson said, included a call for Congress to update the law as needed, based on current conditions in voting. To that point, the Leadership Conference has prepared 13 reports documenting “pervasive and pernicious racial discrimination in voting”.

The proposed Lewis Act, Ifill said, targeted “known practices” that result in voter disenfranchisement, such as “changing the method of voting from district elections to at-large elections, changing jurisdictional boundaries, changing the documentation or qualification required to vote, changing in multilingual voting materials.”

Besides restoring the pre-clearance aspect of the Voting Rights Act, It would also provide Congress’ guidance on Section 2, address voting changes made close to elections and establish sanctions against threats against election workers and more.

“This is a democracy bill. Healthy democracies want their electorate to vote and participate in the political process. The patron saint of the Republican party, President Ronald Reagan, when he signed the reauthorization of the Voting Rights Act in 1982 said the following:

“For this nation to remain true to its principles we cannot allow any American’s vote to be denied, diluted or defiled. The right to vote is the crown jewel of American liberties.”

“Today,” Ifill said, “48 senators turned their back on the crown jewel of American liberties. This is a threat to our democracy and it cannot stand. And that means that now the Senate must confront what stands in the way of the passage of this bill and the Freedom to Vote Act, and that is the filibuster.”

“No Senate rule, particularly a Senate rule with a history of interfering with civil rights legislation that would have protected Black Americans dating back to the late 1800s, should stand in the way of the ability today of black and brown and Asian American and Native American people to exercise full citizenship by participating equally in the political process.”

“The filibuster must be confronted, it must be overcome and we must have the John Lewis Voting Rights Advancement Act.”