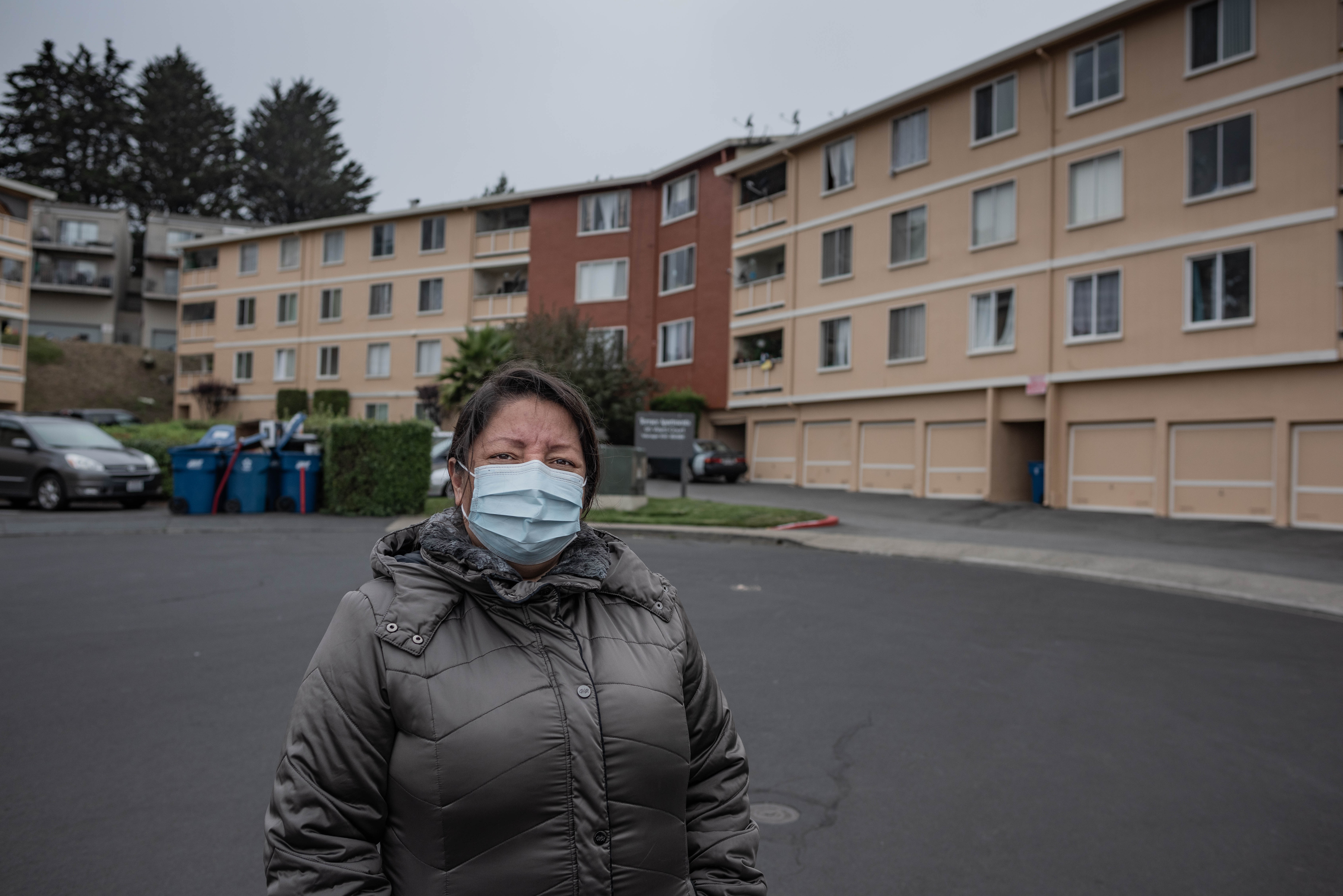 Isabel Perez, along with her husband and ten-year-old son, will be left on the streets if the moratorium on evictions is not extended.

REDWOOD CITY, CA – Isabel Perez and her husband each lost two jobs in San Francisco restaurants due to the COVID19 pandemic. They owe three months of rent and, if the moratorium on evictions ending on Aug. 30 in San Mateo County is not extended, they will be left on the streets along with their ten-year-old son.

About 6,900 people in the wealthy enclave along the San Francisco Peninsula are in danger of losing their homes at the end of this month. On Aug. 21, approximately 100 people, including tenants and activists, demonstrated in the courtyard of San Mateo Center, located in Redwood City, to ask San Mateo County supervisors for an extension to the moratorium on evictions. 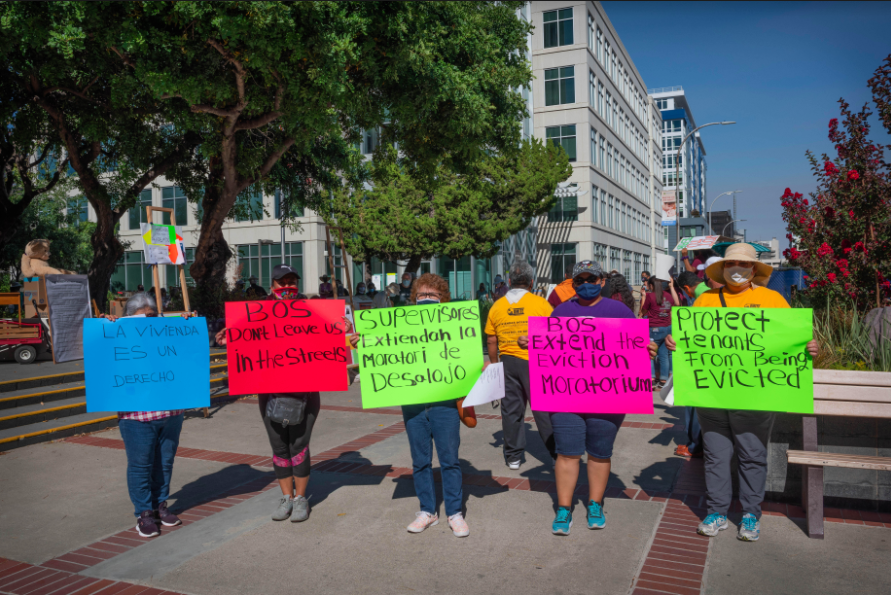 Nazanin Salehi, a staff attorney for the Housing Program at Community Legal Services in East Palo Alto, said people of color are disproportionately facing eviction in San Mateo County. More than 4,100 households with children are facing eviction, she said, adding that kids will also lose their schools once evicted as San Mateo County schools are primarily engaged in distance learning during the pandemic.

Salehi and local rent activists are advocating for a model in which San Mateo County pays up to 75 percent of a tenant’s debt directly to the landlord, to avoid eviction. On Aug. 4, at their last official meeting, San Mateo County supervisors denied an extension to the current moratorium on evictions that began on March 25 and ends on August 30 of this year.

“Our supervisors have decided that it is more important for homeowners to continue to earn money and evict workers from their homes than for families to remain in safe homes,” said Jason Tarricone, housing program director for East Palo Alto Community Legal Services, one of the organizers of the protest.

But the timeline for action is short: the Legislature adjourns on Aug. 31.

AB 1436, which has been winding its way through the state Assembly, would offer relief from eviction to the state’s renters. According to the provisions of the bill, landlords can use several methods to extract owed rent from their tenants, but cannot evict them.

AB 1436 encourages landlords and tenants to work out a system for past-due rent, without charges for late fees. It also mandates the removal of negative consequences, such as notice of eviction appearing on a tenant’s credit report.

Nisha Vyas, senior attorney at the Western Center on Law and Poverty, said it is crucial that the state Legislature passes the bill before the session ends Aug. 31. “The housing crisis in California was ongoing well before the pandemic.”

“We are facing a momentous societal shift. We need to put the brakes on this now,” she said.

Jennifer Kwart, communications director for Assemblymember David Chiu, chief sponsor of AB 1436, said the bill is stuck in the Senate Rules Committee, a placeholder as tenant advocates and landlords make their case for a better version of the bill.

“Landlords vehemently oppose the bill. Tenants would like to see it go further,” said Kwart, expressing optimism that a version of the bill will pass before the Legislature adjourns.

It’s pretty clear that something needs to get done. We told people to stay home, and businesses to close down. Millions of people lost their jobs and cannot pay rent through no fault of their own.”

“The consequence of evicting so many people will have a profound impact,” said Kwart, citing an alarming increase in the number of homeless people, the increased spread of COVID, and an overall dampening of the California economy.

“This could be catastrophic to our state,” she said.

“What we are experiencing is serious, very unfair and worrying,” said Adriana Guzman, a San Mateo County activist, in an interview with EMS. 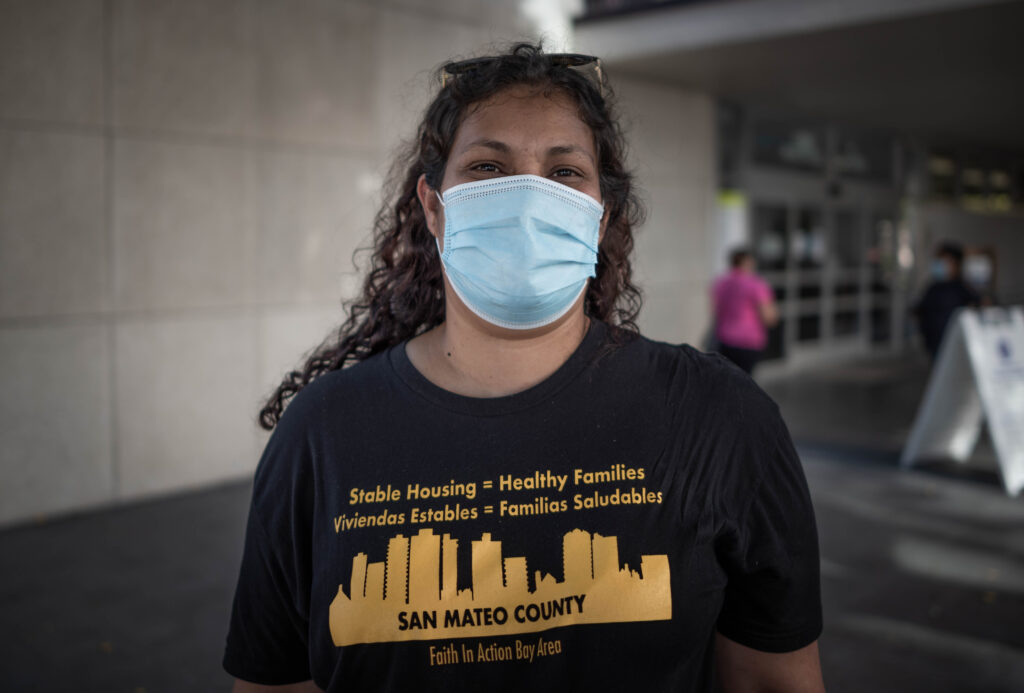 According to Guzman, the denial of supervisors to extend the moratorium is causing some landlords to put pressure on tenants. “Yesterday I got a call from a desperate elderly woman because her landlord is harassing her so much that he told her to pay him now or leave, but the landlord is acting inappropriately because the moratorium is still in place.”

Guzmán says that while she was on the phone with the woman who had been harassed by her landlord, she felt bad because of the high level of stress she was feeling, and her husband had to take her to the doctor in an emergency.

“Many people like this family are going through unnecessary stress. Those most affected by the upcoming eviction crisis are the elderly and children, as they are the most vulnerable. That’s why we’re asking supervisors to rethink how supporting families is in the best interest of the entire county.”

“The Supervisors have the power to stop these evictions and save people’s homes,” said Gabriel Manrique, a member of El Comité y Luna. “They must extend the moratorium through the end of the state of the state of emergency, pass a policy to make tenants´ COVID -19 rent debt non-evictable debt, and allocate more funding to rental assistance for tenants and mortgage relief for small landlords.”