ASIAN DIASPORA STANDS UP TO BE COUNTED IN UPCOMING CENSUS 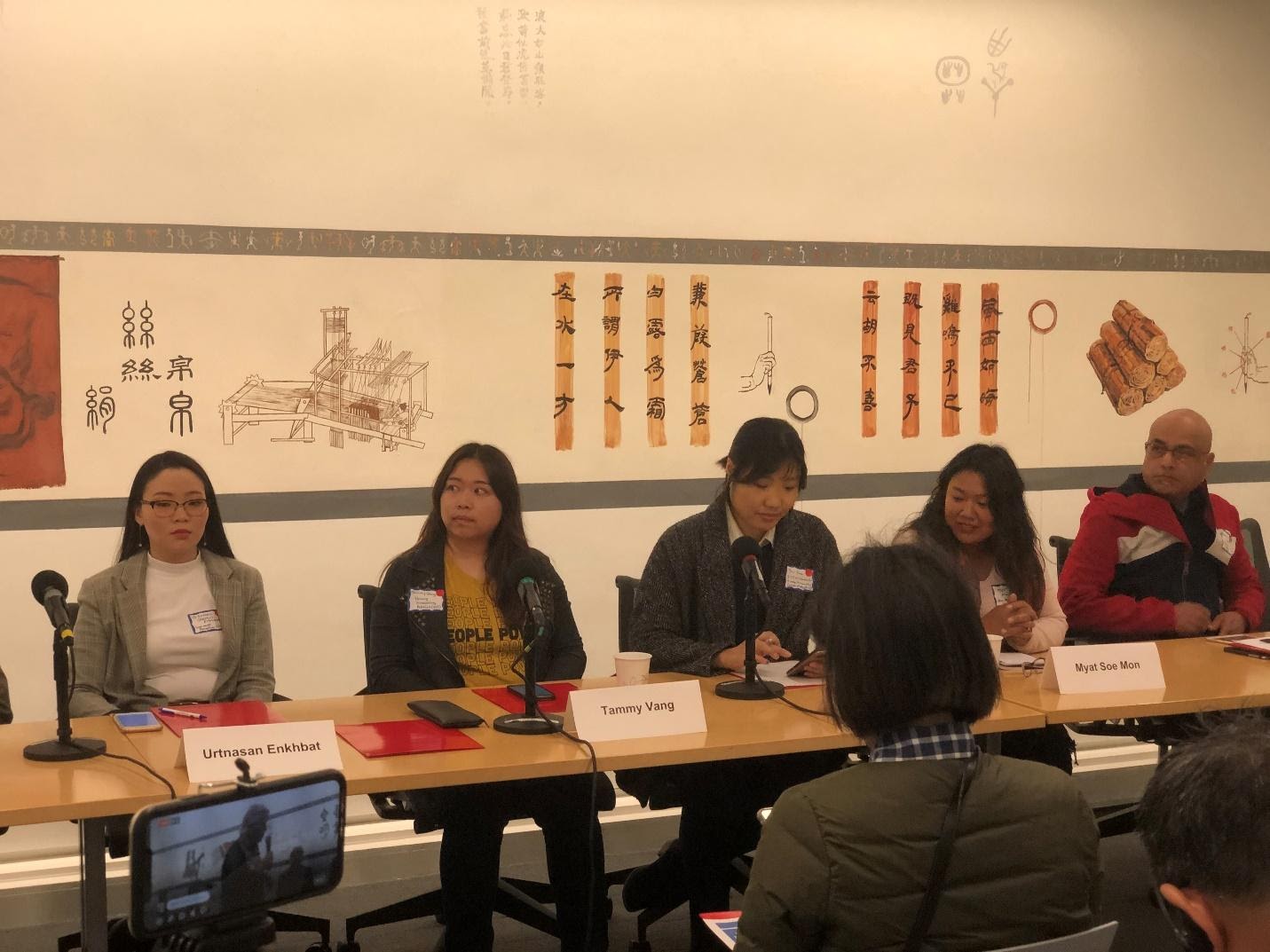 From left: Urtnasan Enkhbat, Tammy Vang, Yeri Shon, Myat Soe Mon and Ganesh Subedi, members of the second panel of speakers to address the importance of their communities being included in the 2020 Census, and some of the challenges standing in the way of obtaining a complete count, in a press briefing at Chinese for Affirmative Action, March 5 in San Francisco (Photo by Nida Qasim Khan, Ethnic Media Services).

As the 2020 census begins in earnest, representatives of Nepalese, Burmese, Bhutanese and Mongolian immigrants joined census officials and community organizers at a briefing for Asian American media to discuss the high stakes of getting an accurate count for their communities.

Together with Native Hawaiians and Pacific Islanders, these and other immigrants from Central, South and Southeast Asia represent the fastest growing sector of Asian immigrants to California over the last decade. Yet they are too new to have formed the civic organizations or media platforms to make their presence felt in the broader Asian American landscape.

Speakers agreed that being counted in the 2020 Census would change that.

Some 20% of Californians identified as Asian American-Pacific Islander in the 2010 census, said Hong Mei Pang of Chinese for Affirmative Action, which cohosted the March 5 briefing along with Ethnic Media Services.

“More immigrants come to the United States from Asia than from anywhere else,” Pang said. “But the Asian American community is not monolithic, and without an accurate count, these newer waves of Asian immigrants will be invisible.”

Stephanie Kim of United Way Bay Area echoed Pang’s point on the opening panel: “We have diverse needs requiring data and approaches customized to each community. If one of us is not counted, we all suffer from the undercount. If every one of us is counted, we all benefit.”

Linguistic and cultural isolation are challenges common to every recently arrived group. But speakers pointed to some immigrants’ experiences in their home countries that make them especially fearful of being counted.

Robin Gurung of Asian Refugees United, born and raised in Nepal, recalled how the Bhutanese government used a census in the late 1980s to divide the country between native Nepalese and people of Bhutanese origin. He and his family were deported to Bhutan along with thousands of others. “So in the United States, there’s still a lot of worry and questions about the census – like what are the benefits, and what do we need to be careful about?”

“When they hear the word ‘census,’ it’s like a nightmare,” agreed Ganesh Subedi, of the Bhutanese Community Association of California. His community’s fear of government intrusion, he said, caused it to be vastly undercounted in the 2010 census.

Among its population of 45,000, he estimates, only 19,000 completed the census questionnaire.

In 2012, the Nepali Association of Northern California tried to collect census-type data on its own, the association’s former director Prem Pariyar said. But fear got the best of the community and the effort failed. Meanwhile, the community kept growing (http://facts.aapidata.com/nationaldata/) – by some 222% between 2010-2016, according to data compiled by Karthick Ramakrishnan of U.C. Riverside’s Center for Social Innovation.

“This is a great opportunity for us to establish our community,” Pariyar said. “We don’t want to lose our chance at being represented.”

Population growth of their communities was a common theme at the press briefing.

Myat Soe Mon, of One Myanmar community, spoke about ethnic cleansing in her country based on information the government gleaned under the pretext of conducting a census. “But here,” she said, “our population is growing. We have to keep moving forward.”

“The census data says we are just 32,000 Mongolians living in the U.S.,” noted Urtnasan Enkhbat, a student from Mongolia who wrote her senior thesis on Mongolians in the Bay Area. “We are a lot more. We have close to 10,000 just in the Bay Area.

Our numbers are growing rapidly, but it’s difficult to learn about us – we have no community centers or channels for communication.” She recently told a group of fellow Mongol immigrants, “We live in the U.S. But without data, we don’t exist in the U.S.”

Almost every speaker raised the issue of confidentiality as a further barrier in promoting the census.

Sonny Le, a refugee from Vietnam who has worked as a Partner Specialist for the Census Bureau since the 2000 Census, was quick to respond. Personal data collected by the census is forbidden to be disclosed to anyone for 72 years, even other government agencies and law enforcement, Le asserted. Penalties for violations run to a quarter million dollars and five years in prison. Nor has the data been breached.

Yet even among the Hmong, well-established now as the seventh largest population of Asian Americans, with a 13% increase between 2010 and 2016, the census is still an unknown.

“People my age had never heard about the census before,” said Tammy Vang, a Fresno-born daughter of Hmong refugees from Laos who works as a community organizer for Hmong Innovating Politics.

As the youngest speaker at the briefing, she also raised what for her is a deeply personal concern about the census — how to identify oneself in terms of gender.

“There is still a deep stigma attached to LGBTQ issues in the Hmong community,” she said, holding back tears. “The single binary choice on the census only makes it harder.”

Summing up the energy among attendees in the room, Gurung had the last word about the importance of the census: “We have to make ourselves visible. There’s nobody (else) out there who will.”