WHERE BREATHING IS EASY – OPEN SPACES ARE CRITICAL FOR PUBLIC HEALTH 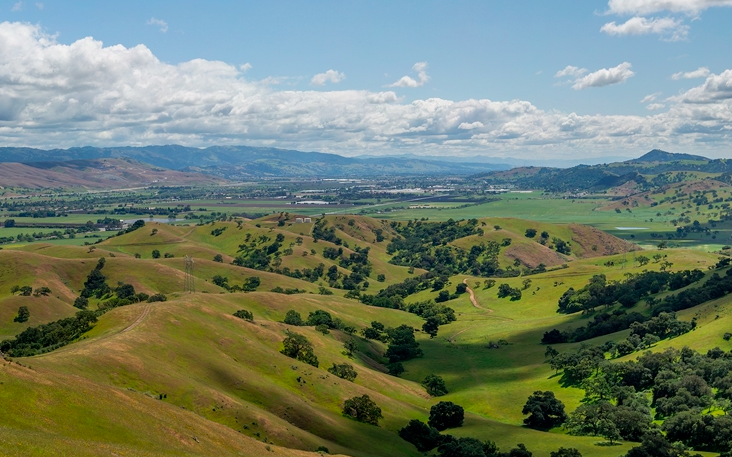 Measure T seeks to renew Measure Q, which has allowed the County to preserve North Coyote Valley from the hands of developers.

Having access to green space is critical for maintaining good public health, say public health experts and advocates for Measure T, an initiative on Santa Clara County’s Nov. 3 ballot which would preserve a tax used to maintain and purchase open areas.

“When we think about health, we often think about a doctor’s office or a nurse or hospital, but health is really a state of well-being,” said Sadiya Muqueeth, director of Community Health at The Trust for Public Land. “Research demonstrates that spending as little as two hours a week in nature — about 15 to 20 minutes a day — can improve self-reported health and well-being.”

“Nature is an essential part of the public health infrastructure,” said Muqueeth, one of several panelists speaking at an Ethnic Media Services news briefing on Measure T. She pointed out that areas without trees have a higher rate of fine particulate matter which can cause asthma and other respiratory illnesses.

People who live closer to green spaces are more likely to be physically active which helps to prevent many chronic diseases, including hypertension or obesity, Muqueeth added, noting that physical activity among older adults is linked to delaying the onset of cognitive decline.

Measure T seeks to renew Measure Q, an initiative overwhelmingly passed by Santa Clara County voters in 2014, which generates more than $7.8 million annually to preserve and buy open spaces in the region via a $24 parcel tax.
The measure has almost no opposition, said Kat Wilson of the Santa Clara Valley Open Space Authority which sponsored the measure. A lone person from the Santa Clara Valley Taxpayer’s Association has written a statement opposing the initiative because of the increased tax. SCVOSA has issued a rebuttal.

Revenues from Measure Q have allowed Santa Clara County to almost double its open space preserves for a total of 26,000 acres, with 26 miles of hiking trails which are open year-round. Shay Franco Clausen, a board member for SCVOSA, said the County has managed to keep its spaces open even amid the pandemic.

“So many people consider open space to be essential for health reasons and mental health. It really is a key part of our sanity during these times,” said Clausen. “I grew up as a child in these cherry fields and plum fields, and the beautiful mountain range. I’m proud that I raised my five children in the same spaces that I enjoyed as a child,” she said.

Revenues from Measure Q allowed the County to buy 937 acres of North Coyote Valley at a cost of $93 million, preserving it from the hands of developers who had long eyed the picturesque rural expanse for developing housing. Coyote Valley has also been considered for development by Silicon Valley tech companies: the land was previously zoned for light industrial development.

Almost half of the money to buy North Coyote Valley came from Measure T revenues; the Peninsula Open Space Trust and the state of California also chipped in to buy the space.

California state Assemblyman Ash Kalra, who represents portions of Santa Clara County in the state Legislature, said buying open space is essential to preserving it. Changing the city’s general plan to zone areas permanently for open space does not work, he said.

“On any given Tuesday, a different Council 10 years from now could say: ‘You know what, we changed our mind. We’re going to let some factory open up there so that we can have jobs,” said the assemblyman. Purchasing a space permanently, on the other hand, preserves it from encroachment.

“The scientists are telling us we need to protect this land,” said Kalra, referring to climate change and California’s pandemic of wildfires. “Once you develop over land and lose it, it’s gone forever.”

Carbon sequestration from forests and urban canopies is also critical to mitigating the impact of climate change on the state. A single tree can absorb roughly 48 pounds of carbon dioxide annually. San Jose city councilman Sergio Jimenez said the city was attempting to plant more trees in areas which currently lack urban canopies, and noted a correlation between the lack of trees and poor economic development.

“Organizations that actively try to plant more trees recognize the value both in the health of residents, but also obviously the capture of carbons,” he said.

The San Jose native said he grew up in a small apartment, and in his youth, never visited Yosemite or other national parks or even large parks on the outskirts of the city. “And so a lot of folks that oftentimes don’t have access to these spaces don’t learn to appreciate it,” he said, noting that many Latinx people don’t consider themselves environmentalists, but ardently care for the land. He advocated for outreach to the community to bring them in to the process of decision making on environmental issues.