For Caribbean Diaspora, Elizabeth’s Passing Raises the Specter of the UK’s Colonial Past 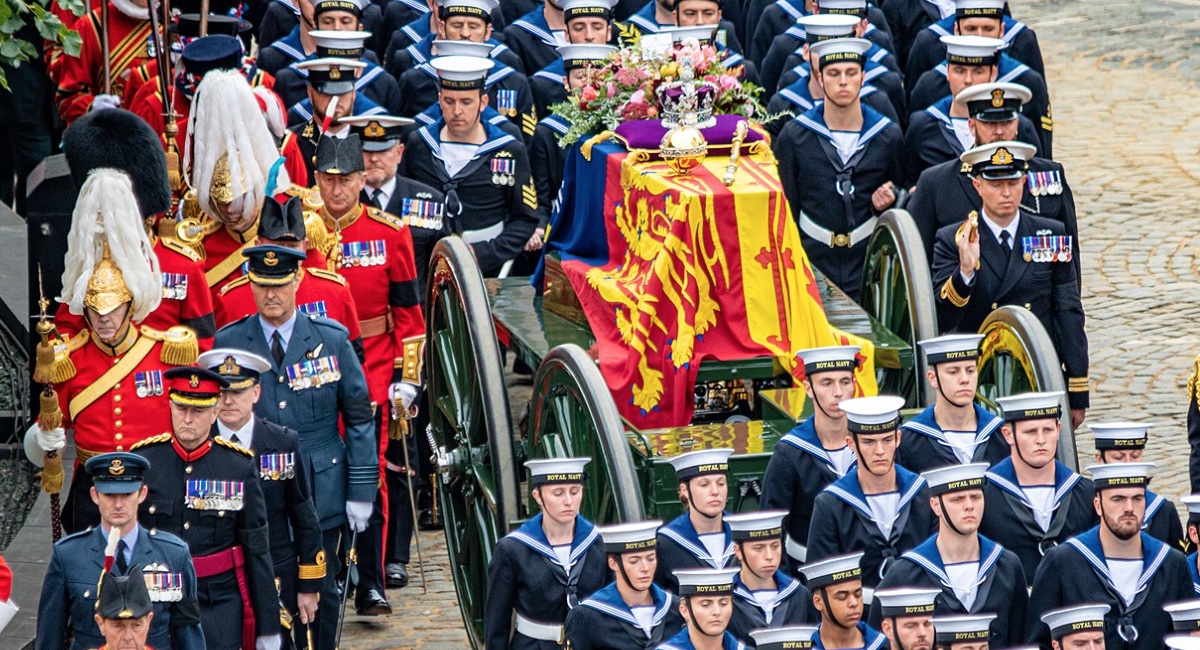 For the Caribbean diaspora community, the passing of Queen Elizabeth earlier this month caps a steadily widening drift among commonwealth nations of the Caribbean away from the British monarchy and the empire it represented. For many, Queen Elizabeth’s passing and the assumption to the throne of her son, now King Charles, augurs the beginning of a new geopolitical relationship in which island nations once tethered to Britain’s colonial past are now charting a more explicitly independent course. Lyndon Johnson is the publisher and editor of CaribPress based in Los Angeles. He spoke with EMS about the Caribbean community’s response to Elizabeth’s passing and what it means for the future of the region. (Image: A funeral procession in London for the late Queen Elizabeth, who died Sept. 8.)

What was your immediate reaction when you heard of Queen Elizabeth’s passing?

First of all, CaribPress sincerely expresses its condolences to the people of Britain and the royal family. Losing a beloved family member is always a sad event. But I personally have never accepted the British monarchy due to its history with Africa and slavery. Mainstream coverage (of the queen’s passing) has tended to focus on Queen Elizabeth’s legacy, and on her son and successor, King Charles, and then report that reactions are mixed from many former British colonies. But to many of us in the Caribbean American community, the Queen’s passing reminds us that there are still many unresolved issues, like national identity without British sovereignty, an apology from the monarchy for slavery and colonization, and reparations.

How does a Jamaican or Bahamian identity under British Sovereignty different from one without?

The difference is substantial. Growing up in Jamaica, Jamaican national identity was always confusing to me and my friends. Are we Jamaican or Jamaican British or Afro-Jamaican? British culture was imposed on us. But overtime, we embraced many British traditions, like drinking tea with milk, driving on the left, playing cricket, following the British educational curriculum and metrics, partaking in the parliamentary system, and of course speaking English. However, consciously we know we’re not British and will never be considered as such in the UK.

And unlike other “democratic independent” nations like the US or Mexico or France, we can elect a prime minister but cannot choose our head of state. Instead, our head of state is the Governor General (GG), appointed to represent the interests of the British monarchy, the same institution that enslaved and colonized us. Granted, the GG position is largely ceremonial, but the framed pictures of the GG and Queen Elizabeth that hang high in classrooms, government offices, and courthouses, do send a message that the British monarchy is still hovering above you.

The US was a British colony, but since 1776 it has charted its own course while maintaining a largely healthy relationship with the UK. That’s the kind of identity that most people in the Caribbean Commonwealth, including Jamaica, desire.

Is there a movement to drop British sovereignty?

Yes, and it has gathered momentum in recent times. In Africa, after WWII, many nations like Kenya, Ghana, and Uganda dropped British sovereignty as soon as they won their independence. In the Caribbean, Guyana, Trinidad and Tobago, and Dominica were among the first to depart from the British monarchy in the 1970s. In the last several years, Jamaica, Barbados, Bahamas and several others have begun the process. And there have been many similar debates in Canada, New Zealand, and Australia.

Why are reparations important?

Slavery was a great injustice forced upon us by the British across centuries and over many generations. It victimized millions of our ancestors and their descendants. We want closure. Adding to that injury is that while the UK government and British monarch have constantly dodged our demands for an apology and reparations, it came to light in recent years that the UK government compensated slave owners and their descendants to the tune of nearly $20 billion in today’s money. Payments started in the 1830’s with the last payment made in 2015, according to a recent expose that showed compensation was ostensibly given in exchange for agreeing to end slavery, though we know it continued for years after. Those of us in the Caribbean diaspora community felt the sting of this hypocrisy, that the UK government would compensate slave owners but ignore our cries, the cries of the descendants of slave victims for an apology and reparations.

What brought you to the US and why did you launch Carib Press?

My family’s migration to the US was a gradual process. My father first came to New York in the 1970s for work. He enrolled in accounting classes at night and after landing a job with an accounting firm in Los Angeles, he sponsored me to join him in 1988. Once in America, I went to school to study computer graphics and got my first job at Bank of America.

After a few years, I realized that mainstream America didn’t know who we were. To most people, we were perceived as African Americans or Hispanics, if they heard Spanish spoken. Within the Black community, our identity was also unclear because our accent and word use were different, we listened to Reggae, Calypso, and Soca music, and our food had jerk chicken, Indian curry, and spices. In the Hispanic community, the Cubans, Puerto Ricans, and Dominicans had similar experiences.

In the early 80s, Hollywood films and mainstream media often portrayed the Caribbean region as lawless, infested with drugs and dangerous traffickers. Back then any Jamaican with dreadlocks in LA could be seen as drug dealers.

So, I wanted to change these negative images and raise awareness about the Caribbean community. Back in Jamaica, besides having a mechanical engineering background, I also studied arts at The Jamaica School of Arts and Crafts (now known as Edna Manley College of the Visual and Performing Arts). I decided to use my skills to create a news magazine that focuses on arts, music, and food – which happen to be among the essentials in Caribbean culture – to tell stories about the Caribbean diaspora and feature positive role models.

In 1999, I launched California Carib Press as a bilingual magazine in English and Spanish. We later dropped the Spanish version and simplified the name to Carib Press to expand our audience beyond California with coverage of the Caribbean diaspora in America and developments in the Caribbean. This year, we are celebrating 23 years of serving our community and will be having an anniversary event in November.

Do those stereotypes still linger?

It’s always a work in progress but I think our effort has helped in raising awareness and promoting pride in the Caribbean diaspora. We’ve featured a number of positive role models including Secretary of State Colin Powell, Attorney General Eric Holder, sprinter Usain Bolt, superstar Bob Marley and his musical family, Salsa diva Celia Cruz, rapper and actor Wyclef Jean, Supreme Court Justice Sonia Sotomayor, and of course our current Vice President Kamala Harris. In fact, these individuals have become role models not just for the Caribbean diaspora in America but people from around the world in the areas of statesmanship, sports, music, films, arts, and social justice.

Imaging a Multi-Racial City After a Political Earthquake