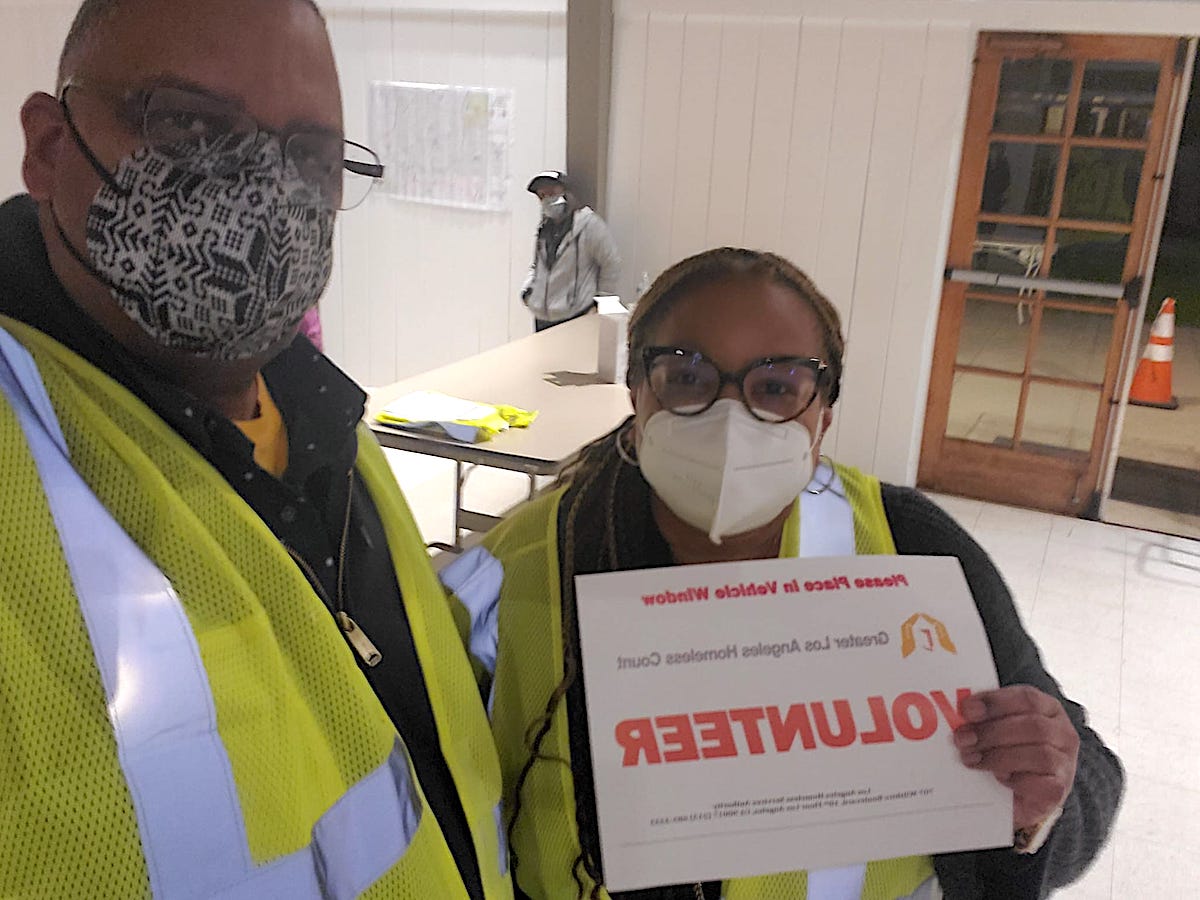 (Image: Pastor John Cager of the Ward AME Church in Los Angeles, dons a mask as he takes to the streets for the annual Greater Los Angeles Homeless Count. (photo courtesy of John Cager, via Facebook)

Faith leaders across the state are pondering whether to continue requiring their congregants to wear masks, after California dropped its COVID-19 mask mandates last month.

As of March 12, masks are no longer required in indoor settings in California, with exceptions for public transit, healthcare settings, long-term care facilities, jails and prisons. The California Department of Public Health now strongly recommends continuing to wear masks in indoor settings, including K-12 schools.

Rev. John Cager, senior pastor at the Ward African Methodist Episcopal Church in Los Angeles, told Ethnic Media Services that his church — which has served the local community since 1902 — will continue to require masks at all its indoor services, along with proof of vaccinations. “Our church has a high percentage of seniors, an age group that is particularly vulnerable to COVID-19,” he said, noting that one out of every 100 people in the US aged 65 and older has died of COVID-19.

Like state health officials and other faith leaders, Cager said that his church is looking at data and the spread of the BA.2 variant to guide decisions. Some congregants have resisted, saying the restrictions are too strict, while others have embraced them, with the aim of keeping safe all families attending services. About 300 families belong to Ward AME Church, and 200 people attend services each Sunday.

Before the lockdown began on March 17, 2020, the Ward AME Church dispatched volunteers to the homes of elderly congregants to install apps and software on their smart phones and televisions to allow them to attend church services remotely. As the lockdown began, services were also live streamed on social media. Cager kept in touch with those unable to attend remotely via phone calls and mailers.

The church has also served as a pop-up clinic for vaccines and boosters. Cager said he has worked hard to assure his congregants about the safety and effectiveness of the vaccines, working against a lot of misinformation, and an inherent mistrust of government prevalent in the Black community. “God gave vaccines for a reason,” he tells his members.

Pastor Anthony Kim, of the Choon Hyun Mission Church in Los Angeles, said his church is following state and county guidelines. Initially, masks were required as the church began regular services again last fall. “Our parishioners were okay with this; there was no real resistance,” said Kim.

But as California lifted its mask mandates, church leaders decided to make masking optional. Kim said some members continue to wear masks, while others don’t. He encourages this as a choice for individual congregants.

Kim said he wears a mask when a congregant wears theirs but does not when others are going without. “We want to display Christ’s attitude of tolerance towards all,” said Kim, who leads the church’s Christian education program.

Many of the church’s parishioners have themselves been affected by COVID-19, Kim said. Some caught the virus themselves, while others saw family members suffer. Others lost a job or home. He said children in his church have been deeply impacted by mental health challenges, with the loss of in-person learning, and friends. “We have been trying to help, with prayer, pastoral care, doing what God intended us to do,” he said.

“When we are going through trials, that is when our true nature shines,” said Kim.

Bomi Patel, President of the Zoroastrian Association of Northern California, said the organization had to determine its own masking policy as it prepared to celebrate New Year — Nauroze — on March 20, at the Oasis restaurant in Fremont.

The Zoroastrian faith is one of the oldest in the world, originating in Persia in the 6th century BCE. The community has dwindled to fewer than 200,000 Zoroastrians worldwide. Observers celebrate the New Year on the first day of spring.

“This was our first celebration since March of 2019,” said Patel. “We requested everyone to be vaccinated and to wear a mask.”

To be on the safe side, ZANC rented a hall with a capacity of 240, but then limited tickets to the event to just 150. Instead of the usual 10 seats per table, each spot sat only eight, so that there was more room between seats.

Celebrants wore masks as they entered the hall, but most took them off shortly afterwards. Patel said he kept his on all evening, removing it only when he made a speech, and to eat.

The small Zoroastrian community in Northern California stayed engaged during the pandemic with online Bingo and game nights, and guest lectures via Zoom. This January, the organization re-started its Sunday school program for children to learn about the ancient faith. Masks were mandated for Sunday school, which was initially held outside, but then moved indoors.

“There was no resistance to masks,” said Patel. “Everyone just wants to keep safe.”

Visit MyTurn.ca.gov or call 833-422-4255 to schedule an appointment to get your COVID-19 vaccine or booster. Help is available in more than 200 languages.