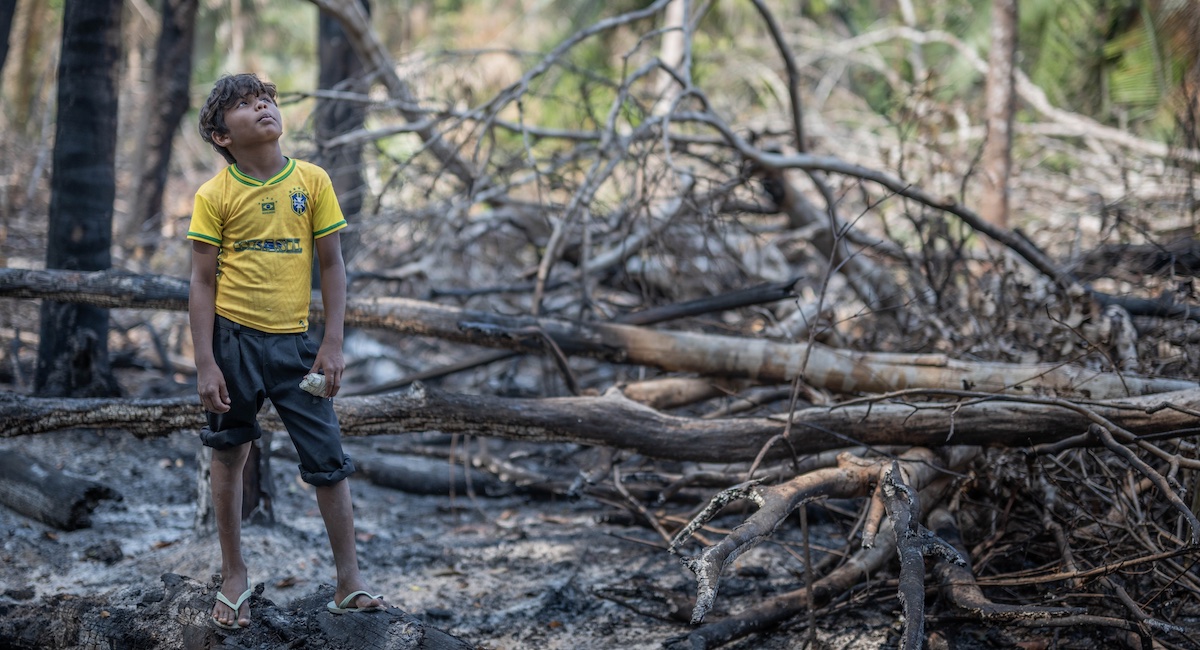 Above: Icaro Karipuna stands amid recently scorched forest near his village in the western Brazilian state of Rondônia. (Credit: Manuel Ortiz Escámez)

Icaro Karipuna is a precocious 8-year-old who spends his days swimming in piranha infested waters or learning to fish from his father, André, who is village head of the Karipuna tribe in the western Brazilian state of Rondônia.

Icaro loves photography, says Manuel Ortiz Escámez, founder of Peninsula 360 Press, who recently returned from a trip to Brazil to cover the first round of presidential elections there. “He would follow me around, ask for my camera. When I asked what he wanted to shoot, he said, ‘Obviously, the plants, the animals.’”

Obviously, because this is Icaro’s world. The Karipuna are among the hundreds of Indigenous tribes who call Brazil’s Amazon home. And like many Indigenous communities, the past several years under the presidency of Jair Bolsonaro have been tenuous, if not outright dangerous, for Icaro and his people.

That could be about to change, depending on the outcome of a second round of elections on October 30. Bolsonaro, who early on in his presidency embraced the nickname “Trump of the tropics” for his hard-right policies, faces former president and champion of the left, Luiz Inácio Lula da Silva — or Lula as he is more commonly known.

Lula barely eked out a win in a preliminary round of voting earlier this month, in an election that polls at the time suggested was his to lose. Instead, Bolsonaro managed to force a second round, while his party managed to increase its hold on the legislative branch.

According to Ortiz, the outcome of next week’s second-round vote will determine the trajectory of Latin America’s largest democracy, pushing the nation either in the direction of greater social and environmental justice or, in the event of a Bolsonaro win, “neo-fascism.”

It could also determine the fate of the world’s largest rainforest, often referred to as the “lungs” or “heart” of the planet, given its role in sustaining global weather patterns and slowing climate change, akin to that of a vital bodily organ. Loss of the Amazon, a very real threat should deforestation continue at its current pace, would dramatically accelerate both.

But for Icaro, “this election is life or death,” says Ortiz.

The sustained campaign of violence targeting Brazil’s Indigenous communities is well documented. And while it predates Bolsonaro’s presidency, he is widely credited with giving the green light to the destruction now occurring across wide swaths of the forest that is at the heart of that violence.

Under Bolsonaro’s presidency many of Brazil’s regulatory bodies that once acted as a check on illegal actors responsible for much of the record deforestation seen in recent years have been hobbled or otherwise dismantled. Bolsonaro has also repeatedly signaled his unwillingness to prosecute those who violate environmental laws, leading to a culture of impunity when it comes to the forest and Indigenous rights.

And that ecological violence easily bleeds into violence targeting Brazil’s Indigenous peoples, long recognized as critical defenders of the land. In 2021, 176 Indigenous Brazilians were killed, mostly in disputes over land stolen by invaders who encroach on Indigenous territory, clearing the forest for agricultural or mining purposes. That same year the Indigenous Missionary Council recorded 305 cases of “possessory invasions, illegal exploitation of resources and damage to property” across 22 states.

The murder of journalists Dom Philips and Bruno Pereira earlier this year by poachers highlights the violence that penetrates so much of this otherwise magical landscape, seeping like a shadow to envelop anyone who threatens to shed light on the growing crisis. People like Icaro.

Ortiz describes Icaro as all smiles. “He’s a happy boy who can be happy with the simplest of things.” He recalls a scene where local youth in the village, located several hours south of the city of Porto Velho, turn stones and pebbles into toys, lining them up like Lego blocks or tossing them into the water, diving in afterward to hunt them down.

But when Icaro ventures up or down river with his father, the smile vanishes. “He knows the risks,” says Ortiz, explaining that in this region of Brazil dangers abound and they typically come in the form of invaders and land grabbers, often linked to organized crime and heavily armed.

In one instance, Ortiz says Icaro’s father, André, pointed at a set of motorcycles parked along the riverbank. According to André, the bikes belonged to a known gang of armed poachers. “It’s good we only see the bikes,” André remarks, gesturing for Ortiz to hide his cameras.

Indeed, according to Ortiz the Karipuna acknowledge they are outgunned, literally and — at least currently — politically. They fight back with information, by raising their voices, he says. They tell him that they want more people to come to the region, to bear witness to the destruction, including the recent torching of a Karipuna shed where village members stored seeds.

“They are destroying us. Not only the territory; they want to get rid of us,” André notes grimly.

Some 30 million people — Indigenous and non-Indigenous alike — live in the Amazon Forest, the vast majority of them in Brazil. Poverty is endemic, the state often invisible or absent altogether. Protecting this vital region will require addressing these root causes of the ongoing violence and destruction, a task for which Brazil will need international support.

Next week’s election will determine if there is even the political will in Brasilia, the nation’s capital, to do so.

“At night you can hear the nature. You’re hearing all these noises, and you feel like you want to cry,” recalls Ortiz of his first night in the forest. “You can hear the birds, the insects, the water, the wind. And you realize, this is our land. This is our world.”