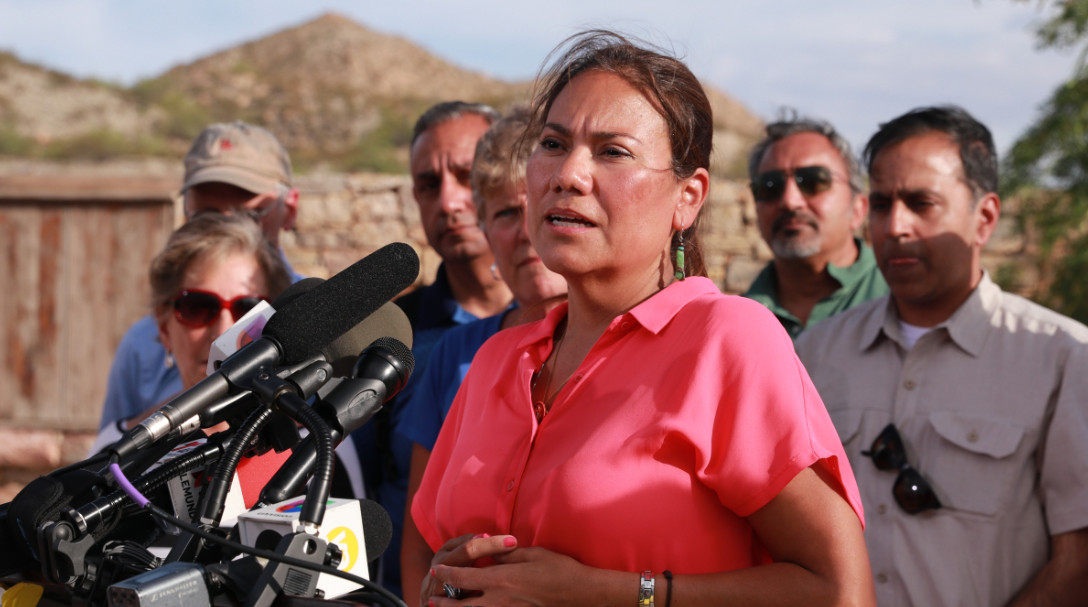 The congresswoman representing El Paso, Texas, joined civil rights and immigrant rights activists in calling on her fellow lawmakers to have nothing further to do with the anti-immigrant, white supremacist group FAIR, the Federation for Immigration Reform, which this week is preparing to host a gathering of talk radio broadcasters intent on further expanding a message of white supremacy.

“It’s a matter of life and death,” Veronica Escobar, the congresswoman from Texas’ 16th congressional district, said, citing the recent tragedy in which a killer traveled “more than 600 miles from Allan (Texas) to El Paso to slaughter Mexicans, or those who look like them.”

Twenty-two people were killed and 24 more, ranging in age from 2 to 82, were hospitalized before the gunman surrendered to police, claiming he was “targeting Mexicans,” according to sources at the scene, a Walmart store in that border city that, Escobar said, has “long been one of the safest cities in America – for at least two decades, probably longer.”

The alleged killer is believed to have posted a screed on the Internet less than half an hour earlier, describing the weapon he would use and echoing claims by President Donald Trump and anti-immigrant and white supremacist factions such as those referring to immigrants as “invaders.”

“Words have consequences,” Escobar said. The work of groups such as FAIR, she said, is “fueling the hatred and inspiring people to do us harm, putting targets on the backs of vulnerable community members.”

The group’s event this week is its 13th “Holding Their Feet to the Fire” event. In past years, it has set up dozens of talk-radio hosts with fully equipped work stations and welcomed many congressional representatives, such as Steve King, R-IA, David Vitter, R-LA, and senators including Jeff Sessions, when he was representing Alabama in 2015, Mike Lee, R-UT, and various prominent anti-immigrant figures, such as former Maricopa County (Arizona) Sheriff Joe Arpaio.

FAIR is “using bigotry to build political power,” with “unprecedented levels of influence in the Trump administration,” said Lindsay Schubiner of the Western States Center. The manifestations of this, she said, are “increased tensions and separations at the border, detention during proceedings and more stringent documentation required for asylum claims.”

She quoted a gleeful report by one FAIR acolyte, saying that “every single component” of the Trump administration’s immigration policy, “is what we’ve fought for.”

Julie Kirchner, FAIR’s executive director from 2007 to 2015, now works in a senior role at the Department of Homeland Security, she said. And an upper-echelon official at Immigration and Customs Enforcement (ICE), is John Feere, formerly of the Center for Immigration Studies, which shares with FAIR the legacy of a common founder, the late John Tanton.

This year’s HTFTTF event is scheduled for Sept. 25 and 26 at Washington, D.C.’s Phoenix Hotel. Congress members who may be planning to attend have not yet made their intentions known, Schubiner said.

FAIR is “a deeply racist organization,” said Heidi Beirich, of the Southern Poverty Law Center, which describes FAIR as a hate group. “This is an organization informing our politics,”

It’s incumbent on the public to be aware of it and its work, and be sure that representatives, such as those in Congress, do not allow themselves “to be put in a position where you’ve got to publicize them,” Beirich said.

“This organization has been riddled at board and staff levels with members from hate groups” whose agenda, she said, is to “keep America white.” With a past that includes running anti-immigrant advertisements as long ago as 1980 and ties to prominent white nationalists and Holocaust deniers, FAIR is “a scary, toxic combination that need to be denounced. It is a very serious matter.”

Too often, another teleconference speaker, Hassan Ahmad, of the HMA Law Firm, so-called mainstream journalists have failed to identify the nature of FAIR and its fellow travelers when the groups or their members are in the news.

“It’s a basic standard of journalistic integrity,” he said. Ahmad has taken the University of Michigan to court, insisting that it reveal the contents of Tanton’s papers, bequeathed to the university. To date, the courts have ruled in his favor, but the university is appealing the case.