Svoboda (Liberty) is the world’s oldest Ukrainian language newspaper published without interruption since its founding in 1893 in New Jersey. 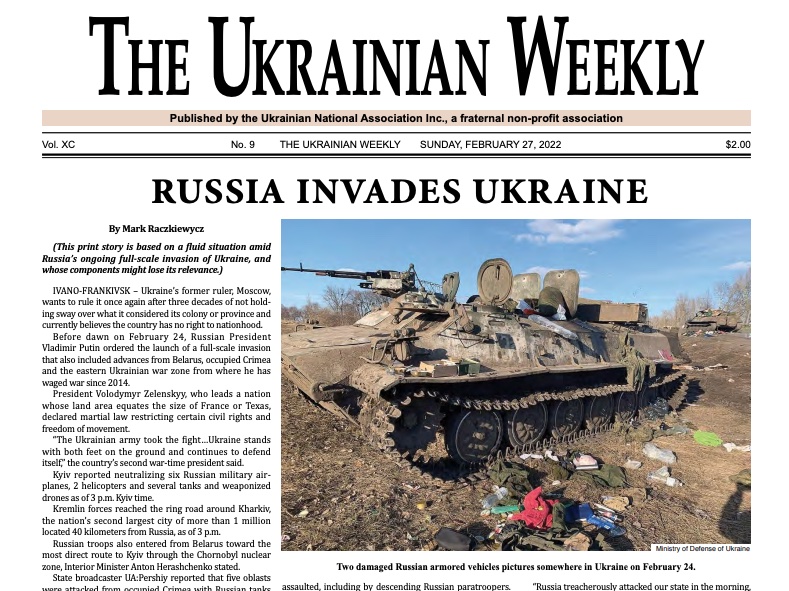 Svoboda (Liberty) is the world’s oldest Ukrainian language newspaper published without interruption since its founding in 1893 in New Jersey. It owes its origins in part to Russia’s imperialist policy of banning the Ukrainian language whenever it took control of Ukraine. Today Svoboda is published by the Ukrainian National Association, Inc. (UNA), a community-based organization originally founded in 1894 to help Ukrainian immigrants settling in America. In 1933, UNA created a sister publication in English called The Ukrainian Weekly to connect with second generation Ukrainian Americans. Andrew Nynka has served as editor in chief of Svoboda and The Ukrainian Weekly since 2020. He spoke with EMS’ Julian Do about Russia’s ongoing invasion of Ukraine and the response from the Ukrainian American community. This interview has been edited for brevity and clarity.

How did your family come to America?

My grandparents fled Ukraine to Austria and Czechoslovakia at the beginning of WWII and my parents were born in refugee camps. They came to America through a sponsorship program in 1948 and we settled in New Jersey, where I was born and grew up.

How would you describe the Ukrainian American community in America?

The first big wave of Ukrainian immigrants came to America in the late 19th century to seek better lives. Many settled in mining towns of Pennsylvania in the late 1800s. Today, our number is estimated to be one million with the largest concentrations in New York, New Jersey, Pennsylvania, and Chicago. A number still speak Ukrainian at home like my family. It’s part of our identity. My first language was Ukrainian.

Is there a strong connection between Ukrainian Americans and Ukraine?

Very strong connection. Many Ukrainian Americans still have family ties in Ukraine and a number have gone back to help with investments and technology development over the years. Many Ukrainian organizations also have scholarships for young Ukrainian Americans to study in Ukraine to maintain cultural connections. In my case, when I was 15, my whole family moved to Ukraine because my mother, who was working for a large phone company here, had an opportunity to help upgrade the outdated telephone infrastructure there.

How has the Ukrainian American community reacted to Russia’s invasion of Ukraine?

Heartbreak. They dreaded the war scenario before the invasion… Ukrainian Americans throughout the country are protesting and mobilizing money, aid, and other resources to send to Ukraine. A number have actually gone to Ukraine to fight by joining the Ukrainian government’s newly created International Legion of Territorial Defense.

Did Russia’s invasion surprise you and others in the community?

No. For more than 1,000 years Ukraine, which means borderland , has been ruled by Russia because it stands as a buffer, a gateway to Western Europe. Every time Russia wanted to expand further west, it would take over Ukraine and then proceed to Poland and other neighboring states. Ukraine has played this role as a buffer against Russian advancement for centuries, a role for which it does not get credit from Western powers. We also saw that for more than a month, Russia had mobilized troops along with food, fuel, and blood supplies to the borders. The invasion was imminent.

The initial response to Russia’s build up along the Ukrainian border was tepid, though it has since grown much more robust. What changed?

When Putin uttered the threat of the nuclear option, he crossed the Rubicon. During the Cold War, Ukraine —then part of the Soviet Union — had the third largest nuclear weapons stockpile after the U.S. and Russia. After the Soviet Union collapsed, there was a trilateral agreement signed in Budapest between the U.S., Russia, and Ukraine to transfer Ukraine’s nuclear weapons to Russia and in return, the U.S., Russia, and the UK would provide security assurances to Ukraine. So, Putin’s nuclear option has suddenly pushed the West to a different position. It scares everybody, including possibly Putin’s own generals.

What do Ukrainian Americans think of President Volodymyr Zelensky?

President Zelensky’s heroic leadership in the resistance against Russia’s invasion has made all of us proud. We’re united behind him.

You were recently in Ukraine and had to cross over to Poland in order to get back to the U.S. Why were you there and what did you see?

I was in Ukraine on February 22 to deliver several satellite units to our reporters. When Russia invaded Ukraine on February 24, I was urged to leave the country. Nonstop over two days, I and thousands of Ukrainians fled to the border with Poland under strenuous cold and wet conditions. It was heartbreaking to see women and children struggling. Everyone’s face filled with fear, not knowing what’s going to happen next. Communication was difficult as the massive number of people were trying to access the limited bandwidth signal along the border. But once we crossed into Poland, we were welcomed warmly by the Poles. We were given hot food, soup, and places to sleep. One Polish family took me into their home like a relative. I will never forget that.

What are your hopes as Russia’s invasion continues?

Peace. I hope this war will end quickly and Russian troops return to Russia. I’m optimistic that we will prevail and once again, the Ukrainian people will get to live in peace and Ukraine will remain an independent nation.

Svoboda and The Ukrainian Weekly share two full-time staff with a group of 20 stringers spread nationwide and an international network of contributors, most notably in Ukraine and Eastern Europe. When the Chernobyl disaster occurred in 1986, editors immediately had journalists on the ground providing in-depth reporting. Both publications are supported by subscriptions, advertising, donations, and the UNA, the publisher.

About Andrew Nynka: Nynka has been editor of Svoboda and The Ukrainian Weekly since 2020. He got his first journalism job at The Ukrainian Weekly in 2001. After stints at the Daily Record and the Daily Journal in New Jersey, Nynka went back to The Ukrainian Weekly where he covered the Orange Revolution, the 2002 Winter Olympics in Salt Lake City, the White House, Congress, and the United Nations. In 2003, he broke the story that the Pulitzer Prize was considering revoking the Pulitzer Award given to The New York Times foreign correspondent Walter Duranty whose coverage purposely hid the Holodomor, the terror-famine in Ukraine from 1932 to 1933. Nynka holds a Ph.D in journalism from the University of Maryland.

The Fentanyl and Meth Double Menace