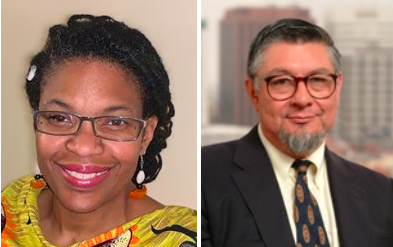 From left to right: Denise Octavia Smith, Executive Director of the National Association of Community Health Workers; Dr. David E. Hayes-Bautista, Director of the Center for the Study of Latino Health and Culture, UCLA Health

Essential workers, who must continue to work even as COVID rates spike and shelter in place orders are re-issued, largely lack health insurance coverage despite the Affordable Care Act, and thus would not be able to access treatment if they become ill from an infection.

The tragedy is most acute in California’s farm worker population, which is largely Latino. About 18,000 farm workers plow the state’s bountiful fields which produce one-third of the U.S.’s supply of vegetables and two-thirds of its fruits and nuts, according to the US Department of Agriculture.

60 to 80 percent of farm workers are undocumented and thus do not qualify for ACA coverage but are especially vulnerable to getting infected and dying from COVID, said David Hayes-Bautista, director of the Center for the Study of Latino Health and Culture at UCLA Health, at an Oct. 23 briefing organized by Ethnic Media Services.

The briefing also featured Denise Octavia-Smith, executive director of the National Association of Community Health Workers, who spoke about the role of community health workers in bridging the gap in health care accessibility. Octavia Smith noted that CHWs are providing health care services such as contact tracing, testing and education in under-served communities, but largely without financial help from federal or state resources.

“Farm workers go out in packed buses. They work shoulder to shoulder in the packing houses,” said Hayes-Bautista, noting there is scant opportunity to practice social distancing at food processing facilities. In the initial months of the pandemic, grocery store clerks, exposed to at least 300 people a day within arms length, were supplied with no personal protective equipment.

Hayes-Bautista released a study a day earlier which highlighted that just a single $3,120 dose of Remdesivir, a therapeutic approved earlier this month for treatment of hospitalized COVID patients, would amount to two months of a farmworker’s salary.

“To pay for just that one item, you would basically have to forgo all food, all housing, all clothing, and all transportation for two months. Well, if you go without food, your average person dies in about 40 days,” he said.

Patients using the drug must receive daily infusions for 10 days for a total cost of more than $31,000.

Simply getting a COVID test can cost upwards of $100 to $2,000 if you’re uninsured, he said, adding that for a family, testing costs can add up pretty quickly.

“Agriculture and film are two of the top industries in California. While the public follows the travails of Hollywood stars dealing with COVID-19, their farm worker counterparts in the state’s economy labor in anonymous poverty,” said Hayes-Bautista in a press statement introducing the study. At the briefing, the scholar said President Donald Trump’s four-day sojourn at Walter Reed Army Medical Hospital after he tested positive for COVID cost the nation $320,000.

Federally Qualified Health Centers — FQHCs — do offer health care to low-income people, regardless of immigration status, but Hayes-Bautista said this was an imperfect solution to the crisis of access to health care, as such facilities are chronically underfunded and often overwhelmed by large numbers of patients.

A conservative Supreme Court could well do away with the Affordable Care Act, which offers subsidized health coverage to 22 million people. If it is repealed, 55 million people in the U.S. would lack any form of health coverage. “In the midst of a pandemic, this is a recipe for absolute disaster,” said Hayes-Bautista.

Denise Octavia-Smith said CHWs have been around for a long time prior to COVID. They work to help new immigrants and refugees navigate health systems and eligibility programs, conduct home visits with families to ensure immunizations and oral health. CHWs also work with cancer survivors and people re-entering the community after incarceration, among a host of other services, with obeisance to cultural health and religious beliefs.

“We are navigators. We are health educators, but we are also community organizers and researchers,” stated Octavia Smith.

CHWs are overwhelmingly women of color and the most underpaid among frontline health care workers. Many of them live in homes without basic facilities, she said. In the first wave of the pandemic, many were furloughed, even though they were badly needed in their communities, because of a lack of funding.

“It is my hope that some of the tens of millions or even billions of dollars coming through the federal government will be invested in community health workers’ centers and lead organizations so that we can come through and out of this pandemic with enhanced capacity, not reduced capacity,” stated Octavia Smith.

When a vaccine becomes available, Octavia Smith said CHWs, who are trusted messengers within a community, can help to dispel myths and fears about getting vaccinated, ensuring that more people of color and low-income people are inoculated against COVID.