What Inclusion for All Means: California Embraces Master Plan for Older Adults 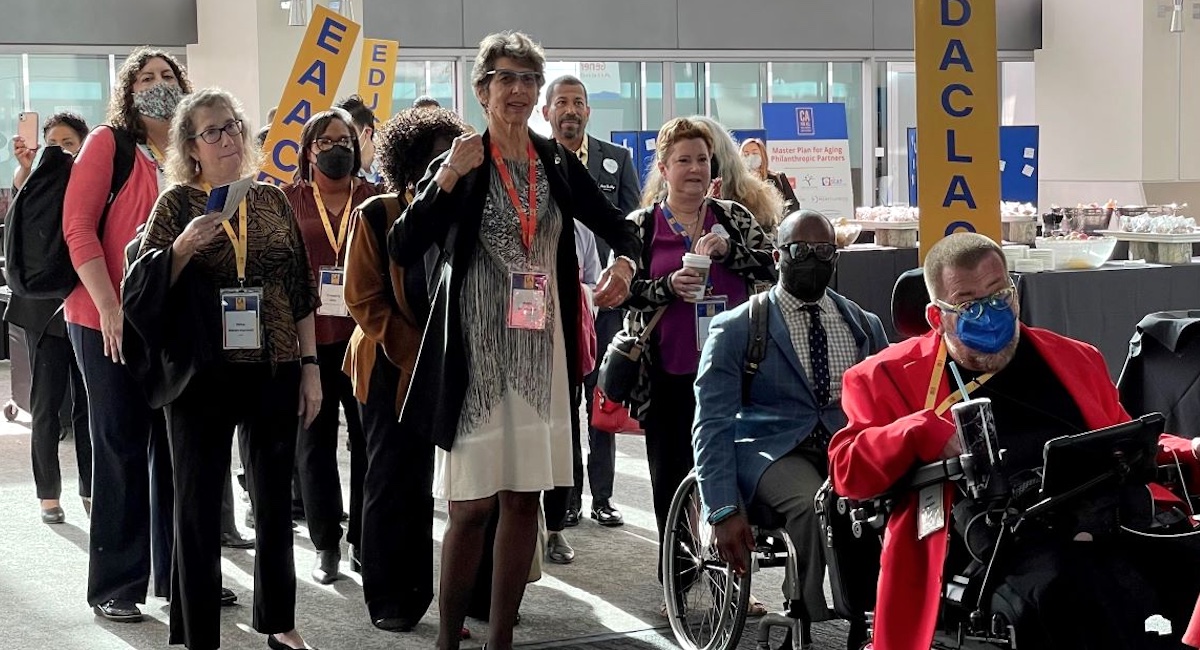 SACRAMENTO, California — A day-long conference highlighting California’s 10-year Master Plan for Aging kicked off with a group of disability and aging advocates singing and clapping to the Pharrell Williams song “Happy” as they marched and wheeled around the auditorium.

“Today is a milestone in our movement for healthy aging,” said Susan DeMarois, director of the California Department of Aging, which hosted the Sept. 20 event, named “CA For ALL Ages & Abilities Day of Action.”

The auditorium was packed with representatives of several state agencies as well as disability and aging advocates championing California’s move towards becoming the most-inclusive state in the nation by 2030.

People over 65 are one of the fastest-growing populations in California. In 2030, the elder population of the state is expected to jump to 8.6 million. In the next decade, seniors will comprise more than one quarter of California’s population.

“We must continue to build statewide capacity and infrastructure so that all Californians have access to the care and services and economic independence they demand and deserve,” said DeMarois.

California’s Master Plan for Aging launched Jan. 6, 2021 via an executive order from Gov. Gavin Newsom. It is a 10-year blueprint addressing current inequities for older adults and disabled people.

Over 132 initiatives have been launched over the past 18 months to support the plan, which focuses on five primary goals: affordable housing for elders; overall affordability in cost of living for people on fixed incomes; a new vision for health care; support for caregivers; and inclusion for all seniors.

“Age and disability are not the problem. Discrimination is the problem,” declared Applewhite.

People ages 65 and older made up 80 percent of deaths from Covid, yet the US health care system was ageist in its response, noted the writer.

“The lethal, measurable global impact of ageism and ableism is that we see older and disabled people as less valuable members of society,” said Applewhite.

During the morning portion of the conference, several aging and disability advocates presented their recommendations for expanding the master plan.

Affordable housing is especially critical, several speakers pointed out. Across the U.S., more than 50 percent of homeless people are over the age of 50 and became homeless after reaching that age.

The most-burdened are renters: housing costs have jumped by 15 percent, but fixed income cost of living adjustments have not kept pace. Older Black renters are most likely to struggle with rent unaffordability and are over-represented in California’s homeless population, according to the organization Justice in Aging.

“Older adults have been squeezed out of the rental market. We need to keep people in housing they already have. Without a home, there can be no home-based services,” said Patti Prunhuber, senior housing attorney at Justice in Aging.

Debbie Toth, president and CEO of Choice in Aging, advocated for better public transportation systems to serve the elderly and disabled. “If you have a roof over your head but can’t get to the grocery store, you cannot live and thrive in your community.”

Pan said California’s programs to support older people and the disabled were growing rapidly, but still not fast enough. He recommended an annual 5 percent increase for Long-Term Services and Support programs.

The doctor-politician also advocated for better support services for caregivers. “I have parents who live close by. We often struggle with how to best support them.”

Arambula lauded Newsom’s expansion of the state’s Medi-Cal program. In June, the governor signed a $307.9 billion budget allocation that makes all low-income adults eligible for Medi-Cal by 2024, including undocumented immigrants.

“There are so many people in the shadows unable to access the healthcare they need. I’m so grateful to Governor Newsom for expanding Medi-Cal regardless of immigration status.”

In an interview with EMS after the panel discussion, Ghaly said: “Covid has been the great unmasker of health care disparities in our state, particularly for our elderly and disabled residents.”

“I lament every day the 96,000 people who lost their lives to the pandemic,” said Ghaly. He noted, however, that the “jolt” of the pandemic presented opportunities to retool the health care system, including expanding access to tele-health.

Department of Rehabilitation Director Joe Xavier moderated an afternoon panel offering personal perspectives from people who are disabled, and caregivers.

“Growing up, I would often hear people say: ‘I would rather be dead than disabled,’” said Xavier, who is blind. “I look forward to the day when conversations normalize disability so that it is woven into the fabric of society just like all of the other characteristics which make us who we are as human beings.”

Simone Nazzal, who cares for her mother who struggles with dementia, spoke of the need to support caregivers, a key piece of the Master Plan. “We expect that all caregivers are able to smile and do their work in supporting another person without taking a toll on themselves. That is not fair,” she said.

“Get help as soon as you can. You cannot afford not to. You need self-care,” said Nazzal.

There are more than five million family caregivers in California, according to the Alzheimer’s Association.

Voting Rights is the Civil Rights Issue of Our Time