POOR ONCE MORE: MILLIONS OF FAMILIES THROWN BACK INTO POVERTY AS CHILD TAX CREDIT EXPIRES 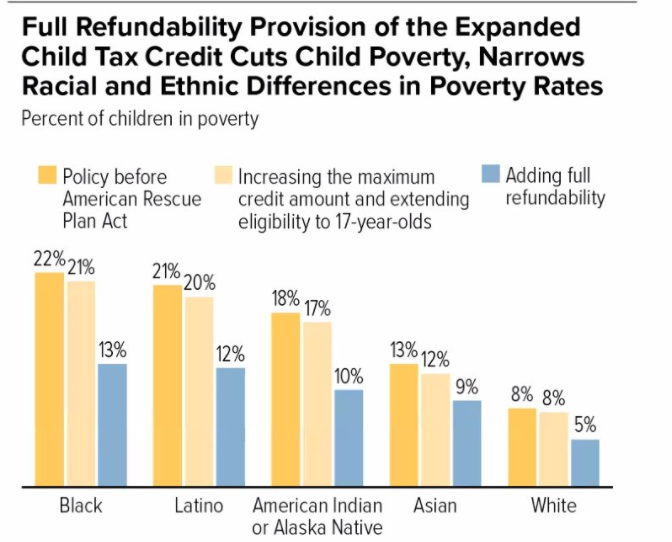 ​As US families stare down the twin barrels of the lingering Covid-19 pandemic and rising inflation, Congress has let expire the Child Tax Credit, a critical source of income which lifted 61 million children out of poverty since its implementation last July.

The Child Tax Credit, which expired Dec. 31, 2020, gave direct payments of $300 per month to children below the age of 6 and $250 per month for children above the age of 6. The monthly payments meant families could immediately access the benefits without waiting a year to receive the credit.

At an Ethnic Media Services briefing Jan. 7, advocates discussed the importance of the benefit and the need for Congress to continue the lifeline.

The credit has been projected to reduce annual child poverty by more than 40 percent, said Claire Zippel, Senior Research Analyst in the Income and Poverty Trends team at the Center for Budget and Policy Priorities. “We know that reducing child poverty helps children healthier and do better in school and really sets them up for success as adults,” she said.

“Hunger rose from 10 million in 2019 to 12 million in 2020. Black and Latino children are twice as likely to face hunger because of systemic racism,” said Loree D. Jones, CEO of Philabundance, a hunger relief project in Philadelphia, one of the poorest large cities in the US.

“We know a safety net is not a sustainable solution. Systematic change like the child tax credit are a more sustainable winning strategy,” said Jones. “I remain optimistic because for the first time in a long time, because things are so hard, we do have the will to get this done for our kids.”

Philabundance has provided 70 thousand culturally responsive meals to Afghan refugees, and provided food during Ramadan so Muslim families had food to break their fasts.

Expansion of the credit is tied to the $1.7 trillion Build Back Better bill currently being debated by Congress: the child tax credit would add an estimated $105 billion per year to the budget, said Michelle Dallafior, Senior Vice President of Budget and Tax at First Focus on Children.

“We are at an incredibly pivotal moment for our nation’s children,” she said. “We urgently need to pass the Build Back Better Act.”

“Support for children is too often viewed as something that can be cut when negotiations are under way,” said Dallafior. She noted that there is standalone legislation for the child tax credit that exists in both the House and Senate, which would separate it from the Build Back Better bill, but the probability of getting a standalone bill passed was not high.

“The moment is now, and our Congressional Champions feel the same way: we just can’t leave kids behind,” said Dallafior.