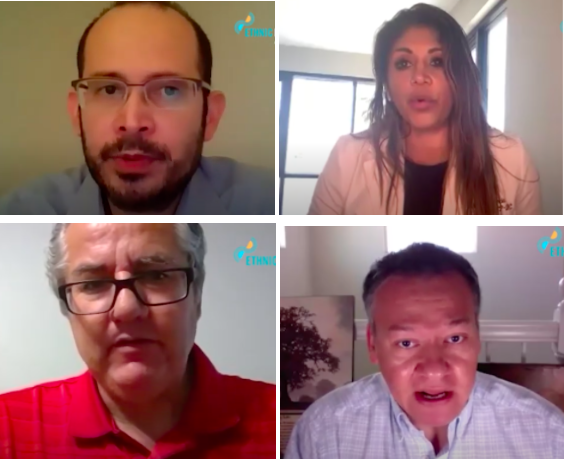 Also available in Chinese and Korean.

These same variables also explain why standard COVID-19 public health protocols tailored to the middle class are unlikely to flatten the curve much less bend it in the county.

“All these years we kicked the can down the road – now we’ve run out of road,” said longtime community activist Luis Olmedo, CEO of Comite Civico del Valle Inc.

Imperial – with 88% of its population Latinx – hugs the border with Mexico and Arizona, making it both heavily agricultural and a typical border economy with a massive cross border movement of products and people every day.

“The guidelines and policies on the pandemic were developed in a way that applies largely to the middle class that can afford to stay home or miss work,” said Edward Flores, a sociologist at UC-Merced. “They’re not addressing the reality of (a certain number of) people who have to work, regardless of the situation” – people Flores calls “distressed workers.”

Flores released a new report “Hidden Threat” co-authored by Ana Padilla, director of the Community and Labor Center at the University, during a recent news conference organized by Ethnic Media Services (EMS).

The data indicates that a high level of “worker distress” – making less than a living wage and living in large households – is related to COVID-19 positivity rates. Some 35.8% of households in the county have workers who earn less than a living wage – the third highest rate in the state -- and the average household size is three persons, which is the fourth highest in the state, according to the report.

“There is a striking relationship between these variables,” Flores added. “In most counties where those two measures are larger than the average of the state, there is also a higher number of COVID-19 infections.”

“Stay at home” orders have proven relatively ineffective in counties with large populations of “distressed workers,” according to Flores’ analysis of 1.5 million records of COVID tests by the Centers for Disease Control. “During the state at home, COVID fell for all groups except for Latinos, whose rates rose continuously during that time.”

Community advocates have begun pushing for strategies to deal with the pandemic that are tailored to the county’s endemic poverty and lack of resources.

In June, when local officials began moving towards reopening the county in keeping with the lower infection rates of other counties, more than 2,000 residents signed a letter of protest, asking the County Board of Supervisors to keep the “stay at home” phase in place.

“We believe it’s an artificial choice between economic stability and public health,” said Luis Flores, an activist with the Imperial Valley Equity and Justice Coalition which spearheaded the letter signing drive. “We are also not exceptional. What we see here is a dramatic version of the inequalities common in immigrant and low-income communities across the country.”

The letter and the media coverage it received caught the attention of Gov. Gavin Newsom who pushed the county to move back its reopening plans. But activists argue that the most vulnerable workers who can’t stay at home need other measures to be protected.

“We are pushing to hold large scale retailers and agricultural companies accountable, we are pushing for eviction moratoriums, and for more protections in the workplace,” said Flores of the Justice Coalition.

A typical “medically underserved” community, Imperial County lacks speciality care providers and enough medical personnel to cover its needs, said Janet Angulo, director of Public Health for Imperial County. “We have a lot of residents who seek medical care in Mexicali on the other side of the border,” she noted. “Mexicali is larger, has more hospitals and speciality care providers. It’s also a very short drive.”

Angulo reports that the county has had more than 7,700 COVID-19 cases and 132 fatalities since the start of the pandemic, and the infection rate continues to rise. Over 500 patients have been transferred to hospitals outside the county through mutual aid agreements. Patients who need care but aren’t critical are being treated in the gym of Imperial Valley College, Angulo said.

Making matters worse is the fact that many residents who already suffer from diabetes or other illnesses that make them more vulnerable to infection don’t know how to manage their conditions, according to Michelle Garcia, a nurse practitioner with Calexico Wellness Center. “They don’t take their glucose levels, they don’t know how to eat properly, and they don’t get the appointments they need,” she said. “Many don’t have smart phones so video consultations may not be possible.”

As a border county, Imperial County has a “day population” of workers crossing over every day to work in the fields. Armando Elenes, Secretary Treasurer of the United Farm Workers (UFW), says infection rates are rising among farm workers, not just in Imperial County but across the state. Letters sent to agricultural companies and contractors warning that safety measures needed to be put in place “went largely unheeded,” Elenes said, “and now we’re seeing the effects of that.” Elenes says that some employers refuse to pay workers when they are infected, blaming them for not taking care of themselves. Both undocumented and guest workers “work in fear” that they will lose their jobs if they complain about the virus, he says.